I am now the owner of a keggerator. How incredible is our society that I, once a mere beer consumer bound by bottles and cans, can now drink fresh cold beer in the warm confines of my very home? Incredible I say!

Guys, thanks to some extreme generosity on the part of my parents, I am now the owner of a  keggerator. And, after a few rounds of thoughtful “in-home testing”, I can safely recommend you get one too! How incredible is our society that I, once a mere beer consumer bound by bottles and cans, can now drink fresh cold beer in the warm confines of my very home? Incredible I say! I’m drinking a cold draft beer as I type these very words. THESE VERY BEER-SOAKED WORDS.

So, how does this whole thing work? To keep beer fresh in a keg you need two things: pressure to keep it from going flat and temperature to keep it from getting warm. That’s really all a keggerator is: a fridge, a keg, a CO2 tank, a faucet, and some tubes to connect it all together.

It’s a pretty neat set up: 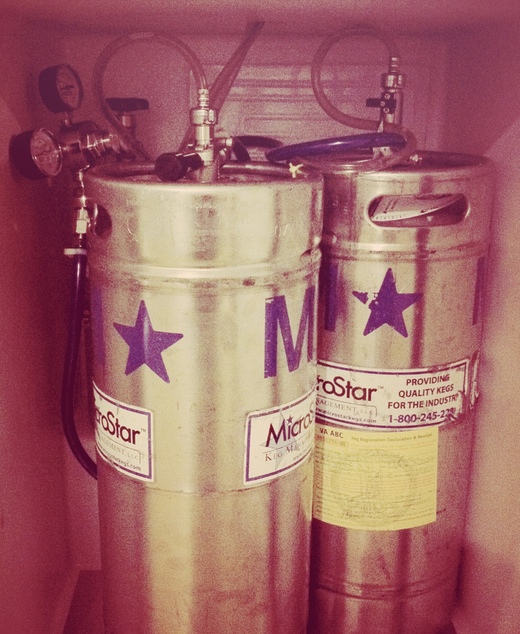 This particular keggerator is set to hold two smaller, but still delicious, kegs. An aside: the kegs you see above are “sixth barrels.” Regular sized kegs — the ones used for keg standing while your significant other holds your legs — are “half barrels.” A full barrel? Does such a beast even exist? Does a fridge voluminous enough to contain its monstrous rotundity exist? CAN GOD CREATE A KEG SO BIG HE CANNOT LIFT IT? Anyway, two taps! It requires some extra equipment, but guys, totally worth it!.

Currently on tap in my basement: Legend Lager and Brooklyn Brown Ale.

If you’re thinking about acquiring one of these frothy beauts, there are a couple of local business worthy of your patronage for the supplies you will inevitably need.

First: occasionally you’ll need to fill your CO2 tank with cee-oh-two, AKA carbon dioxide. This is easily, and pleasantly, accomplished at Richmond Oxygen. Our inaugural trip there was most certainly the best customer service experience we’ve had in the last six months. I will, briefly, reenact it for you in screenplay form:

Plus, while I was in there another customer asked me “Whatchya got there? Nitrous for your car?” — which is awesome that I can pass for that kind of guy. When I told him it was for beer he said “My man!” Solid work, Richmond Oxygen, solid work.

Also, and obviously, you’ll need kegs. OF BEER. There are lots of places you can acquire a keg of beer, but my personal purveyor is Once Upon a Vine. They’re local, knowledgeable, and as pleasant as a peach to interact with — locations on the North and South sides of the River!

Now, to close, I leave you with some bullet points: