The Banh Mi Throwdown is complete, and the judges have spoken. In the Café Gutenberg v. The Boka Truck battle over the best non-traditional banh mi sandwich, Café Gutenberg was victorious!

The Banh Mi Throwdown is complete, and the judges have spoken. In the Café Gutenberg v. The Boka Truck battle over the best non-traditional banh mi sandwich, Café Gutenberg was victorious! The Shockoe Bottom restaurant won Monday night by a landslide in the vegan category and by only nine points in the meat category. Judges scored on appearance, taste, texture, balance, and overall score.

Emcees for the evening were Vickie Mullins and John Reinhold, who manned the bullhorn. As he introduced the judges, Reinhold quipped, “I was told to say, ‘Robey will put anything in her mouth once.’”

In their commentary, all the judges noted that the French baguette from Jean Jacques used by Café Gutenberg was too hard for the sandwich and that Boka’s banh mi’s had too much mayonnaise. Boka used three different types of aioli in each sandwich. What generally makes Boka’s cuisine unique and creative might have been its downfall last night: too many ingredients. I was writing furiously and didn’t even get them all down as Harris listed them. 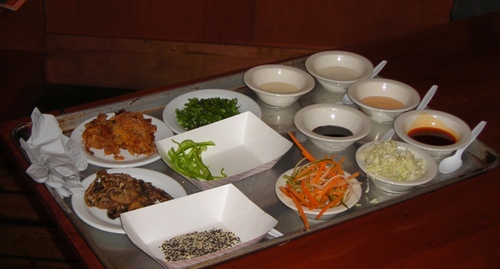 Guard liked the caramelized tofu from Twin Oaks and the layering effect of the Gutenberg veggie, but he thought the Boka veggie’s filling was too monotonous. After expounding some more, he ended suddenly, gesturing to the next judge, Chef Basch from Savor with, “But what do I know, here’s a real chef!”

Basch thought the “bread was the weakest component” for Gutenberg and that Boka’s was “messy.” Judge Mekong liked the neat appearance of the Gutenberg sandwich and the big slices of cucumber. Martin noted that Boka won her vote by 1 point because of the soft bread from Catina Bakery, but that the Gutenberg presentation looked “cleaner.” 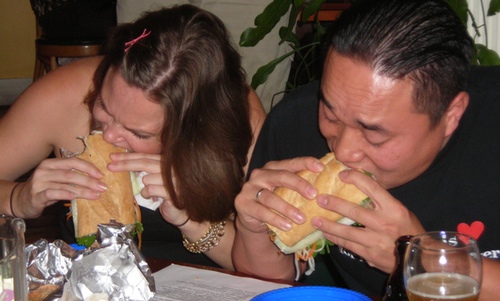 As for my favorites, I liked both the vegan versions better than pork. I was surprised by the complex flavors of the mushrooms in the Boka banh mi (and I don’t love mushrooms) and agreed that both of his sandwiches needed more crisp veggies. The vegan Gutenberg had well-balanced spice and tasted similar to other tofu I’d had from them.

After I told Mindell that Harris had used mushrooms for his version she exclaimed, “He didn’t use tofu? Ooh, that’s sneaky!” she said with a laugh.

Other bystanders also raved about Boka. “I noticed the toasted sesame seeds, the heat, and the buttery, crispy baguette,” remarked Jeanne Nuara.

After tallying the votes and declaring Gutenberg the winner in both categories, Mullins chimed in with “But Boka will bring it to you,” which elicited a loud cheer from the audience. The audience vote applause-o-meter was pretty even, which showed just how successful each competitor was. Everyone in the audience seemed to have a different favorite.

$200 in donations from the audience was raised for two charities dedicated to improving nutritional education and healthy foods for children in schools: Chefs Move to Schools and Lunch Boxes 4 Life.

@bokatruck tweeted the next day:

The Banh Mi Throwdown was a win win, because both competitors learned how to make their sandwiches better.

I hope to see it on the menu soon.