We’ve had cookies, matzoh, and cake. Now, on this the last day of Baker Bash!!! we bring you something a bit unexpected. Ladies and gentlemen, Matt Brehony and his Jalapeño-Cheddar Scones.

We’ve had cookies, matzoh, and cake. Now, on this the last day of Baker Bash!!! we bring you something a bit unexpected. Ladies and gentlemen, Matt Brehony and his Jalapeño-Cheddar Scones.

But before we get to the eats, here’s Matt’s clever bio:

Matt Brehony has been eating food since the day he was born (even before then, if you count that whole umbilical period). He spent six years writing press releases, concepting ads and making coffee for a celebrity restaurateur in New York City. Matt now lives in Richmond where, in addition to being a freelance writer, he serves as a bartender and “Minister of Propaganda” for Secco Wine Bar in Carytown.

Now on to the scones!

Until a couple years ago, I had no love for scones. Every one I tasted was hard, dry and nearly flavorless — like biting into a chunk of drywall dotted with cranberries. The only explanation I could muster for their popularity was that the scone was still benefiting from its regal reputation as a staple of high-society tea parties. And while old English ladies in fancy hats may have taught the world all it knows about proper etiquette, their culinary contribution leaves a lot to be desired (cucumber sandwiches–are you kidding me???!!!).

That whole impression went out the window the first time I had the Jalapeño-Cheddar Scones at Choice Market in Brooklyn, NY. It was like no scone I’d had before — the texture was buttery and flaky and the flavor…well, it HAD flavor — amazing flavor at that. This is a showstopper of a scone — crashing the tea party in a low-cut satin dress, flirting with all the gentlemen and playing a furious rag on the pianoforte.

Though I was unable to track down the official Choice Market recipe, the following is a pretty accurate approximation. I should warn you that these things are pretty addictive (and not just to humans, as evidenced in the picture below). In fact, the number one result for a Google search that included the phrases “Choice Market” and “Scones Recipe” was a website claiming to have the best formula for crystal meth. No joke, try it yourself (uh, the Google search, that is…not the meth recipe). 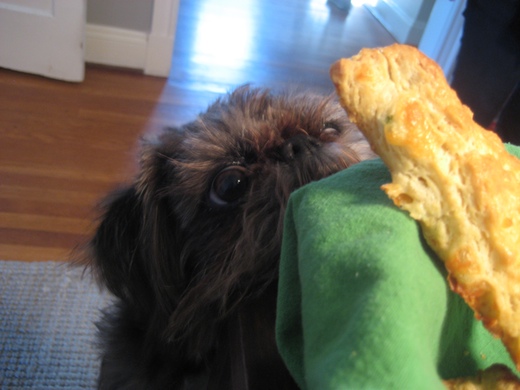 Melt 1/2 tablespoon of butter in a skillet and sauté jalapeños until soft (roughly two minutes). Set aside to cool.

Meanwhile, combine 2 cups flour, baking powder and salt into a large bowl. Add remaining butter and, using a pastry blender, two knives or (my preference) your hands, break the butter up into small, pea-sized bits. This is what creates the flakey texture.

Once cooled, combine the the jalapeños and cheese in a small bowl. Sprinkle in one tablespoon of flour and mix to coat.

In a third bowl, lightly whip two eggs and the cream together and add it to the flour mixture. Fold with a wooden spoon until completely combined. Add the jalapeño/cheddar mixture and stir until evenly distributed.

Turn out the dough onto a well-floured surface and gently knead for just under a minute. Pat dough out to a 3/4- to 1-inch thickness and cut into 8 even-sized triangles. Make an egg wash by beating the remaining egg with a teaspoon of water.

Brush the scones with egg wash and place on a parchment-lined or well-oiled baking sheet, trying to keep about an inch of space between each one. Bake for 25 minutes or until golden brown.

Tomorrow is The Day! First thing Friday morning we’ll recap the posts and you’ll get the chance to cast your vote in Baker Bash!!! Keep an eye out…