Ask Weather Dan: Why does the wind blow?

One reader asks: I was wondering where wind comes from. I know, it blows around and whatever scientific term there is to describe the phenomena, but how does it start? In the first place? All I can picture are the cartoon weather clouds with faces, or Father Winter, a blast of icy air coming out of his cherubic cheeks.

I was wondering where wind comes from. I know, it blows around and whatever scientific term there is to describe the phenomena, but how does it start? In the first place? All I can picture are the cartoon weather clouds with faces, or Father Winter, a blast of icy air coming out of his cherubic cheeks. Put a dumb girl out of her misery and ‘splain it to me, Ricky.

Granted, this isn’t nearly as cool to talk about as the Wilco show, but I think it’s pretty important.

The tl;dr version is simple: pressure gradients cause air to move, the Coriolis force (keep reading if you need to know more about that) alters the direction of the air due to the rotation of the Earth, and friction slows wind speeds near the surface. The longer answer is slightly more involved.

There are a couple basic concepts we need to talk about before we get into what exactly causes wind.

First, we need to remember that air, just like all gases and liquids, is a fluid. In simplest terms, ‘fluid’ defines a substance that has a tendency to flow and to conform to the limits of its container. It’s why we can store substances like water and air in containers of various sizes and shapes, like glasses, tanks, and even airplanes.

In the environment, fluids tend to respond to several natural forces. The first is gravity. Just as water flows downhill, the gravitational force is stronger at the earth’s surface than it is 10,000 or even 30,000 miles in altitude. “Air” itself is a mixture of approximately 78 percent nitrogen, 21 percent oxygen, and one percent other, less-prevalent gases. Gravity keeps more molecules of this mixture of gases closer to the surface, so there’s more air per unit volume at somewhere like Virginia Beach (which is very close to sea level) than there is at somewhere like Denver, Colorado. Because Virginia Beach is closer to the center of the earth than Denver is, the force of gravity is stronger and pulls more air to the surface.

So why doesn’t all the air just get sucked down to the surface of the earth by gravity, leaving no atmosphere at all? Each molecule has something called kinetic energy – the molecules are constantly bouncing around, off each other, off the surface of the earth and all the things on it, including you and me. The amount of kinetic energy something has is described by how much mass and velocity it has. Molecules typically have very little mass – a molecule of diatomic oxygen, which exists in nature as two atoms of oxygen, has a mass of about 5.313×10-23 grams, which is almost infinitely small. This means that in order to sufficiently resist the pull of gravity and find equilibrium hovering at some point above the earth, these molecules must have a very high velocity.

As a result, what we wind up with is a column of air rising up from the surface. Because gravity pulls more of the air molecules down to the surface, the molecules are more tightly packed at the surface and density decreases with altitude. As one goes higher through the atmosphere, there’s more empty space between the molecules.

Now that we understand what’s going on in the atmosphere, we can talk about what makes it move. In the simplest sense, that’s what you’re feeling when the wind blows – it’s the movement of air molecules from one location to another. Horizontal movement of air is primarily caused by differences in air pressure. Air pressure changes with altitude; you feel these changes when you feel your ears pop as you climb a mountain or rapidly descend in an airplane. Over horizontal distances, pressure changes cause air from areas of higher pressure in the direction of areas of lower pressure. The causes of pressure changes are far too numerous to list here, but here are some of the primary factors:

Nature doesn’t like pressure differences, so air molecules will move from the areas of higher pressure to the areas of lower pressure in order to establish an equilibrium. The pressure gradient force describes the change in pressure over distance; people often see the lines of equal pressure marked by isobars on a weather map.

The map shows air pressure maximums and minimums, with data values measured in millibars. Millibars are used in scientific settings to measure air pressure; pressure is more commonly reported in the United States in terms of inches of mercury as measured by a barometer. Standard air pressure at sea level is about 1013 millibars, or 29.92 inches of mercury. You can get a good idea of the general strength of the pressure gradient force by looking at the space between the isobars on the maps. If they are more closely packed over an area, the pressure gradient force, and the resulting winds, will be stronger than an area with widely spaced isobars. In scientific terms, the rate of change over distance, and thus the gradient, is less in the latter example.

Compare the map above with the one below, showing Hurricane Isabel just prior to landfall on September 18, 2003. 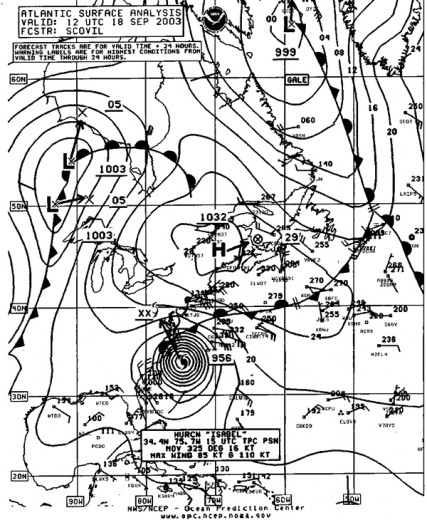 Surface analysis map from September 18, 2003 of Hurricane Isabel just prior to landfall. Image taken from the NOAA Mariners Weather Log. Click to enlarge.

You’ll see the isobars packed very closely together around the center of circulation of Isabel. At the time this map was created, Isabel was packing sustained winds of 85 knots (98 mph), gusting to 110 knots (127 mph). The reported central pressure at the time was 956 millibars; the isobar that passed across the Delmarva, just south of the “XX” equates to 1016 millibars – that’s a difference of 60 millibars over a very small distance, and as you can see, it caused some very significant wind speeds, and as I’m sure anyone who was in eastern Virginia when Isabel passed through can recall, it led to significant wind damage across the region.

However, there are more forces at play here. While the pressure gradient is the force that determines the magnitude, the direction of the wind is an important factor. In Richmond, northwest winds typically bring cool, dry air off the Appalachian mountains. Southwest winds bring warm, moist air from the Gulf of Mexico, and northeast winds tend to bring cool, moist air from the North Atlantic. The position of areas of high and low pressure do a lot to determine the general direction of where these winds come from, but that’s not all. There’s also the Coriolis Force.

Named for Gaspard-Gustave Coriolis (1792-1843), you probably know the Coriolis force better as the force that determines why the water in your sink and toilet bowl flow down the drain in a counterclockwise direction.** The Coriolis force isn’t a force in the traditional sense; it doesn’t do work on a body like gravity does. As the earth rotates, the Coriolis force deflects the motion of the air. In the northern hemisphere, this deflection occurs to the right of the direction of motion.

The rotation around low pressure systems occurs because of the deflection caused by the Coriolis force. The direction of the wind changes as the equilibrium between the pressure gradient and Coriolis forces change, and the air finds a balance in rotating around the center of low pressure.

Near the surface, friction also affects wind speed. As the air molecules near the surface bump off of each other, and all the things on the surface – trees, buildings, landforms, cars, people, etc. – the friction caused by rubbing against and bouncing off these surfaces slows the overall wind speed down. We see this especially in urban settings, like at the top of tall buildings. Winds may be very light at the base of that building, but as you rise above the objects nearby, the wind is no longer influenced by their existence and can flow freely.

So that, in a nutshell, is wind. Pressure gradients determine the speed and direction, the Coriolis force causes rotation around centers of low pressure, and friction near the surface slows things down for those of us who like to stay walking upright.

If you’ve made it this far, thanks for not ditching me for Wilco.

*Alexandra’s desire to remain pseudonymous was her choice; she wanted to avoid the public shame of asking this question. Personally, I think it’s a great question that deserves some discussion. I’ll leave it up to her if she wants to out herself in the comments.

**While this is what you were likely taught in school, it is patently not true. The scales that exist in your sink and toilet aren’t really large enough to be affected by the Coriolis force. You can test this yourself by using your hand to spin the water in the opposite direction, though I recommend only trying this in your sink. The flow in bathroom fixtures is determined by the shape of the container and the direction the water is flowing out of the tap.