It’s important to note that it’s not just topography that makes certain regions more tornado-prone than others. The primary factor is the interaction of atmospheric elements on small scales. Oklahoma is flat, but so are parts of eastern Virginia and North Carolina, and they don’t see nearly the number of tornadoes that Oklahoma or Texas do. It’s because the right atmospheric ingredients, namely large amounts of moisture interacting with an incredibly unstable atmosphere, can come together to form violently rotating columns of air. There’s a specific field in meteorology called boundary layer meteorology that studies all of the factors and processes that determine how the lowest few kilometers of the atmosphere works.

Within boundary-layer meteorology, topography plays a role in tornado frequency. This map from the National Climatic Data Center shows the average number of tornadoes per year from 1953-2004.

We can see a lot of things that we would expect to see in a map like this – the states with the most tornadoes are concentrated in the southern Plains, following the traditional definitions of “Tornado Alley.” Other areas, namely the mid-Mississippi Valley and Gulf Coast regions see high numbers of tornadoes, as does Florida. Florida’s numbers are buoyed by the tornadoes embedded within landfalling tropical cyclones.

Fun fact: Hurricane Ivan (2004) holds the record for most tornadoes caused by a landfalling tropical system with 117. Ivan was responsible for 40 tornadoes in Virginia, the most in any state, setting the single-day record for tornadoes in the Commonwealth.

The only state to average less than one tornado per year was Alaska, and that’s not because of topography alone. It’s also not to say that tornadoes never happen in Alaska, because one did touch down in April 2005.

Recently, Michael Frates, a geographer at the University of Akron, took a look at the spatial distribution of strong (rated F3-F5 on the old Fujita scale), long-track (greater than 20 miles) tornadoes. His research, presented at the annual meeting of the American Association of Geographers, identified four distinct areas of high concentration of strong, long-track tornadoes. 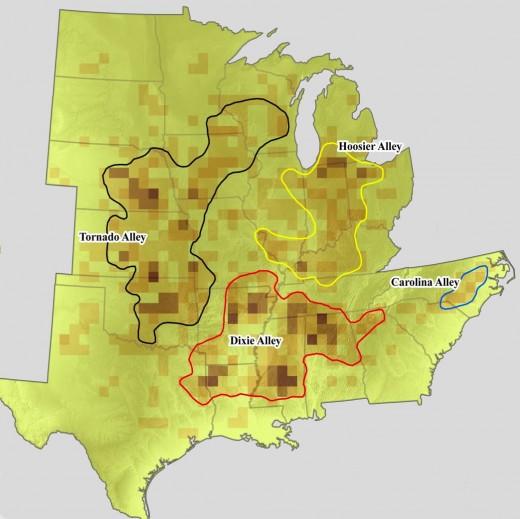 As we start looking on smaller scales, we find that even though topography does affect tornado frequency. it doesn’t completely negate the possibility of tornado formation. The National Weather Service office in Sterling, VA put together this map of tornadoes from 1950-2000 by county.

Again, we see the trends that we would expect – the majority of tornadoes fall across the eastern 1/2 of the state, roughly following the boundary between the Piedmont and Blue Ridge regions. The important thing to note here is that along and west of the Blue Ridge, the number of tornadoes seen in a majority of these counties is not zero. Western Virginia has become the target of tornadoes several times in history.

The Virginia Department of Emergency Management has more information about the above tornadoes, as well as many tornadic events in Virginia as far back as 1776.

While topography does influence how often tornadoes form, other stronger atmospheric processes determine where and when tornadoes form, meaning even those is rugged mountainous terrain are at risk. Storm systems that generate tornadoes over Oklahoma rely on large amounts of moisture from the Gulf of Mexico and high quantities of atmospheric energy which aren’t always available once systems cross the Appalachians. However, if those systems remain intact, people from Cumberland Gap to Cumberland County and points far beyond are equally susceptible to tornadoes.