One readers asks, “Why is RIC the default weather station for the area? It’s in a less densely populated area and seems to receive different amounts of precip and have different temps than the rest of the metro area.” Come get your learning on!

Andrew submitted this question in the comments of one of my recent weather posts:

Why is RIC the default weather station for the area? It’s in a less densely populated area and seems to receive different amounts of precip and have different temps than the rest of the metro area.

There’s a bit of history involved in this question.

Prior to the Civil War, over 500 locations  were voluntarily reporting weather observations via telegraph to the Smithsonian Institution. Many of these stations were forced to cease operation following the outbreak of war, but President Grant signed into law the act creating the predecessor of the National Weather Service on February 9, 1870.

Under the direction of the US Army’s Signal Service, the first full-time weather offices in Virginia were established in Norfolk and Lynchburg during 1871. In 1890, the nation’s weather enterprise was transferred to the Department of Agriculture and renamed as the United States Weather Bureau. 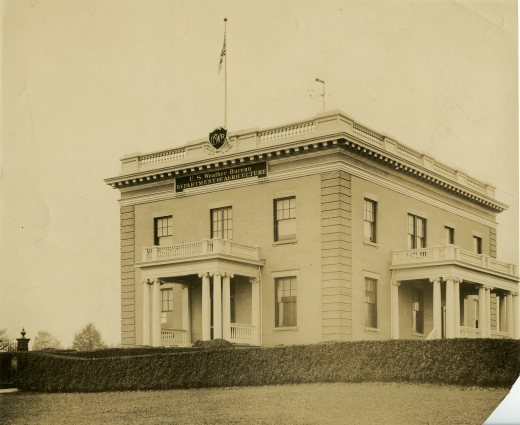 The US Weather Bureau established its first Richmond office in October of 1897. They set up in the Chamber of Commerce building at the corner of Ninth and Main Streets, and bounced around a couple of times before moving into a permanent office in Chimborazo Park. The original Chamber of Commerce Building was demolished in 1912. 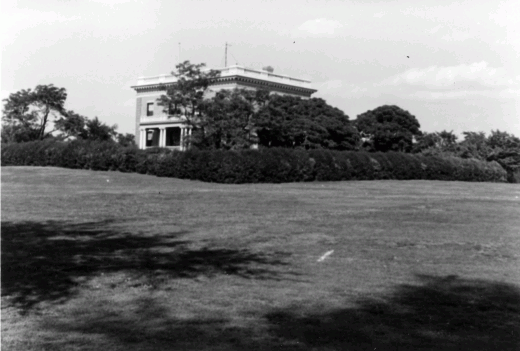 The Chimborazo Park office was finally closed in 1959, and transferred to the National Park Service as part of the Chimborazo Medical Museum. The building still stands today as the visitor center at Chimborazo. You can still see the US Weather Bureau shield and nameplate across the top of the building, though they have been painted over and replaced with “Richmond National Battlefield.” 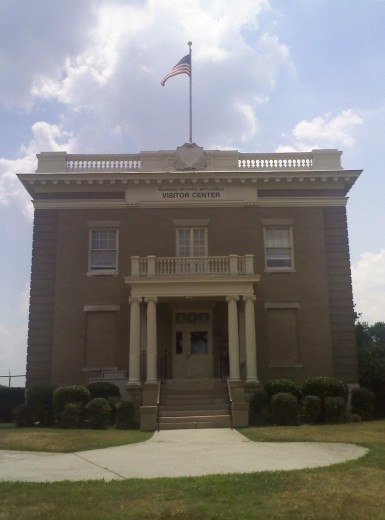 The US Weather Bureau office today, converted into the Visitor Center for the Richmond National Battlefield Park. Click to enlarge. (Credit: Dan Goff)

In the meantime, the Weather Bureau also established an office at what was then known as Byrd Field in July 1928. The office there recorded observations in addition to the Chimborazo office, but was twice closed: once from 1935-38, and again from 1942-45, when it was converted into an Army Air Field during World War II. The staff and functions of the city office were relocated to Byrd Field when the Chimborazo Office was closed in 1959. Bill Sammler, the Warning Coordination Meteorologist at the National Weather Service’s Wakefield office, explained that opening of the Byrd Field office was driven by a need to provide meteorological support for aviation activities. It is unknown why the Chimborazo office closed, however.

In the early 1990s, the National Weather Service (renamed from the Weather Bureau in 1969) began a campaign to modernize, automate, and consolidate their facilities, spending $4.4 billion to reduce their forecast offices from over 250 down to just 116. At the time, forecast offices were located in Norfolk, Richmond, Roanoke, and Sterling, and an opportunity was seen to consolidate the Richmond and Norfolk offices into one centrally-located space that could serve both regions. In addition, each of the new offices, located in Blacksburg, Sterling, and Wakefield received new WSR-88D Doppler radar units. Had it been installed earlier, according to National Weather Service meteorologists interviewed at the time, the Doppler radar unit in Wakefield could have detected the 1993 Colonial Heights tornado earlier and allowed residents to receive earlier warnings and have additional time to prepare.

The Richmond International Airport office gave its last local forecast on August 5, 1994. The Sterling office temporarily handled forecasting duties for the region until the Wakefield office came online in August 1995. The observations previously taken by meteorologists at RIC were replaced by an Automated Surface Observing System (ASOS) unit that was commissioned on October 1, 1995. The Norfolk office was closed around the same time, and its operations were also consolidated to Wakefield. The Wakefield Doppler radar was turned on in July 1994, and the office commissioned on August 17, 1995. The WSR-74 unit at Volens, Virginia, that was previously providing coverage for most of the state was decommissioned on December 1, 1995.

So where are we now?

The need to provide support for the aviation community led to the establishment of the Weather Bureau office at Richmond International, and though consolidation has closed the office, that same need drove the decision to install automated observing equipment at most of the commercial and general aviation airports around the Commonwealth.

A location in the city, however, would suffer from other influences, namely an effect called the Urban Heat Island (UHI). In essence, the UHI describes an “island” of heat created by the development of a city compared to the surrounding rural areas. According to the American Meteorological Society Glossary of Meteorology, the heat created by a city can increase the annual mean temperature by 1-2 degrees Celsius, and on calm, clear nights, the temperature may be up to 12 degrees Celsius (that’s more than 21 degrees Fahrenheit!) warmer than the surrounding area.

Precipitation measurements are even more difficult. Because of the geographic variability of Richmond — the dense city, sprawling suburbs, and rolling farmland — all located in a relatively small area, it’s going to be hard to take an observation at just one location and get a representative sample. This question was written not long after the snowfall of this past winter, when it wasn’t uncommon to see measurements vary by several inches from east to west or from north to south (or in all four directions at the same time), and in a radial distance from the city. Taking a measurement in either extreme fails to completely represent the snowfall received in the area, and finding a median observation fails to take into account the extremes. From an observer’s standpoint, its frustrating for me to watch and know that the official data reported to the National Climactic Data Center isn’t completely representative of the area.

Now that we’re into the summer thunderstorm season, that variability increases even more. How many times have you had a thunderstorm drop buckets upon buckets of rain at your house, but your office 5 miles away, or even your neighbor down the road, barely saw a drop? It happens just as much at the airport as it does anywhere else.

The solution, in my opinion, would be to take observations  from multiple locations in the region, and average these to determine climatology for the region. Records could be kept for each individual stations and used for tracking extrema. Is this a viable solution? Not really. The expenses required to select locations, and install and maintain automated weather observing equipment would be prohibitively expensive. The National Weather Service and its parent organization, the National Oceanic and Atmospheric Administration, have been under the threat of budget cuts for the last several years, and have many projects that would take priority over anything of this magnitude.

History and need have dictated why our official observations are taken at the airport, but it’s not the only data we have. Volunteer programs like CoCoRAHS have a higher resolution of data points and provide valuable information to meteorologists and the public. While they may not be part of the official climate record, they give us another great picture of a region’s climate.