Exit winter. But, before we forget about it completely, let’s talk about the gamut of other precipitation types that we can see in winter, from fun things like thundersnow and graupel to freezing rain and just plain rain.

In my last installment, I talked about the conditions that are necessary for snow and winter precipitation in general. This time around, we’re going to tackle a gamut of other precipitation types that we can see in winter, from fun things like thundersnow and graupel to freezing rain and just plain rain.

Before I get completely away from snow, let’s talk about thundersnow. 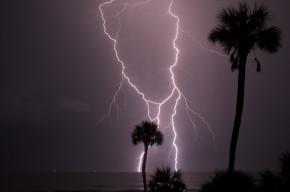 I’d like to think Ke$ha is thinking about lightning when she sings “hot and dangerous….” (Photo/Charles Roop Flickr)

In the most basic sense, thundersnow is simply a thunderstorm where the precipitation all falls as snow instead of rain, but that’s not really an accurate depiction of the differences between the two. A typical thunderstorm is driven by the heating of moist air near the surface. As areas of air around the surface are heated and become warmer than the surrounding air, they rise and can reach in upwards of 40,000 feet above the surface in some cases. During thundersnow, however, most of the action takes place up in the atmosphere rather than at the surface, and doesn’t rely as heavily on differences in heating. Instead, other forces in the atmosphere, well above the surface, can force portions of a snow layer upwards. These bulges in what is normally a flat snow layer can intensify the snow formation process, and interaction between particles in the forced regions can create charges of static electricity, much like in a regular thunderstorm, that will lead to lightning.

Think back to the layer cake analogy from last time. Normally during a snow event, the layers in the atmosphere that make up the “cake” are flat and the boundaries between layers are mostly horizontal. When lift happens, the top of the snow layer will bulge up into the layer above it, interacting with the colder air above. Snowfall rates can become quite intense during thundersnow events, with snowfall rates of up to four inches per hour, creating conditions where visibility is virtually nil; all one can see is snow in all directions. To say that events like this can be hazardous would be an understatement.

But what else can fall from the sky?

One of my favorite precipitation types is graupel. It’s a German word that roughly translates to “soft hail.” When graupel falls, it looks like either soft pellets of hail or snow. I like to think of it as what would happen if someone were to seed clouds with Dippin’ Dots. 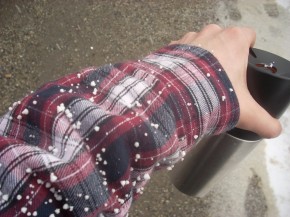 Graupel is created when a snowflake forms and falls through a layer of supercooled liquid water droplets. When snowflakes pass through one of these layers, the water droplets will become attracted to the ice crystals (snowflakes) and then freeze to the surface of the crystals. This process of ice accumulation is called riming, and if enough water freezes to the surface of the ice crystal, it will lose the appearance of a regular snowflake and become pellet-shaped, and can be up to 5 millimeters in diameter. I’ve only seen very small (1-2 mm) pellets in person. Thinking back to the layer cake again, graupel requires two specific layers of our cake to exist. First, we have to have a layer that is cold enough (usually below -10C) and saturated enough for ice crystals to form. As these crystals fall, they then need to pass through another layer in the cake that is again saturated, but consists of liquid water droplets instead. This could be a cold cloud layer below the layer of snow growth; the key here is that this layer also has to be below freezing in order for the water to freeze on to the ice crystals, creating graupel pellets.

By tweaking some of the layers in our cake, we can see other precipitation types as well.

Let’s go back to our initial snow scenario for a moment. We had a saturated layer with temperatures between -10C and -20C, which allowed for ice crystal formation. Every layer of the cake below this was saturated with moisture, which ensured that the ice crystals didn’t evaporate, and the entire stack remained below 0 degrees Celsius. What happens if we change some of these layers?

If we introduce some dry air into one of the layers, then our profile of the atmosphere goes from something like this: 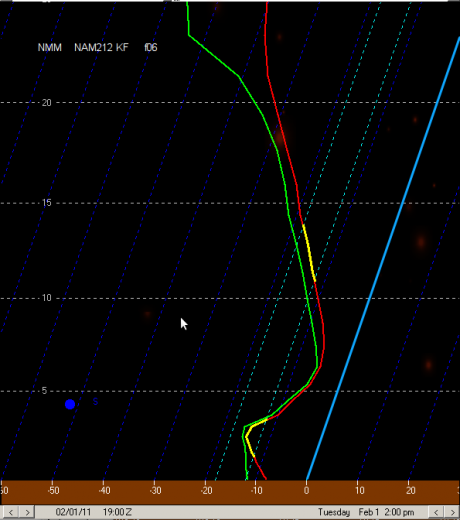 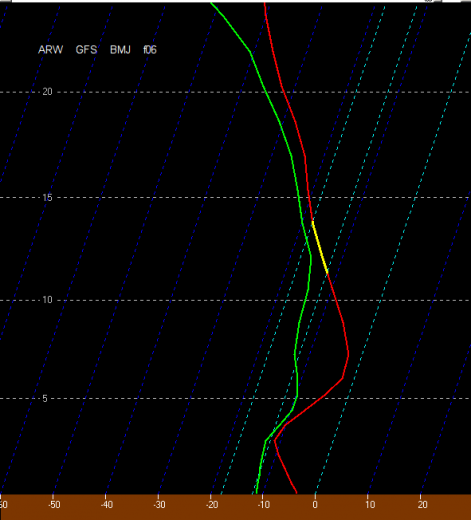 No precipitation is boring. Who wants to read about that? So rather than messing with the humidity and moisture content, let’s change the temperature and see what happens.

If we go colder, then we don’t really make an impact on precipitation. Unless you’re approaching absolute zero, it’s really difficult to change ice crystals – especially when they’re already in the form of snow. However, if we go warmer towards that magical freezing temperature, we can get some different precipitation types – primarily sleet and freezing rain.

Both of these are dependent on an intrusion of warm air. With sleet, a layer of warm, above-freezing air aloft melts the falling ice crystals, which then re-freeze into solid ice pellets as they exit the warm air layer. Now our layer cake looks a little something like this: 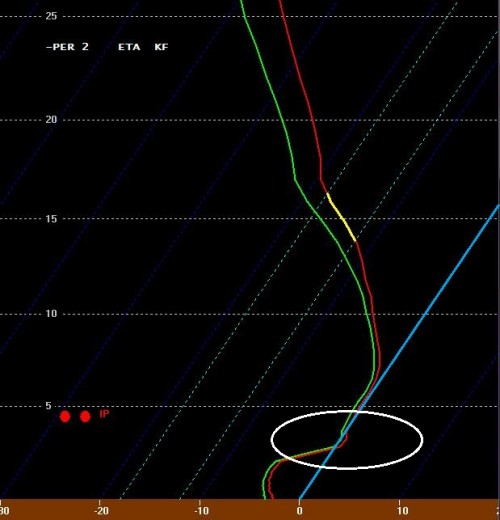 You can see where the temperature profile now is, ever so briefly, to the right of the 0 degrees Celsius line. It doesn’t take much, as that little bit of warm air is enough to melt the falling snowflakes, and then they abruptly refreeze as the temperature drops back below 0C. Meteorologists will often call this a “warm nose” as it juts out over a layer of colder air below it, and gives the profile a bit of a face-like appearance if viewed from the side.

Freezing rain is similar, but requires a bigger warm pool. Freezing rain melts thanks to a warm layer just like sleet, but thanks to an excess of warm air, the liquid drops aren’t able to refreeze until they actually reach a surface that’s below freezing, like the ground or your car. 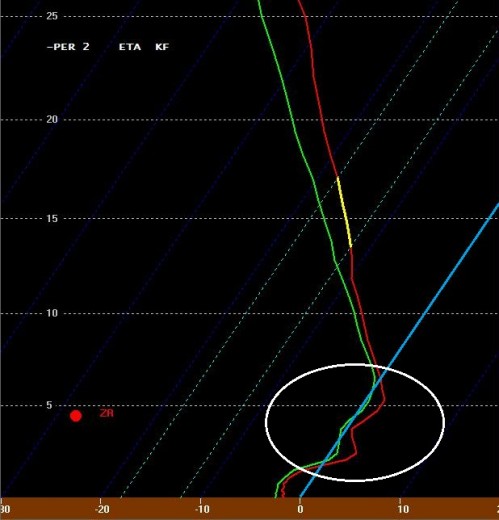 There’s no real hard and fast definition to tell the difference between sleet and freezing rain when you’re looking at a temperature profile like this; generally, however, as you add more warmth and more height to a warm layer, the more likely it is that you’ll see freezing rain rather than sleet.

Unlike the other precipitation types, freezing rain doesn’t require ice crystals to develop. Rather than starting with ice crystals, if you have a layer of precipitation that develops in liquid form from a region warmer than the snow growth zone that we’ve talked about, but is still below freezing, then these liquid drops will become what is called “supercooled,” which just means that the substance is still in a liquid form below the freezing temperature. Again, once these supercooled drops hit the surface, they freeze on impact and create a glaze of ice across the surface.

We’re at the tail end of the winter precipitation season (which can and often does extend into early spring), but I hope this answers your questions, Scott and Michelle.