One reader asks: “I’ve seen you mention the hurricane hunters on Twitter. I find it really cool that they risk their lives to fly into the hurricane. Can you tell me more about them and what exactly they’re doing in there?”

I’ve seen you mention the hurricane hunters on Twitter. I find it really cool that they risk their lives to fly into the hurricane. Can you tell me more about them and what exactly they’re doing in there?

Outside of the advent of satellites, the Hurricane Hunters have been one of the biggest contributors to the science surrounding tropical cyclones. In meteorology, there’s nothing better than having hard data about what’s going on in all parts of a storm.

And would you believe that it all started as a dare?

In July 1943, during the peak of World War II, US Army Air Corps Colonel Joe Duckworth was stationed at Bryan Field in Bryan, Texas training British pilots in the new technique of instrument flying. The first hurricane of the season, Hurricane One (storms were just numbered, not named, in those days), made landfall near Galveston, Texas on July 26th. It weakened to tropical storm strength and tracked northwest after landfall, heading into central Texas.

Colonel Duckworth was taking some grief from the ace European pilots he was training about the quality of his plane, an AT-6 “Texan” training aircraft. It lacked the allure of the popular fighter planes of the time, and after enough teasing, Colonel Duckworth finally decided that it was time to test his plane’s mettle. He bet the other pilots that he could fly his plane into the storm – a phenomenon that few Europeans had ever experienced on the ground, much less in the air – and return to the airfield, safely. Duckworth grabbed the only navigator on the field that morning, Lieutenant Ralph O’Hair. They hey flew into the tropical storm, penetrated the eyewall, and then turned around and returned to the airfield. Duckworth took the base weather officer, Lieutenant William Jones-Burdick, on a second flight into the storm later that day.

They’ve gone through a number of names and designations since 1943, but the Hurricane Hunters now call the United States Air Force Reserve home, as the 53rd Weather Reconnaissance Squadron, part of the 403rd Wing stationed at Keesler Air Force Base in Biloxi, Mississippi. Crews now fly into storms in WC-130J aircraft, a modified version of the C-130 cargo workhorse designed to carry meteorological equipment. 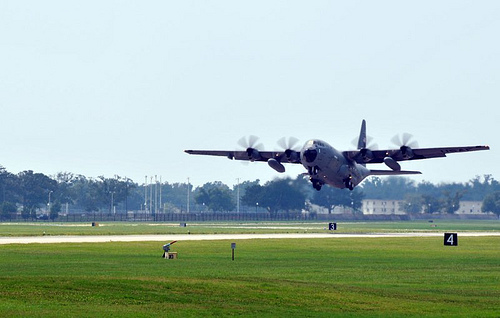 A USAF WC-130J takes off from Keesler AFB in Biloxi, MS on its way to support operations during the 2008 Atlantic hurricane season. (U.S. Air Force Photo/Tech. Sgt. James B. Pritchett)

However, the Air Force isn’t the only group to fly planes into hurricanes anymore. The National Oceanic and Atmospheric Administration (NOAA), parent organization of the National Weather Service, also conducts surveillance missions in addition to the USAF recon flights. Instead of the beefy WC-130Js, NOAA’s fleet includes the WP-3D, a modified version of the P-3 Orion submarine-hunter, and a Gulfstream G-IV jet. The two WP-3D aircraft (named “Kermit” and “Miss Piggy”) fly missions similar to the USAF aircraft: low-level (usually between 5,000 and 10,000 feet) flights. The WP-3D flies a crisscross pattern (called an alpha pattern) to fly through all four quadrants of the storm and the center, in order to locate the center of circulation of the storm. The G-IV, on the other hand, flies a synoptic mission. These are high-altitude (30,000-40,000’) flights to sample the environment for a couple hundred miles in all directions of the storm. Rather than flying into the storm like the other aircraft, they take a sampling of the atmosphere around the storm to help with forecasting both the future track and intensity of the storm. 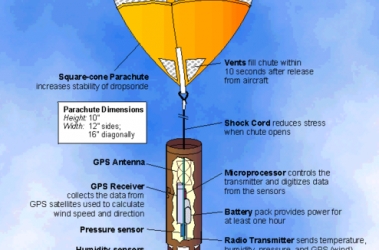 Both the USAF and NOAA aircraft utilize a tool called a dropsonde. Similar to the instrument package launched daily on weather balloons, dropsondes are designed to fall to the surface from airplanes rather than ride into the atmosphere on a balloon. The data these dropsondes collect is ingested into the atmospheric models just like the balloon data.

The recent proliferation of unmanned aerial vehicles has begun to venture into the atmospheric sciences as well. NASA debuted its Global Hawk unmanned research aircraft. Given to NASA by the US Air Force, these two drones have been refitted with scientific equipment and have been used in 2010 and 2011 for, among other things, hurricane research in conjunction with NOAA.

Speaking of, NOAA also recently announced that a new, smaller type of UAV called GALE will enter use next year. Launched from the Hurricane Hunter aircraft, the GALE drones will be used to fly close to the ocean surface in the lowest levels of hurricanes, where it is too dangerous for manned aircraft to fly. Unlike the Global Hawk, which can stay aloft for more than 30 hours at a time, GALE drones will be able to stay in the air for about 90 minutes before dropping into the ocean.

So what is it like inside a hurricane? Enjoy this video of a NOAA WP-3D aircraft flying into the eyewall of Hurricane Katrina in 2005.

While being a Hurricane Hunter seems pretty glamorous, there is certainly quite a bit of risk still associated with flying an airplane into a hurricane. Weather Underground Director of Meteorology Dr. Jeff Masters documented his experience flying into the heart of Category 5 Hurricane Hugo back in 1989. It’s long, but it’s an amazing read.

Hopefully, David, that gives you a better idea of what the Hurricane Hunters are and what they do.