Wilder will not run for mayor

While others continue to watch for clues and listen for rumors, let’s cut to the chase: It says here that L. Douglas Wilder will choose not to run for a second four-year term as mayor of Richmond, Virginia. My prediction is not based on any inside information. It’s just a gut feeling from years of watching […] 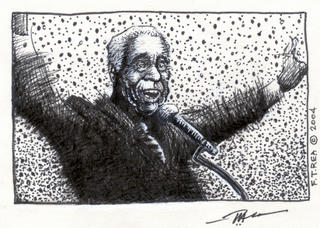 While others continue to watch for clues and listen for rumors, let’s cut to the chase: It says here that L. Douglas Wilder will choose not to run for a second four-year term as mayor of Richmond, Virginia.

My prediction is not based on any inside information. It’s just a gut feeling from years of watching for Doug Wilder’s tricky clues and listening to intriguing rumors about him. In a nutshell, he will opt out because it will be his best option.

At the top of the heap of reasons for Wilder not to run is that this time he could lose.

In 2004, when Wilder campaigned to become Richmond’s first strong mayor in over half a century, everyone knew it was an absolute lock he would win the citywide election. He carried every district. This time, no matter how many times it’s said Wilder will be the favorite to win, again, should he run, he could lose to a good candidate.

In 2008, the tide of good will that swept Wilder into office has receded and left the landscape littered with puzzling episodes of his bumbling and bullying. Wilder’s amazing 80 percent landslide’s mandate in 2004 has mostly been squandered. The disappointment some of his former supporters feel about all that wasted opportunity is easy to hear in happy hour discussions about local politics.

In spite of his legions of diehard supporters, as a 77-year-old candidate, Doug Wilder would be vulnerable. This time, he could lose to a talented candidate with the capacity to overshadow any other contenders. It would take a well-financed, well-executed campaign, but as it stands today it could happen.

However, this analysis/speculation isn’t to promote a particular personality, so it won’t offer any examples of who might be best suited to play this role.

No, what’s being predicted here is that Wilder, who has lost a few steps in his game, still has the savvy to recognize that his running for reelection will hardly be the cakewalk it was four years ago. Moreover, he knows that some simmering stories to do with handling money — supposedly his strong suit — are likely to dog him in the months to come.

With his use of special funds earmarked for relief to do with the Battery Park floods, to pay the expenses for his failed eviction of the School Board from City Hall — as a candidate — Wilder will find himself having to tell voters over and over again why that shouldn’t be viewed as some level of malfeasance.

Then there is the matter of money that apparently disappeared from his 1989 gubernatorial campaign, which has put Wilder in an awkward position. A new campaign law commands him to account for that money in order to get on the ballot again. As his son stands somewhere near the middle of this bubbling brouhaha, Wilder might rather not go through that process. This where’s-the-money? story probably has much less sizzle if Wilder simply walks off the active political stage under his own power.

Other questions about his use of public funds are out there, but the biggest problem Wilder has is probably those steps he has lost. A younger, more charming version of Doug Wilder — in the General Assembly and as governor — could bully others and make them like it. He’d slap them on the back and have them dancing to his tune … that is, after they stooped to kiss his ring.

As far as how he has performed as mayor, in the last four years Wilder has been long on pointing the accusing finger and short on producing solutions to this city’s problems. His perpetual battles with other elected officials have made a lot of wind and noise, while fixing nothing.

Perhaps the baseball stadium issue, which had the Atlanta Braves on hold for years before they finally hung up in January, has been most emblematic of Mayor Wilder’s ineptitude as a problem-solver. While the Braves cooled their heels waiting for leadership in Richmond to lead, speculation for where to locate a new ballpark bounced pinball-like from one part of town to another.

The Friday Fiasco at City Hall is surely the most damning item on Wilder’s list of mistakes as mayor. The mounting legal tab to defend him for those mean-spirited shenanigans is drawing more attention. The taxpayers will have to pay that tab.

Then again, if Wilder retires he can probably do so gracefully, because a lot of people would be happier to dwell on his long career of praiseworthy achievements, rather than his uneven performance as mayor. He could hop aboard Barack Obama bandwagon and have fun traveling to speak in support of the most likely Democratic nominee for president.

So, look for Hizzoner to keep everyone guessing for as long as he can, to reduce the time he’ll be regarded as a lame duck, then announce at the last minute he will not seek a second term. After which, he’ll have a great time keeping everybody guessing, waiting to see who he might endorse as his successor.

In the weeks to come we’ll see if the 77-year-old version of Doug Wilder still has enough of his political acumen left to know better than to wind up his political career as just another sloppy guy who stayed too long at the party.