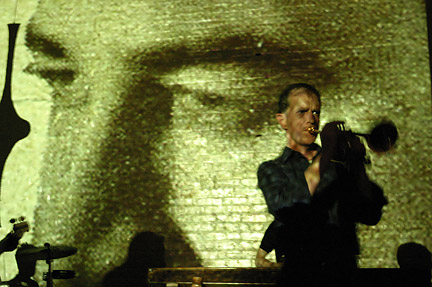 Composer Chris Becker lives and works in New York City composing, arranging, and recording music for a wide variety of solo and collaborative projects. He has composed music for dance, mixed-media installations, and film. His music is a combination of (but not limited to) rock and roll language, indigenous rhythms from Africa, Brazil, and Colombia, and musique concrete. Becker’s CD Saints & Devils (2006) is a suite of 10 tracks inspired by songs, stories and icons of the deep South. Composed, recorded, and mixed by Becker and mastered less than two weeks before Hurricane Katrina struck the Gulf Coast, Saints & Devils includes performances by musicians from New York City and New Orleans. He has received grants from Meet The Composer, the American Music Center and the Louisiana Division of the Arts. More info at myspace.com/beckermusic

Guitarist and composer Lynn Wright’s playing is a unique hybrid of rock, funk and punk influences combined with the musical languages of Africa and Latin America. He has played with New Orleans songwriter James Hall, Latin indie rock band Cordero, composer Chris Becker, and the Berlin chamber-pop ensemble Bee and Flower. He has toured internationally playing guitar with James Hall and The Pleasure Club supporting Rage Against the Machine and with Cordeo supporting the Indigo Girls and Los Lobos. Wright’s current projects include the crowd-pleasing world music collective Gachupín that blends African guitar stylings, Brazilian and Afro-Colombian rhythms, and electric funk era Miles Davis; the New Orleans based instrumental trio Ballroom Dance Is Dead who explore the collision of trance, minimalism and the spirit of John Coltrane; and his original songs project …And The Wiremen who will release their debut CD in 2007. Much of Wright’s recent music for television can be heard on ESPN Deportes and ESPN Networks.

HzCollective Presents: NanoHz No.15 — an evening of experimental and avant garde electronic music. This will be a great night for the Richmond experimental community as we gear up for the MegaHz Festival in October!!!!! Refer to http://hzcollective.com for updates and details!