The Stage Hogs Virginia string band Fries, Virginia and Walkertown, North Carolina Sometimes versatility has its price – in this case, a nickname. Noted Blue Ridge musicians Kirk Sutphin and Eddie Bond – both featured in the National Council for the Traditional Arts’ acclaimed Music From the Crooked Road: Mountain Music of Virginia national tours, […] 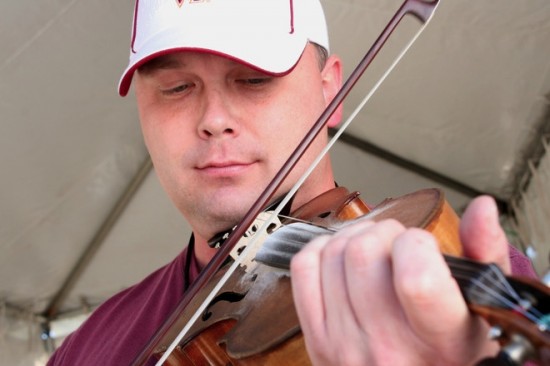 Sometimes versatility has its price – in this case, a nickname. Noted Blue Ridge musicians Kirk Sutphin and Eddie Bond – both featured in the National Council for the Traditional Arts’ acclaimed Music From the Crooked Road: Mountain Music of Virginia national tours, and the 2011 Roots of American Music tour – popped up in so many of the tours’ musical configurations that the other performers jokingly began to refer to them as the “stage hogs.” Now, joined by their friend and accomplished guitar player “Snake” Smith, “the hogs” have made it official. The Stage Hogs recently convened in the studio of famed Virginia banjoist Sammy Shelor to, at long last, record an album that showcases this talented trio of traditional Appalachian musicians.

A master old-time fiddler and banjoist, Kirk Sutphin performs in the Round Peak style long identified with the Galax/Mt. Airy area on the Virginia-North Carolina border. Kirk has deep roots in the tradition. His grandfather, a fiddler and banjoist, was from Round Peak. Famed fiddler Tommy Jarrell, also from Round Peak, spent much time teaching tunes to a young Kirk. The clawhammer banjo style of this area is highly developed, and Kirk’s smooth and seemingly effortless technique is especially evident when he plays the fretless banjo. Possessing a rich knowledge of other historic banjo styles from the Blue Ridge and Piedmont, Kirk is also a master of fingerpicked styles such as the one associated with famous North Carolina banjo player Charlie Poole. A steadfast proponent of western North Carolina mountain music, Kirk has long collected songs, tunes and stories from the elders in his region.

Fiddler, singer, banjoist and dancer (and autoharp and guitar player) Eddie Bond is from Fries, Virginia, a Grayson County hamlet of six hundred. Fries was built around a now-disappeared cotton mill near the headwaters of the New River that in the 1920s produced four of the high-flying string bands whose recordings and radio broadcasts helped invent country music.

Eddie plays in the forceful rhythmic Galax/Mt. Airy area dance style that captivated the nation, and the world, in the 1960s. He learned directly from legendary masters Tommy Jarrell, Fred Cockerham, and Kyle Creed, and other great musicians who did not record. As was de rigueur among the older fiddlers from whom he learned, Eddie is also a fine performer in the older clawhammer banjo style of the region. Bond’s family on both sides was packed with musicians. All four of his great-grandfathers were banjo players. His beloved Granny Widner, who raised him, sang, played guitar and was a flatfoot dancer. Eddie himself began performing at age three, dancing for quarters to the music of his great-uncle Leon Hill’s band. A dynamic performer, he brings flair and a sense of humor to the music that engages audiences and delights musicians. He is known for his powerful voice, and is often found singing and fiddling at the local Wednesday night jam session at the New River Café in Fries.