Henrico Police have released new information in the shooting investigation.

19-year-old Matthew O. Sykes of the 100 block of Edgewater Drive in Grandy, North Carolina has been arrested for aggravated malicious wounding, use of a firearm during the commission of a felony, and possession of a firearm by felon, according to authorities.

His mugshot is below. 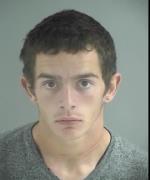 Henrico Police are investigating a shooting in the Near West End that occurred in a neighborhood near Skipwith Road and Interstate 64 this afternoon.

Just after noon on Thursday, Henrico officers responded to the 2700 block of Rudolph Road for reports of a shooting. Officers located an male victim suffering from a gunshot wound.

Detectives and Forensic Personnel remain on scene, and an investigation is ongoing.

Police aren’t releasing any information on a suspect at this time.