photos and words by Dean ChristesenView the photo slideshow In a large cement room on the first floor of a 9-story building that seemed to be normally uninhabited, Richmond bands performed today for what became known as RVA Band Day at the 10th annual Artomatic festival in Washington, D.C. It was a 6+ hour display […]

photos and words by Dean Christesen

In a large cement room on the first floor of a 9-story building that seemed to be normally uninhabited, Richmond bands performed today for what became known as RVA Band Day at the 10th annual Artomatic festival in Washington, D.C. It was a 6+ hour display of exceptional Richmond bands, and while people came and went, those who stayed for the entirety really were rewarded.

Os Magrelos went on a little late. Traffic on I95 was the reason, and would be the cause of problems later in the evening, but by 4:45 they had begun. Rooted in Brazilian music tradition, their Carnival energy exerted through modern rhythms had a Tropicalia vibe to it: exciting, different, and with clear influence but no limits. 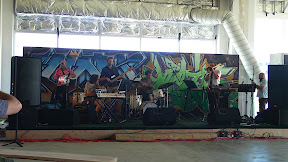 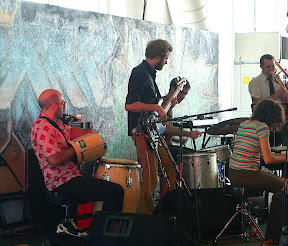 Their set was marred by poor sound, through no fault of theirs. Bass frequencies clouded up the spectrum of sound, and making out specific pitches was sometimes a challenge. This didn’t completely detract from the performance, but unfortunately the risk of playing first in a new space was evident.

Bio Ritmo is a fun, lively, and damn good salsa band. The muddiness issue of Os Magrelos’s sound was resolved, but it was replaced with sheer volume. Singer Rei Alvarez leads the band, and timbalero Giustino Riccio controls it much of the time from the back of the stage. 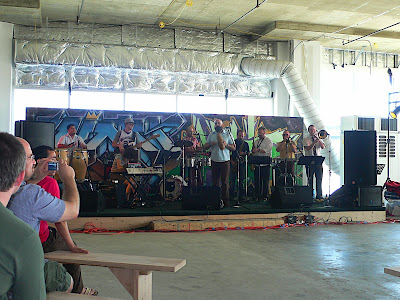 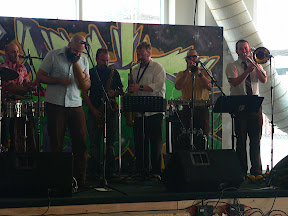 Despite the high ceilings, concrete floors, and problems that the previous bands experienced, Glows in the Dark sounded perfect. Trombonist Reggie Pace gave orders to the sound man to only mic horns and bass, which dramatically clarified the sound. Having just completed a short Northeastern tour, they had some contrasting performing experiences in the past couple days. Reggie Chapman, who traveled with the band recording each performance, mentioned the band’s ability to adapt extremely well to a rock band-style sound system at Piano’s in New York on Thursday. The same adaptability led them to a great group sound tonight. 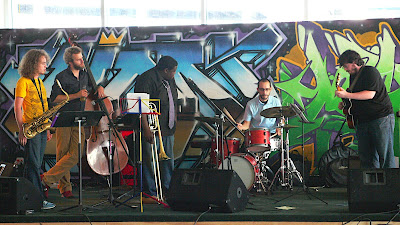 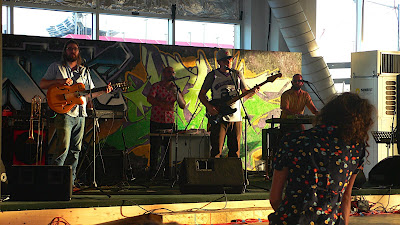 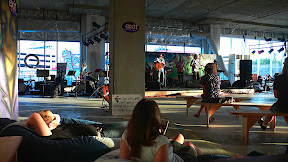 Fight the Big Bull and The Great White Jenkins shared the stage, Andy Jenkins jumping from percussion to guitar/vocals and back, Eddie Prendergast and Cameron Ralston swapping basses and percussion depending on the tune. The sum of the two bands has played weddings recently (there is no other explanation for their closer, “Great Balls of Fire”), and their compatibility is a no-brainer: FTBB, which shares almost all rhythm section members with TGWJ, becomes a horn section during the latter’s songs. For Big Bull material, Jenkins and Prendergast revert to the side of the stage to play shakers, cowbells, cymbals, and whistles.

The group took command of the room and its sonic tendencies. Like Glows in the Dark’s set, the music benefited from perfect clarity. Moments of overwhelming insanity rocked my brain at intense and loud moments, but all for good. 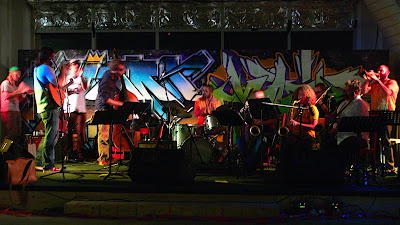 It’s hard to imagine an RVA Band Day without ILAD, but technical problems caused by the aforementioned traffic left no other choice. But the overall response of the evening seemed to be positive. The sound man for the day even noted his preference on Twitter: “A crew of musicians from Richmond VA came up to #artomatic & killed it the whole day amazing stuff!!” and “…amazing music coming to #artomatic best day of music on electric stage yet”. We think so too, but we’re a bit biased. 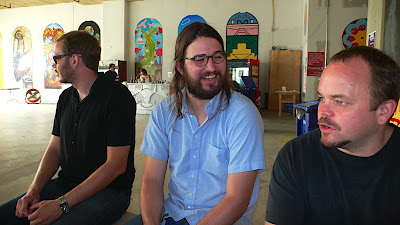 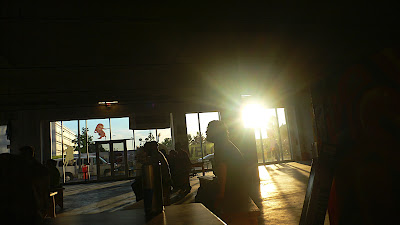 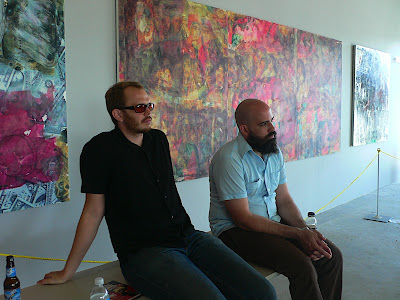 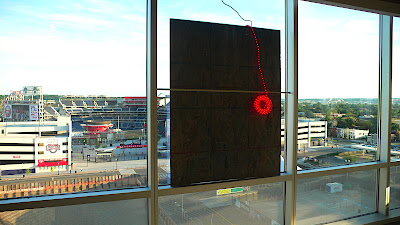 Thanks, Marlysse, for putting together RVA Band Day at Artomatic, and thanks to Artomatic for doing great things. Twitter is still the RVAjazz #1 method of instant micro-bloggification. I tweeted a bit during the events. Follow @RVAjazz.