by Dean Christesenphotos by Peter McElhinney Beautiful weather at the picturesque Chimborazo Park was the scene of the Richmond Marching Band’s first rehearsal today. From Richmond Marching Band’s First Rehearsal An ad hoc ensemble comprised of local musicians, VCU and high school students, and community members, the band’s mission of welcoming all to participate was […]

Beautiful weather at the picturesque Chimborazo Park was the scene of the Richmond Marching Band’s first rehearsal today.

An ad hoc ensemble comprised of local musicians, VCU and high school students, and community members, the band’s mission of welcoming all to participate was completely evident. Trombonist Reggie Pace and guitarist-turned-bass-drummer Matt White run the band, for the most part, but Pinson Chanselle’s direction of the drumline is not to be undermined. I was lucky enough to be one of the snare drummers and got to see the group turn into something great in this first rehearsal. 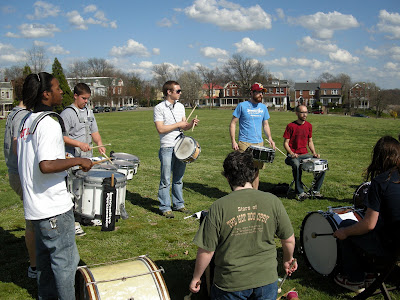 The drumline met before the rest of the band showed up. Snare drums included myself, Pinson, Scott Clark, and three high schoolers from Douglas Freeman HS. The bass drum line is made up of four non-drummers–Eddie Prendergast (bassist for Bio Ritmo), Cameron Ralston (bassist for Fight the Big Bull, Glows in the Dark, Ombak, etc.), Matt White (guitarist/leader of Fight the Big Bull), and Scott Burton (guitarist/leader of Glows in the Dark)–along with No BS! Brass drummer Lance Koehler. 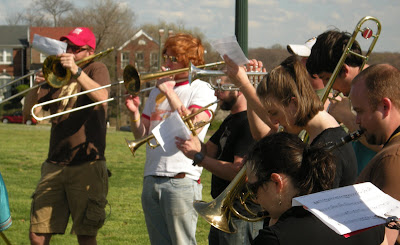 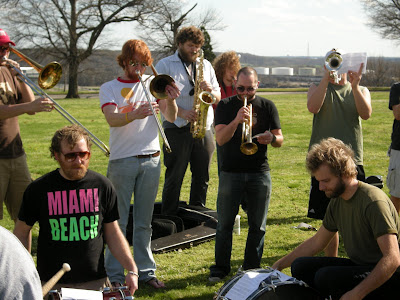 With the gradual arrival of the various brass and woodwind players, the sections combined and we put the pieces together. Our main focuses were our Fight Song, and Brian Jones’ Pinchback (from his Wurlitzer Trio’s album Drug Piano). Although the Fight Song begins with a quirky marching band flair and uptempo peppiness, it abruptly turns on its head into a fat groove, slow and immediately hip. Pinchback takes Randall Pharr’s bass from the album into the low brass section and Daniel Clarke’s dark Wurlitzer melody into the assortment of trombones, saxophones, and fluegelhorns. The bridge of the tune builds with huge chords while the percussion section grows with vigor, transitioning back into the main theme. 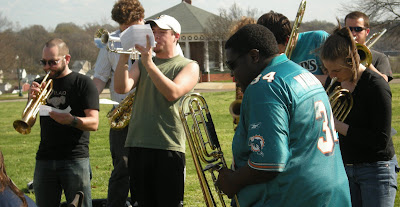 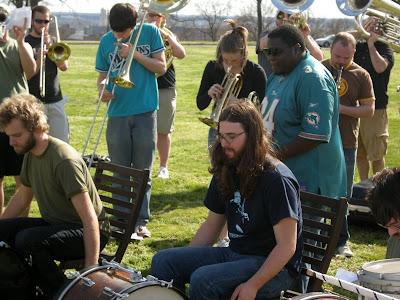 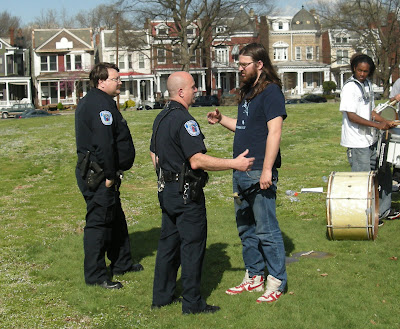 Two police officers casually strutted over to our rehearsal in the middle of the park. Like any appropriately-sized marching band, we were very loud. We were apparently too loud for the residents living next to the park. To paraphrase one of the cops, “They won’t call us about people doing drugs in the park, but they’ll call about things like this.” Permits to rehearse in Monroe Park should prevent that from happening at future rehearsals. The Monument Avenue 10K yesterday kept us from rehearsing there today, so Chimborazo was the temporary park to rehearse in. The cops were considerate enough to give us 15 minutes to wrap up our rehearsal.

The band is rehearsing for its first anticipated march on July 4th, although the locale has not yet been determined. All are welcome to join the brass or woodwind sections. Rehearsals are the last Sunday of each month, 3pm at Monroe Park. Everyone who is interested are encouraged to join the Facebook group.

I updated Twitter with photos and certain news about cops during the rehearsal. I’ll continue to utilize that social networking site more and more as I figure out ways to do it, so be sure to follow @RVAjazz.