Also take a look at car break-ins over the past six months. Add another one to the list. I came into work this morning with the following email in my inbox.

We had both of our cars broken into last night. Items taken. We are on 5000 block Evelyn Byrd rd. We are filing a police report.

It appears that car thieves are targeting our area currently over the past couple days rash of reports have shown up on the Westover Hills Neighborhood Association Facebook. Usually for everyone that is posted there are a bunch that aren’t.

RAIDS Online  can shows all crime in the area. The screenshot above is of car break-ins since July 30th. As you can see it’s reporting four car break-ins but not showing the one on Riverside Drive.

Below shows the number of car break-ins in the area over the past six months.

There is another big batch of break-ins in Manchester during that same time period. 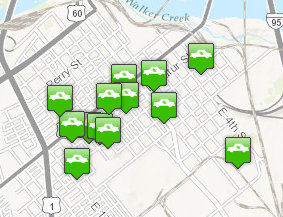 The two take aways, lock up your car and the RAIDS Online is a handy tool to check out what’s going on crime wise in the area.