Raising Richmond: The sun and the rain and the apple seeds (and also mud)

My son and I have a thing about picking fruits and vegetables; the act of plucking something from a vine and dropping it in a bucket is soothing to the quiet, focused nature we share. Now that Autumn is upon us, it only made sense to carry our favorite pastime over into the new season. That’s right! It was apple picking time, y’all!

Back in May or June of this year, I discovered that picking fruits and vegetables is the most calming experience on God’s green Earth–at least for me and my almost-three-year-old son, JR. The simple act of plucking something from a vine and dropping it in a bucket is soothing to the quiet, focused nature we share.

(Ok, that was vomit-inducing…but not inaccurate.)

As Autumn is upon us (and since realizing that JR is probably capable of creating long-term memories now, I’ve become obsessed with exposing him to timely activities! fun outings! PRECIOUS MOMENTS, PEOPLE!), it only made sense to carry our love of harvesting into this new season.

I suppose we could have left it at a sweet-and-easy trip to pick pumpkins, but I decided to take the autumnal factor up a notch with a trip to Central Virginia’s apple-picking Mecca: Carter Mountain Orchard.

Carter Mountain is located in Charlottesville, a little over an hour outside of Richmond, so it’s likely that you will need to at least make a morning of it, if not a whole day. JR and I arrived at about 10:30 on a Friday morning — a bit later than I would’ve liked, but rain showers slowed us down a bit. And luckily, by the time we turned in at the orchard entrance, the sun was shining and it looked like our apple-picking wouldn’t require ponchos after all.

Now when they say it’s a mountain, they are NOT lying. After turning in at the Carter Mountain sign, you will need to make your way up an actual mountain on a curvy, narrow, two-lane road. (Keep in mind that we were fresh off a heavy rain at the time of our visit, so the road also had a nice coating of mud). My advice is just to take it slow and enjoy the sights; Blue Ridge Mountain foliage is hard to beat, anyway. And the view once you reach the top of the mountain? Good gravy, my city-dwelling eyes could hardly handle it. JR was amazed by it as well, throwing his arms out and hollering “It’s so BIG!” 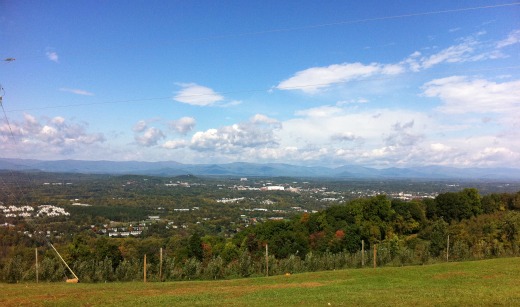 Thanks to Carter Mountain’s website, we knew what we needed to do once we arrived: head over to the barn and ask for someone to get us started. We were there at the same time as several field trip groups so it was pretty packed (I imagine it would have been even crazier had it been the weekend), but we didn’t have to wait too long to flag down a Carter Mountain employee to get our map, bags, and a little advice on where to start — after all, we were apple-picking novices. She suggested we head over to the Fuji apple section of the orchard because they’re currently the sweetest.

Carter Mountain provides apple pickers for those looking to go after the high ones, but we decided to keep things low key. The whole point of this visit was to have a little outdoor fun, not to stock up for the winter. Good thing, too, because schlepping JR through those first few, mud-soaked rows was hard enough without a giant stick in my hand.

Thanks to the mud and our lack of appropriate footwear (boots, just wear boots no matter what), it was slow-goings during the actual picking part of the morning. But despite a few tears (JR’s) and some messy bottoms (both of us) due to some particularly muddy falls, it was hard to not to find joy in the act of selecting an apple, picking it off the tree, and sharing it with my kid right there in the orchard. Plus, it’s exciting to watch him grow in his understanding that food doesn’t just appear in the grocery store. 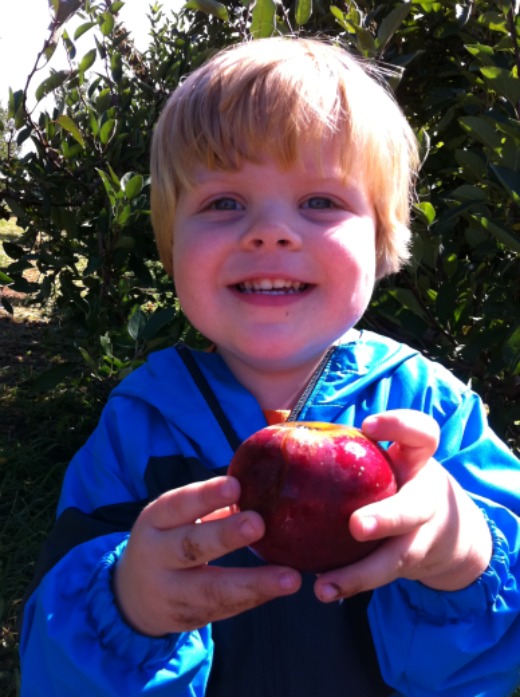 A boy and his apple. And his dirty, dirty little hands.

By the time we were finished (read: were totally exhausted), we probably had about 10 apples in our bag, but JR seemed thrilled with what we had accomplished. Plus, Carter Mountain had plenty for us to do once we left the orchard section of the property. They offer hayrides around the property, but those were slammed with field trippers the day we visited, so JR and I took our mud-caked selves for a little tour around their pumpkin patch (around $.59 per pound) and spent time at the educational stations they’ve got set up just outside of the barn. 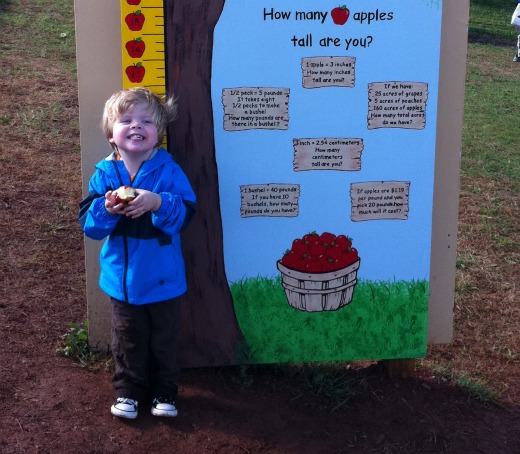 As nap time was quickly approaching, I woefully decided to skip Carter Mountain’s famous home-made apple cider donuts (“Next year” I keep telling myself) and headed into the barn to pay for our pickings. Carter Mountain does take credit cards (VISA and MasterCard only), but there’s a $7 minimum charge. With their apples costing $1.19 per pound and our toddler-sized spoils only weighing in at only around five pounds, my cash-free self was left to snag a few additional items to be able to use plastic. Grandma’s Country Store was happy to oblige, and I SOMEHOW convinced myself to throw some festive decorations in with the lot. (I have a thing about gourds. It’s called love.)

On our way back to the car, we ran into a friend of mine from our neighborhood with her husband and two kids in tow. I think the physical stress of the morning was showing on my face because she asked gently, “So. How did it go?”

“It went well!” I said hurriedly, the pitch of my voice rising as the sentence progressed. “It’s just good that you’ve got some help with you. We didn’t end up picking a lot.”

“Well that’s ok,” she told me. “At this age, it’s all about exposure. And as long as he had fun, that’s all you can really ask for, right?”

She was exactly right. On the way back down the mountain, I looked in the rear view mirror and saw JR conked out in his car seat, mouth hanging open, with an apple lovingly cradled in the crook of his arm.

Yeah. I’d say we did good. And we’ll definitely be back next year.

With boots, of course.

Carter Mountain Orchard is open daily from 9am to 6pm through November 5th and from 9am to 5pm November 6th through November 27th (closed Thanksgiving Day). In addition to apple picking, you can also check out Aunt Sarah’s Bakery and Mountain Grill (that’s where you’ll find those donuts), Grandma’s Country Store, and their on-site Wine Shop with daily tastings of wine made from grapes grown right on the property.

Valerie Catrow is the former editor of RVANews who now spends her days raising her son, reading young adult fiction, and watching really bad television. When she’s not contributing to our parenting column or ranting and raving on her personal blog, Made in Richmond, you can probably find her abusing the caps lock key on Twitter.