A Pizza Hut will open in the Twin Hickory Town Center on Nuckols Road later this year. An outparcel building in a Glen Allen shopping center that’s had a tough time retaining mainly local tenants will soon see a chain take a chance on it.

Pizza Hut plans to open a location in the spot formerly occupied by Bruster’s Real Ice Cream at 11385 Nuckols Road. Crews are already building out the interior, with plans to open later this year. 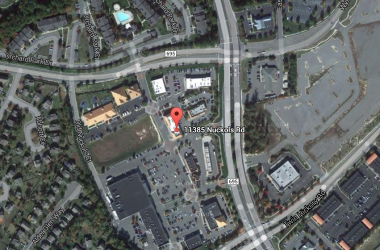 The building, a late addition to the Twin Hickory Town Center shopping center, was originally built to house a Bruster’s Real Ice Cream location and a Bottoms Up Pizza–the Shockoe Bottom restaurant’s first attempt at franchising.

That’s where things get interesting. Tenants have since come and gone like the wind.

Bottoms Up closed not long after opening, after which local Mexican chain Casa Grande took over the space.

With Casa failing to bring in the crowds, it too closed.

BT’s Deli, a family-owned deli spot, also gave the space a try. Right around the same time, Bruster’s pulled out of the adjoining space.

Parking has always been an issue in the neighborhood shopping center, which adjoins the entrance to the Twin Hickory planned development, but the remainder of the shopping center is almost completely leased.

Will Pizza Hut survive in the building? Only time will tell.