Lois chokes on a gumdrop

The staff art show that hung during the Biograph Theatre’s second anniversary party on Feb. 11, 1974 included various works by several then-current employees and some former staff members, too. At that time I managed the repertory cinema and most of those who worked there were artists of one stripe or another, too. The piece above, […] 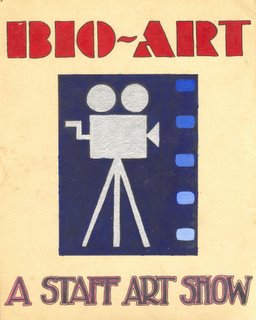 The staff art show that hung during the Biograph Theatre’s second anniversary party on Feb. 11, 1974 included various works by several then-current employees and some former staff members, too. At that time I managed the repertory cinema and most of those who worked there were artists of one stripe or another, too.

The piece above, by yours truly, hung in the space of the lobby’s gallery that usually featured the artists’ statements. I also had a couple of pieces in the show itself. One of them sold and that was fun. Another was stolen. That was a bummer and a weird kind of violation.

Although most of the art shows that hung in the gallery displayed the work of local/VCU-connected artists, that was not always the case. In the first three or four years, when the walls of the lobby regularly featured shows that changed every couple of months, or so, occasionally art by then-renown artists, usually printmakers, was on display. Among them were Ernest Trova, Robert Indiana and sculptor George Segal.

In the summer of 1978, the same time as the Rocky Horror Picture Show began its five-year run at midnight, we had a show up that was memorable for an odd reason. It was a group of silkscreen prints and paintings by Barry Fitzgerald, who drove a cab and sometimes played keyboard in a popular local band, Single Bullet Theory.

Fitzgerald’s work had a pop art, reaction-to-advertising look. His droll sense of humor showed in a series of a half-dozen similar paintings. Each had a large line drawing in black against a background of a flat field of a single color. The renderings were done in the sparse style of a government pamphlet. Each had the same girl, Lois, coughing as she faced the viewer. Each had a caption written across the bottom of the colored panel which explained that Lois was choking on something. I think Barry was asking about $100 apiece for them.

Let’s say the first one was blue. It might have said, “Lois chokes on a gumdrop.” I think one of them did say that. The next one could have been yellow, it would have said something like, “Lois chokes on a pocket watch,” and so forth. The only other caption I remember had Lois choking on an Egg McMuffin; that one I’m sure of.

One day a man claiming to be a lawyer called me to say I had to take the Egg McMuffin piece down, pronto. He told me he was a local guy, who’d been talking that day with an attorney for the McDonalds fast food empire. He asserted that if I didn’t take it down McDonalds was going to lay some legal action on the artist, the Biograph and me.