Coda to open this month

Coda plans to open next to The National this month. If you have been to The National lately, you noticed that Gibson’s Grill closed earlier this summer. Good news – a new restaurant, Coda, plans to open in the space this month. 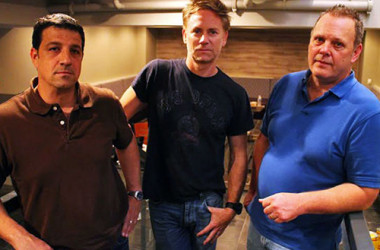 From left: Daniel Delgado, David Peterson and Doug Brown will open Coda next to The National in September. Photo by Michael Thompson.

Coda will serve American food with a changing menu that corresponds to the shows playing next door. The new restaurant will have a bar on the upper level with a dining room and a speakeasy on the lower level. David Peterson, Daniel Delgado, and Doug Brown plan to open Coda by the September 17 Foo Fighters show at The National. Read more about Coda on Richmond BizSense.