Another bike shop option in the Fan with Lucky’s

Get on that bicycle and ride like a beautiful rainbow unicorn. Lucky’s Bicycles at 708 N Meadow Street held their Grand Opening about two weeks ago and they’re so new I haven’t had a chance to check them out. It’s nice to have another option for all the two wheeled transporters plus RAINBOW UNICORNS. 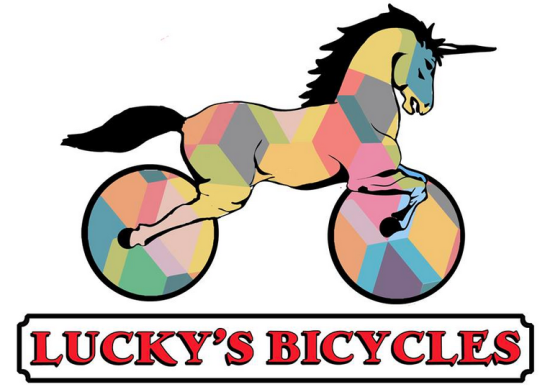 Lucky’s has limited hours, Wednesday through Saturday 10:00 AM to 6:00 PM and promise low cost repairs, a large selection of used bicycles, and custom new bikes.

Cecil and Versluys first launched Lucky’s in January 2013 at 6995 Cold Harbor Road in Mechanicsville. The former VCU students signed a three-year lease for the space in the Fan.

“We got a really good deal here,” Versluys said of the Fan property. “We live in Richmond. It’s easier for us to commute, and there are more people who ride bikes.”

At 850-square-feet, the new location is twice the size of their previous space. The North Meadow Street site was previously home to a floral shop.