Welcome to the neighborhood. More and more businesses are moving into the area and filling vacant storefronts.

In late 2014, A for Adventure, an advertising and design firm, moved into the former home of Big Secret at 308 N. Adams Street. When walking down Adams Street, you can’t miss the shiny gold shooting star on the front windows or the large United sign illuminated at night. Created by local designer, Jonathan Goldberg, in 2012, the company has a strong focus on content and brand identity. Among their many clients, A for Adventure has worked with the RVA Street Art Festival, Shockoe Denim, and Fern & Roby on identity, print, and digital projects.

When speaking with Richmond BizSense about the neighborhood, Goldberg stated.,

“It feels the most like Brooklyn to me…It’s a goal of mine to create a meeting space for the creative community in Richmond.”

More recently, VCU grad and former co-owner of Addison Handmade & Vintage, Ashley Carruthers opened Rosewood Clothing Co. at 16 W. Broad Street. At Rosewood, you will be able to find curated vintage and handmade goods along with bath and beauty products. 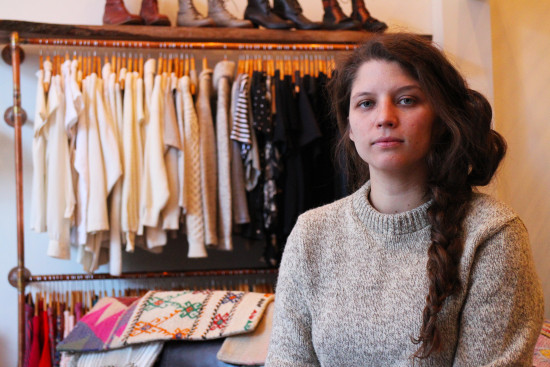 So, what about Jackson Ward is bringing new businesses to our neighborhood?

Carruthers said she was inspired by the presence of nearby retailers Blue Bones, a vintage shop that shares a space with record store Steady Sounds, and Verdalina, both on the 300 block of West Broad Street.

“They’re the pioneers of this retail movement,” Carruthers said. “This used to be a fashion district – the SoHo of the South – and I’m excited to be part of it.”

There are other shops in the surrounding few blocks that seem to be part of that apparent movement. Skate shop Utmost Co. opened recently at 115 W. Broad St. and Circle Thrift & Arts Space is now open at 7 W. Broad St.

Photo of Jonathan Goldberg of A for Adventure by Frederick Turko/RichmondBizsense. Image of Ashley Carruthers of Rosewood Clothing Co by Michael Thompson/Richmond BizSense.