Sometimes, it seems as if Richmond is so filled with art that it might burst. VCU, surely, is a big part of that–the university attracts thousands each year to its elite arts program, and if the kids like Richmond enough, they’ll stay. But that also means art faculty and art lovers find the city compelling, and the result is a higher-than-average concentration of both artists and art-appreciators. The result of THAT is a lot of different kinds of art–sculpture, painting, drawing, dramatic arts, fashion, music, graphic design, even tattoo art.

For Grace Huddleston and Rachel Ludwig, the magic is in those little empty spaces in between all of those words above. Mixtures of visual, sonic, static, and dynamic is their bag–and when the two met in 2010, they found that they weren’t alone.

Now the two are no longer students and work day jobs just like the rest of us. And in their spare time, they create art, just like many artists. But what the pair does that many of the rest of us don’t is help other people like them–people who feel like they reside on the fringe of art–find an audience.

Their organization, Community Room, has, to date, provided two separate such platforms. Both evenings were at Gallery5, both involved all sorts of artists, and both were well-attended.

But having a week to themselves at 1708 Gallery is a whole different bunch of bananas! Says Rachel Ludwig, “Those nights are really fast-paced–someone does a thing, and then someone does another thing. But now we have a whole week to let performers set up…I think that [having more space and time] allow people to be a little more ambitious with their setup and the technology they require. The gallery is just so big and open–I think it’s really encouraged people.”

For example, a performing arts duo named Cecilia (consisting of Brandon Hurtado and Dana Ollestad) had Monday to set up before their “movement, sound, and live field samples collaboration” on Tuesday evening. Then they’ve got a couple of hours to themselves–just them and the audience. 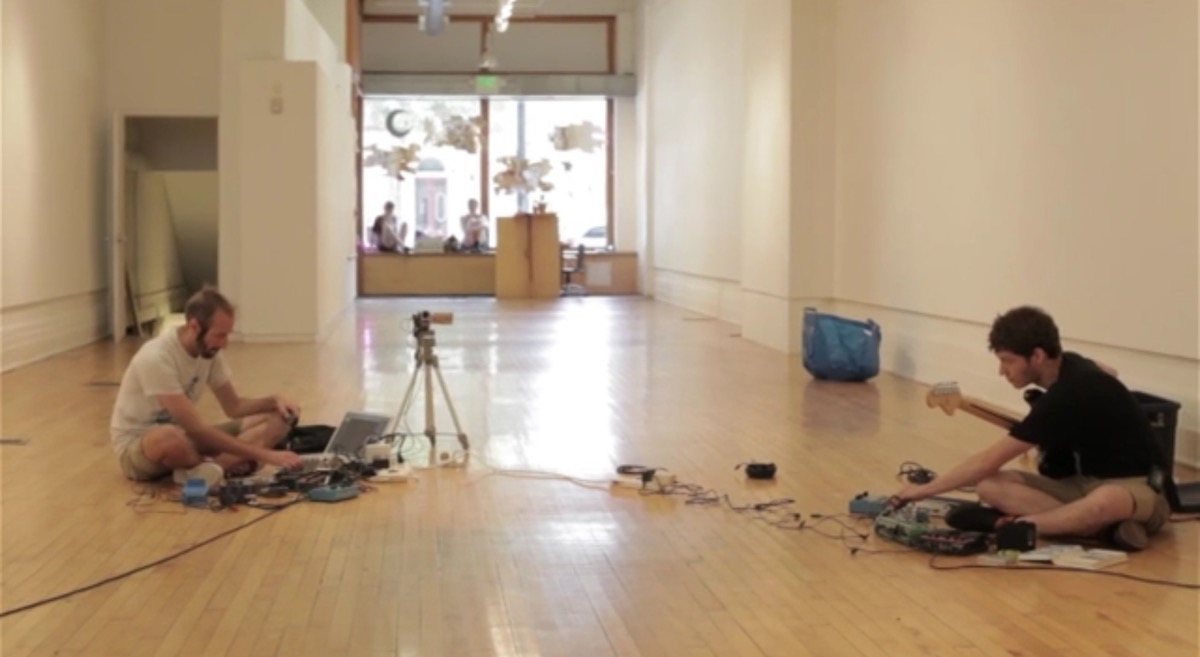 Ludwig thinks that connection to the audience is something that more static artwork just can’t capture, both for the artist and the viewer. “There’s something so visceral and riveting about the artist being in the room with you, demanding your attention–that has such a cool quality to it,” she says. “It’s more than just a band playing a song, where people just stand and listen. The artist could be walking around you, they could be anywhere in the space, there’s this feeling of that you don’t know what’s going to happen.”

She’s clearly exhilarated by the prospect, and has herself been exploring the intersection of her musical and visual artistic talents. Ludwig will be performing on Saturday night with a project she’s called Gemtone. “It’s kind of a weird, ambient, noise, pop thing,” she says dismissively, preferring instead to talk about Huddleston’s project (she’ll be performing on Saturday with “a lot of interesting props and sounds and video” and the other performers (“Cecilia has actual crickets chirping in here. Like real animals. In a box.”)

Ludwig hopes that the crickets will stay–in fact, she’s angling to have every performer leave something of their performance behind. By the weekend, the gallery should be filled with interesting stuff. The other acts include Malcolm Peacock, who’s trying to brain the world’s longest braid, Bckwards Haus, a hip-hop collective who will be building a tent to perform in, and lots more..

This week will be one of the more dynamic in 10 x 10 recent history, with different performances each night using art in ways you may not have ever seen before.

Will Community Room have a difficult transition to the smaller, more contained events?

“I don’t know what we’re going to do next!” says Ludwig, who sounds like she’s been asking herself that same question. “It’s been fun, but it’s also been a lot of work, so we’ll see!”