You think you have problems: “Cat On A Hot Tin Roof” at Firehouse Theater Project

A famous play by Tennessee Williams is now playing in Richmond. Who’s up for a little violence, homophobia, and adultery!?! Our review of the latest production of a famous playwright’s classic.

When people look at the crazy world we live in, they sometimes talk about the “good old days.” There’s a longing to exist in a simpler time, such as the 1950s. I’ve had those daydreams and have definitely wanted to exist in that era. Books, television, and movies have all contributed to the nostalgia of the 1950s. But let me say, if Cat On A Hot Tin Roof is any indication, the fifties were just as insane as today.

Tennessee Williams masterfully crafts the most dysfunctional of families in Cat On A Hot Tin Roof, a play that takes place entirely in the span of one balmy summer night on a plantation in Mississippi. Throughout three acts, the immense amount of issues plaguing the troubled family emerge and, wow, there’s a lot of them: violence, homophobia, alcoholism, aggression, depression, deceitfulness, greed, and adultery just to name a few. As each person’s faults are publicly exposed, no one in the family walks away unscathed. The drama is not without its moments of humor and wit, however, a fragile thread that ties together the divided house. 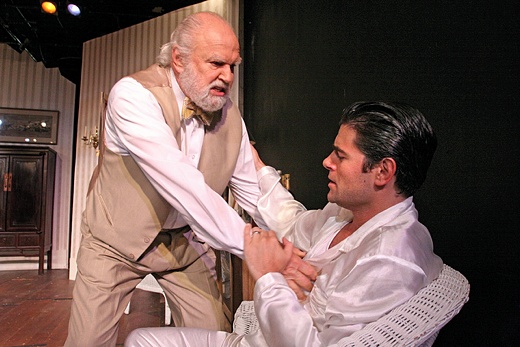 As part of the Tennessee William’s Centennial Celebration, the Firehouse Theater Project’s production of Cat On A Hot Tin Roof seems to be just as raw as Tennessee William’s intended it to be. Sitting in the confines of such a small theater, the audience can’t help but be thrown into the thick of it all. Every angry yell and mournful cry reverberates throughout the room, leaving you emotionally exhausted by the end.

The turmoil is delicately executed by a small cast of characters who spend the show not only struggling with each other, but also with their own wants and fears. Maggie (Laine Satterfield) and Brick (Adrian Rieder) are the couple at the center of it all, grappling with a crumbling marriage and haunted by the past. The majority of the first act surrounds the two of them, with Satterfield impressively delivering a startlingly long monologue about her predicament as the “cat” as Brick downs highball after highball after highball. Brick’s drinking problem is in fact the only sure thing throughout the show– most everything else the audience discovers in the beginning is not what it seems by the end.

Check out the Firehouse Theater Project’s production of Cat On A Hot Tin Roof while you can. Once you get over the emotional exhaustion, you’ll inevitably feel better about your own life. And if you don’t, well, maybe you should become a playwright and give old Tennessee a run for his money.

Cat On A Hot Tin Roof runs from September 15 – October 8 at the Firehouse Theater Project, for tickets: firehousetheatre.org