After almost five years of planning and hard work, the Virginia Museum of Fine Arts is set to open the new James W. and Frances G. McGlothlin Wing on the first of May. We (and a very large handful of others) got to take a peek at the new digs this morning…and ladies and gentlemen, it looks fantastic.

After almost five years of planning and hard work, the Virginia Museum of Fine Arts is set to open the new James W. and Frances G. McGlothlin Wing on the first of May. We (and a very large handful of others) got to take a peek at the new digs this morning…and ladies and gentlemen, it looks fantastic. 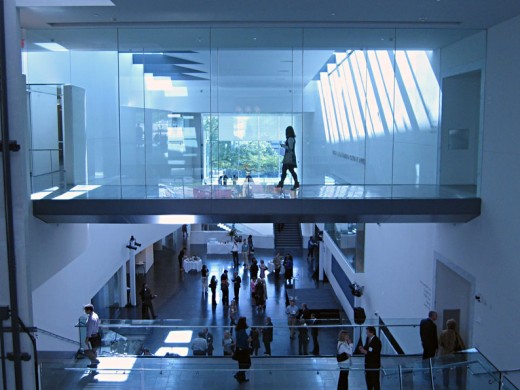 With just a little over a week to go until the big day, finishing touches are still being put on the new wing. While folks from the media mingled with members of the VMFA staff and board of trustees in the new wing’s Cochrane Atrium, employees scrambled (not frantically, but purposefully) to fill display cases in the gift shop. Meanwhile, just outside, landscapers were busy making some final additions to the grounds surrounding the new wing. Save these few tweaks, things look to be running smoothly and (most importantly) on schedule.

VMFA Director Alex Nyerges started the festivities off with a few words of welcome, filling us in on what a meticulous process this was and what visitors can expect now that the renovation is complete. Gesturing to the entire wing, Nyerges stated that the new space was “nothing short of spectacular.”

Nyerges’s enthusiasm was contagious, as evidenced by the notable gasps at his mention of the Tiffany: Color and Light exhibition scheduled to come to the VMFA on May 29 (the first major exhibition to be shown after the grand opening of the wing) and nods of agreement as he sang the praises of the museum’s Art Nouveau collection, considered one of the best in the world outside of Paris.

Rick Mather, founder of the London-based Rick Mather Architects which headed up the addition in partnership with Richmond’s SMBW Architects, was set to take the floor after Nyerges finished up, but his plane was held up by a certain volcano we’ve all been hearing about, so his associate Peter Culley stepped up to fill us in on the actual design process. And he seemed proud to do so stating, “If this facility were in London or New York, it would be a huge, huge deal.”

Culley explained that the biggest challenge with this project was coherency; the VMFA’s buildings, the campus, and the city didn’t really “communicate,” as he put it. Mather aimed to fix that by first putting together diagrams devoted to analyzing the relationship between those three entities. He also wanted the design of the new space to avoid what some call “museum fatigue” — you know, that feeling you get towards the end of your visit where you don’t really know where else to go and it seems like the building never ends or just keeps circling back on itself.

To address these concerns, Mather and his associates made visibility a priority. Now you can easily see where you’ve been and where you’re going, and always understand where you are within the confines of the building. The Cochrane Atrium features five open “bridges” that connect the new space to two existing wings of the museum. The new wing also features a 40-foot-high glass wall looking out on to North Boulevard, visually connecting the museum to the city. As Culley put it, “It says to the Richmond, ‘Please come inside.'”

And come inside you should! In addition to their permanent exhibits, the VMFA has got some amazing stuff lined up for the grand opening alone, including the much-anticipated German Expressionist Art: Selections from the Fischer Collection and Matisse, Picaso, and Modern Art in Paris shows. They’ve also added the E. Clairborne and Lora Robins Sculpture Garden, and expanded the Art Education Center to include two art studios for the kiddies and additional exhibition space. And for all you foodies out there, the VMFA now houses Amuse, a new restaurant space overlooking the sculpture garden that will feature a menu packed with fresh, local ingredients. 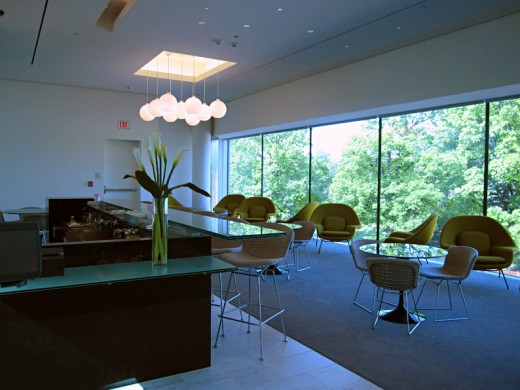 So, it’s time to get excited, Richmond. After all that planning and all that time (and all that construction, gee whiz), it’s almost time to get our collective art on in a serious way.

The Virginia Museum of Fine Arts is open every day from 10am to 5pm, with extended gallery hours until 9pm on Thursday evenings. Beginning July 1, the museum will also be open on Friday evenings until 9pm. General admission is always free, special exhibits cost extra.