It’s the hottest ticket in town each May and sells out in a few hours. Each year the VCU Department of Fashion Design and Merchandising holds a highly anticipated sold out event that features the top 100 garments of upperclassmen student designs, chosen by a panel of esteemed fashion industry critics.

Fashion is a term usually used in a positive sense, as a synonym for glamour, beauty and style, but quite often applies to a personal mode of expression. Fashion is something we deal with everyday. Even people who say they don’t care what they wear, well they are lying. They choose clothes every morning that say a lot about them and how they feel that day.

Why is fashion important?

Fashion is big business. More people are involved in buying, selling, and production of clothing than any other business in the world. Everyday, millions of workers design, sew, glue, dye, and transport clothing to stores. Ads on buses, billboards, and magazines give us ideas about what to wear, consciously, or subconsciously.

What should you know about VCU and fashion?

If you didn’t know by now, VCU is tops among public art schools in America. And, yes, that includes their amazing Department of Fashion Design and Merchandising. They currently have over 300 students enrolled in two educational tracks and have a world renowned Advisory Board of industry professionals for their students to works with.

What to know about the Annual Juried Fashion Show?

It’s the hottest ticket in town each May and sells out in a few hours. Each year the VCU Department of Fashion Design and Merchandising holds a highly anticipated sold out event that features the top 100 garments of upperclassmen student designs, chosen by a panel of esteemed fashion industry critics. Judges this year included representatives from Wrangler Jeans, Isaac Mizrahi, Fashion Group International, Cotton Incorporated, and Macy’s among others.

This was the second year in a row that they walked the runway in the Virginia Museum of Fine Art’s Louise B. and J. Harwood Cochrane Atrium. This year’s theme was Heritage which they described as a return to classicism and regality. I think a great example of this is the Royal Wedding we all just witnessed. Old traditions were kept in place with the ceremony, but the mold was broken with edgier Alexander McQueen gowns worn by Kate Middleton and her bridesmaids. You could see in much of the student work a nod to the past with a twist on what is current and comfortable.

The evening was broken into nine segments, each group produced by students in the Advanced Show Production class.

They were: Tribunal Domination; Menswear; Junior Sportswear; Minimalist Chic; Cut-N-Sew Knits; Cocktail; New Directions in Sportswear; Eveningwear; and Arts of Fashion. A few of the standouts were: 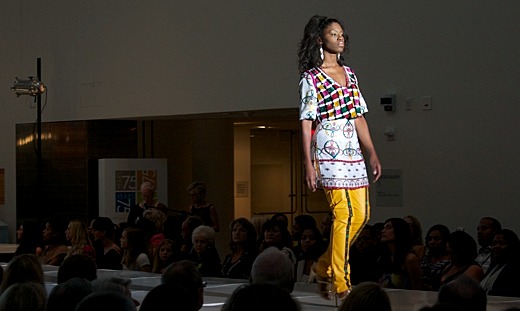 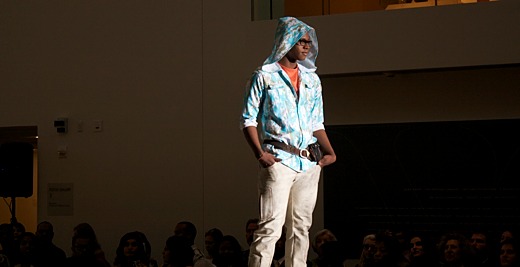 Menswear: A nod to 19th century military jackets, lots of denim, vests and epaulets. There was one denim trench in particular with cream detail. The tailoring was impeccable.

Minimalist Chic: This was by far my favorite, maybe because the inspiration was 1970’s icon Halston? Every look had a jacket or cape to match in cashmere. I wanted to leap over the stage and touch everything! Underneath were unstructured dresses, a lot of draping, which is my favorite and is very timely right now. I would make a home for everything in this collection in my closet. 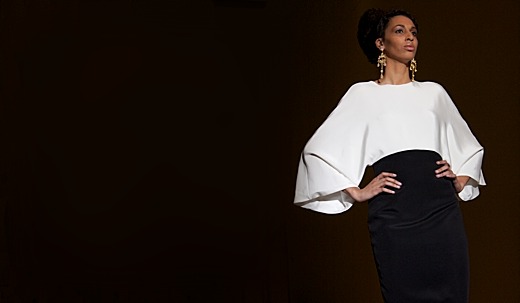 Evening Wear: Professor Henry Swartz asked his students to “Make a Statement” and that was the only prerequisite he gave them. Gowns ranged from less formal to structured evening wear. Two standouts were a champagne colored strapless gown with chiffon detail trailing the bottom of the dress. The second a 1970s style black and white straight gown with keyhole back and long train. Both were showstoppers of the evening.

Critics Awards of the Evening

We had originally reported that the segments were directed by professors — which was a bit misleading. To clarify: each segment was produced by students in the Advanced Show Production class.

Courtney Skunda is a Marketing and Public Relations Manager in Richmond, VA. She loves Barneys, Bergdorf Goodman, and Neiman Marcus in that exact order. You can read about her fashion obsessions on her blog, Cobblestone Couture.