Ever seen a thing with 300 million other things on it? Dustin Cable, a researcher and statistician over at the Weldon Cooper Center for Public Service at UVA, recently released a colorful map of the United States based on the 2010 census data.

But these are no arbitrarily chosen and positioned colors. In this case, the map contains 308,745,538 dots (purportedly; I didn’t count ’em), each of which represents the ethnicity and relative location–accurate to roughly the size of a city block–of every single person in the country. Dang! 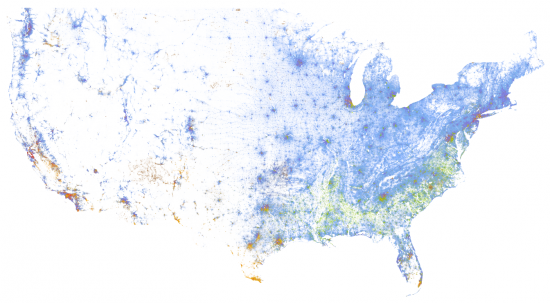 This map is an American snapshot; it provides an accessible visualization of geographic distribution, population density, and racial diversity of the American people in every neighborhood in the entire country. The map displays 308,745,538 dots, one for each person residing in the United States at the location they were counted during the 2010 Census. Each dot is color-coded by the individual’s race and ethnicity. The map is presented in both black and white and full color versions. In the color version, each dot is color-coded by race.

Quite the undertaking–the two maps comprise a total of 1.2 million image tiles!–and the results are stunning. Take a look for yourself by viewing the full map. Dive in and explore. Note how neighborhoods and cities conform to geographical and man-made features alike. It turns out that beautiful data visualization is one of the better things about the Internet.1