Total Recall: I recall the first one fondly!

You’d think moviegoers would get bored of watered down versions of movies they’ve already seen–but no! The onslaught of sequels and remakes continues with Total Recall. Question: have we run out of ideas for new movies?

Preceding Total Recall, 100% of the previews were of either remakes/sequels or Quentin Tarantino1 movies. They’re remaking Red Dawn2 for Pete’s sake! Has it always been this way? I don’t remember seeing any sequels for Bringing Up Baby (Look Who’s Bringing Up Baby Now!), The Maltese Falcon (The Maltese Falcon Flies Again: A Fat Man’s Tail), or Citizen Kane (Citizen Kane 2: Rosebuddies). But here we are, neck deep in rehashes of movies that maybe weren’t all that great the first time around. 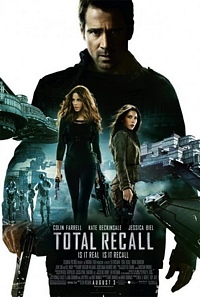 This particular Total Recall is a remake of the 1990 film starring Arnold Schwarzenegger and has enough plot tweaks to make it feel newish. Set in 2084 after a world-wide chemical war has left the majority of earth uninhabitable, the film follows Douglas Quaid (Colin Farrell) a humble yet handsomely ripped construction worker. Quaid lives in The Colony (present day Australia) and commutes each day to the United Federation of Britain (present day Britain) via an elevator through the center of the earth–which, honestly, talk about government spending! Dubbed The Fall, the elevator brings tens of thousands of blue collar workers through the center of the earth to work depressing factory jobs for the white-collar British aristocracy.3

Quaid lives a boringly normal construction worker’s life, married to a beautiful EMT named Lori (Kate Beckinsale, Those Underworld Movies). His nights are plagued by strange dreams of Schwarzenegger-like action sequences starring himself and a strange woman (Jessica Biel, 7th Heaven4). Because life in The Colony is pretty shitty and because Quaid thinks he might be going just a little bit crazy, he decides to visit Rekall, a company specializing in implanting memories. For a fee, Rekall will implant all the pleasant memories not afforded by your current life, letting you “remember” your time as a rockstar, orgymaster, or secret agent. However, if you already have any of these memories the procedure can go horribly wrong, causing your mind to irreparably conflate real and fake memories. Quaid chooses the secret agent package and…the procedure goes horribly wrong!

Philip K. Dick wrote the original story, We Can Remember It for You Wholesale, on which the Total Recall universe is based. This newest incarnation heavily borrows visuals from Blade Runner, another Philip K. Dick story; Minority Report5; and Star Wars. The Colony looks like it was lifted straight out of Blade Runner’s Los Angeles, and works as a great setting for Beckinsale to chase Farrell around. The United Federation of Britain is less detailed but sports a sweet hovercar highway (vehicles hover on and hang below the road) for all of your action-movie-car-chase needs. And The Fall is really the visual centerpiece–it’s even kind of based on quasi realish science!

The characters aren’t especially deep, which is OK I guess. Beckinsale’s character had potential but fell short, and Biel plays the typical helpless female in need of rescuing. At some point Beckinsale’s pursuit of Farrell, which starts out terrifyingly, becomes a snoozeville catfight between her and Biel. Farrell does a decent enough job playing an emotional, confused dude but can’t hold a candle to Schwarzenegger’s performance. That’s because Quaid is supposed to be a construction worker looking for a more interesting life that emerges from the Rekall procedure completely at a loss and out of his depth! It works better when he’s kind of dumb (no offense, former Governor!).

If you’ve seen the original Total Recall you’re probably going in looking for three things (warning, spoilers from 1990 ahead):

So it’s a mixed bag for those who wish to relive old Total Recall memories. Honestly, I’d just Netflix the original or have the memories of Arnold pulling a golf ball out of his nose artificially implanted.

You were born sometime between 1970 and 1980, or you have a thing for three-boobed mutant women. Also, if you’re a sucker for good scenery.

Maybe after feeling deep emotions while watching Katniss in The Hunger Games, you’ll no longer put up with science fiction movies hastily throwing together two-dimensional female characters. Or maybe you’d just like to see an original storyline for once?