Last week, we interviewed Toby Whitaker about his big band, his departure from Richmond and we dubbed him the newest judge for our DROP THE NEEDLE series. Wednesday night, his big band debuted to a packed house at Balliceaux.

After an incredible and rare set by Jason Scott’s Small Town, 15 musicians crowded onto the undersized stage tucked in the back corner of the dark cement clad restaurant. Every seat was taken and an awkward mass of people clustered around the bar trying to distance themselves from the onslaught of twelve loud horns while still being engaged in the action. 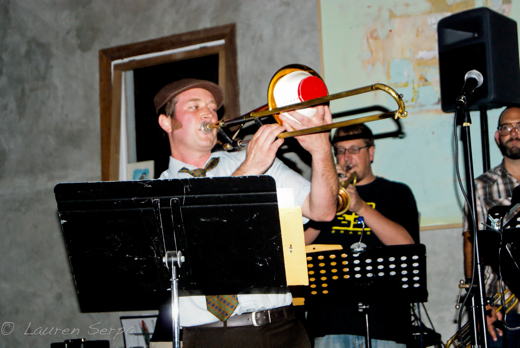 Toby Whitaker stands next to the band as he directs and plays trombone.

While this was the live debut of TWBB, the first tune “#2” was featured on DROP THE NEEDLE in 2010. The tune began with large chords created by pyramids of horns grouped across sections. The composition utilized a nice balance between these pyramids and a simple melody interupted by loud horn hits.

The powerful horns eventually made way to Marlysse Simmons pounding away at her Nord keyboard. Drummer Pinson Chanselle Jr. and Cameron Ralston rounded out the rhythm section that pleasantly sounded like nothing I have ever heard before. Chanselle’s style of big band drumming is unprecedented. His enthusiasm and willingness to distort the meter and form showed an amazing confidence in the other fourteen performers and their abilities to keep grooving.

Whitaker’s writing for large ensemble is mature and it will be exciting to hear him grow during his graduate studies at Rutgers. His compositions feature modern harmony, interesting rhythm and a broad palette of textures. 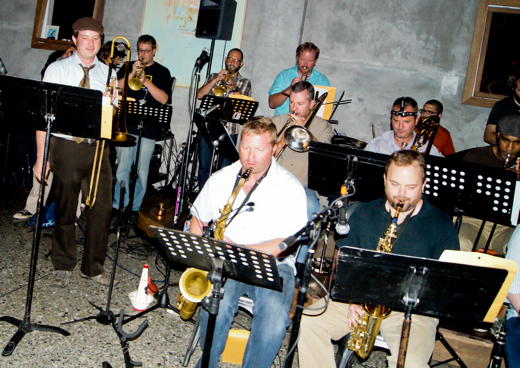 “#1”, another tune featured on DROP THE NEEDLE, started with a horn intro, but the music didn’t truly take flight until the seductive bass melody entered. After the saxophones joined, the tempo picked up and Bob Miller delivered a solid trumpet solo. Whitaker took the final solo and his knowledge of the complex backgrounds paid off as the band’s intensity built to the end.

The fourth tune of the night, “Future Caveman” contained some of the best solo work of the concert. Toby Whitaker, JC Kuhl and Scott Frock all traded phrases over a rim click drum groove, each of them outdoing the next until they all played at once. Finally, drummer Pinson Chanselle Jr. and bassist Cameron Ralston improvised together. Comfortably the two of them, both members of Fight the Big Bull, engaged in a satisfying rhythmic discussion. 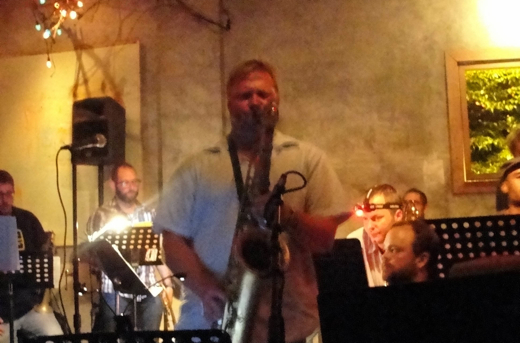 The final tune of the night came too soon for many. “#3” started with a constant stream of quarter notes performed enthusiastically by the bobbing saxophones and clarinet of the front row. The bass added on before the brass entered full force and three different ideas combined to create a unique big band sound. Sticking in his upper register, Jason Scott fought to be heard during his clarinet solo. Simmons then took one last tranquil solo that set the stage for the intense last two minutes of the night.

Listen to Intro and #3:
[audio:http://media.rvanews.com/Introand3.mp3|titles=Intro and #3|artists=Toby Whitaker Big Band] 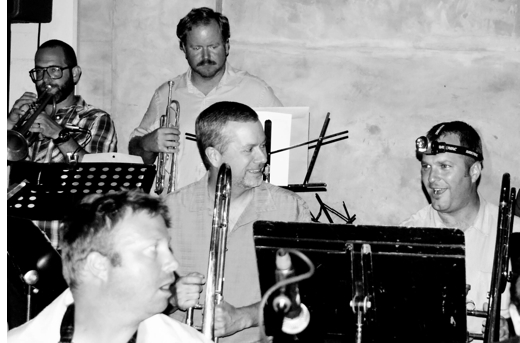 Stefan Demetriadis came prepared for the dark back room at Balliceaux.

Six tunes after the down beat, the house music came back on as the fans were left desiring more. The immediate buzz: “when will this happen again?” I heard countless people state the need for a permanent original big band in Richmond, something that has been lacking since the days of Devil’s Workshop Big Band. There is no doubt Richmond contains the talented musicians and composers needed to have a big band. More importantly, Wednesday showed us there is a crowd willing to listen.

All photos by the talented Lauren Serpa