Tinker Tailor Soldier Spy: it’s not about a soldier/spy

Tinker Tailor Soldier Spy, the newest film from Swedish director Tomas Alfredson, is about the hunt for a Soviet mole who’s infiltrated MI6. It’s methodically paced, but totally worth it. Thus far into my tenure as the pro tem RVANews movie reviewer I’ve seen two spy movies, and I don’t think they could be any more different. Mission: Impossible–Ghost Protocol featured a mystifingly athletic Tom Cruise with rippling abs tearing around the world stopping the Russians from doing what Russians do best: exploding the earth with nuclear weapons. Tinker Tailor Soldier Spy, on the other hand, is about a handful of old dudes doing the real work of spies: talking, reading, and sometimes walking around quietly. If you go into this one expecting a film about a soldier/spy named Tinker Tailor blowing stuff up1 (guilty!) you’ll probably be pretty bummed. 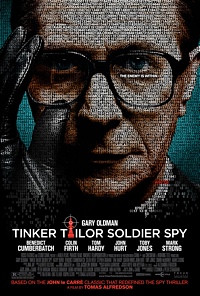 Instead, what you get with TTSS is a film about the hunt for a Soviet mole who’s infiltrated the very tiptop of the British Secret Intelligence Service (aka MI6) orgchart. Gary Oldman plays George Smiley, the recently retired #2 over at MI6, who’s been brought back in to ferret out the mole’s identity. Smiley and his appointed helperguy, Peter Guillam (Benedict Cumberbatch), follow a twisted and complicated trail of interviews, documents, and discoveries to unmask one of Britain’s top intelligence dudes2 as the mole. It sounds fairly straightforward, but it’s not.

At the helm of this flick is Swedish director Tomas Alfredson, best know for Let the Right One In–one of my all-time favorite vampire movies. What made that particular movie so successful was not gallons of blood and dozens of heart-stopping moments, but a pervasive–and incredibly creepy/nordic5–tone. It’s a lot like that Seurat painting from Ferris Beuller: moment-to-moment there may not be a whole lot going on but taken as a whole it’s a fantastic experience. TTSS is a lot like that.

A good portion of the plot is advanced silently with meaningful looks between any of the too-numerous-to-track characters or with short, clipped sentences couched heavily in British spytalk. Heck, Gary Oldman doesn’t even speak until fifteen minutes into the movie! This leaves you, moment-to-moment, confused. But like I said, it doesn’t really matter. At the end of the film, Alferdson has left you confident that George Smiley did a bunch of clever spywork, and the nefarious double agent is sufficiently nefarious. Ebert6 puts it well:

I have every confidence that in this film, every piece of information is there and flawlessly meshes, but I can’t say so for sure, perhaps because I don’t have a mind suitable for espionage.

And, it’s not just Alferdson doing all the heavy lifting either. The cast is chock full of talented Brits (and one Irishman): Benedict Cumberbatch, Colin Firth, Tom Hardy, Ciarán Hinds, John Hurt (of chestburster fame), Toby Jones, Gary Oldman, and Mark Strong. That massive list of main characters should give you an idea of how complex the plot can get at times. But each scene, especially the ensemble bits that take place inside a soundproof box at MI6 high command, is weighty with some serious (although mostly silent) acting. And let’s be honest, one look from Colin Firth is enough to convey one thousand dreamy words.

And really, all of these furtive looks and subtle messages just serve to heighten the tension when the action takes place (and there is some) or the disemboweled bodies turn up (and there is one).

It really is a beautiful movie to watch. The costumes7 and colors are awesome, and a lot of the shots are just plain nice to look at. The pacing is slow, but intentional. And I was still thinking about who double crossed whom the next day–which is always a good sign.

If you saw the preview and thought, “I love Mission: Impossible!” you will be disappointed. If you have no desire (and this is totally legit) to watch a movie that forces you to pay serious attention to every small detail, you should probably check out what’s new on Watch Instantly8. If you hate old dudes, you may also want to skip it–just saying.