This is the End: Brodudes in their final hour

A movie about hanging out in Actual James Franco’s house while the world burns to the ground featuring cameos from everyone that exists! This is the End is the logical conclusion to the string of buddy films–all starring some combination of Seth Rogan, James Franco, Michael Cera, Jason Segel, Jonah Hill, Craig Robinson, and Danny McBride–that began with Freaks and Geeks at the close of the 90s. Not that this is the last film this group of brodudes will ever make, produce, or direct, but it’s somehow fitting and tidy that a TV show about high school kicked and arc of film and television whose capstone is currently a movie about the apocalypse.1

After watching Superbad with my wife, she turned to me and asked, “Is that what it’s really like? Being a dude?” And you know what, it totally is! That’s why we love these guys and their movies, right? It’s always seemed like they’re just up there playing themselves, acting out situations that they’ve probably been in before, or doing what we think Seth Rogan (not his character, but Actual Seth Rogan) would do if he found himself having suddenly impregnated a lady or pissed off the local drug lord. Usually this is great and hilarious (Knocked Up), but sometimes it’s awful and terrible (Oz the Great and Powerful). 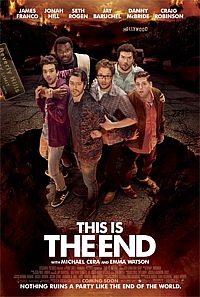 This is the End was lovingly written, directed, and produced, nay crafted, by Seth Rogan (and long time collaborator Evan Goldberg). It’s Rogan’s directorial debut and is based on a horror movie script that he and costar Jay Baruchel wrote in 2007 after filming Knocked Up. Here’s the original trailer–which you should watch instead of the official trailer as you’ll get the entire point and suffer none of the spoilers.

The magic of This is the End, is that the actors aren’t playing characters, they’re just playing themselves. That goes for the principles but also for the nearly two dozen really awesome cameos as well.2 So when the plot takes a turns to the absurd, which it does fairly quickly, we’re left watching what seems like a pretty convincing portrayal of what Actual James Franco would probably do if he was trapped in his house with Actual Danny McBride while Los Angeles burned to the ground around him.

I can’t remember the last time I saw a movie that was so well paced and so consistently funny throughout.3 The jokes are lightning fast, and often the movie’s moved on to the next bit of hilarity before the audience has had time to catch their breath. We’re really lucky that Rogan waited a half decade or so between writing the script and making this movie. Now that he’s a Big Hotshot Hollywood Guy, he knows, oh, just about every funny person that exists, and they all agreed to be in his movie. Not only does everyone who’s anyone have a cameo in This is the End, but they all are extremely self aware and most of the (well written, truly funny) jokes come at their own expense. The rest are dick jokes.

Now, be forewarned, this is a pop-culture person’s film. There are about a billion movie, TV, music, and Hollywood references, plus the trillions of cameos. If knowing about pop culture, specifically pop culture that really excites white dudes in their mid 30s, isn’t your thing, you’re going to miss a lot of the jokes. But that’s OK, you’ll still get the hundreds of dick jokes, because, face it, those are universal.

Why you should see this film

This is the End is the funniest movie I’ve seen in 2013 and features the largest CGI wiener since The Watchmen.

I mean, there are a lot of dick jokes. Relatedly, it’s also a sausagefest.