The World’s End is the third and final film in Edgar Wright and Simon Pegg’s The Three Flavours Cornetto Trilogy. Cornettos, if you didn’t know, are those packaged ice cream cones1 that you can pick up down at the 7-11. Each of the duo’s three films features a cameo from a different Cornetto flavor that relates to the movie’s subject matter: strawberry in Shaun of the Dead (blood & gore), original/blue in Hot Fuzz (police), and mint chocolate chip in The World’s End (science fiction). 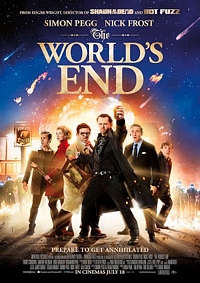 Like the delicious combination of mint and chocolate, The World’s End is a delicious combination of something like Invasion of the Body Snatchers and Old School (but British). You’ve got your five middle-aged guys who want nothing more than to relive The Best Time of Their Lives. Which, for these particular dudes, is the last day of school way back in 1990 when they attempted (and failed) the famed Golden Mile–a pub crawl featuring the town of Newton Haven’s 12 pubs.2 Gary King (Simon Pegg), the gang’s 90s-era leader, now wants to get the crew back together, head to their childhood home, and once again attempt the Golden Mile. And then there some are body-snatching space alien robots!

The World’s End (which, by the way, is the name of the 12th and final pub in the Golden Mile pub crawl) is a very funny movie. Simon Pegg steals the show with his betrenchcoated Gary, but the entire cast (Martin Freeman, Nick Frost, Paddy Considine, and Eddie Marsan) is Britishly funny throughout. Former Bond girl Rosamund Pike gave me the LOLs–even though her role feels kind of like a romantic afterthought–as she shoots down Gary’s overeager sexual advances. There’s a lot of chemistry here, and it hits this particular movie reviewer’s exceedingly soft spot for movies about guys who love each other.

At times The World’s End absolutely sings. Jokes zip by and you’ll be so busy laughing at one that you’ll miss the next. The film’s great scenes just drip with wonderful writing, but the lackluster scenes (of which there are only a few) and overly drawn-out scenes (of which there are more than a few) are sludgy in contrast. And man, the ending is a huge disappointment.3 It’s a clear case of overtelling and undershowing and feels almost like it was written by slightly different humans (perhaps body-snatching space alien robots?).4

But hey! Just like real life, the jokes are plentiful, the characters warm and real, and lots of time people are drunk.

Because it’s super funny and features both Simon Pegg and Martin Freeman, those two smallish British dudes you always get confused.

It’s not This is the End. I know it’s totally unfair to compare these two movies, but I just can’t stop doing it! Minute for minute, This is the End is way funnier than The World’s End. #sahhhhry

The only women in the film, other than Pike, are literally unnamed, hive-minded robots.