The world’s best comic book is made in Richmond

That is not an exaggeration! Atomic Robo makes all sorts of comic-world headway, and it’s created right here in RVA. If you only read one comic book, it should be Atomic Robo. Written by Brian Clevenger and drawn by Scott Wegener, these co-creators publish a story that’s adventurous, accessible, witty, and most of all fun. Scott and Brian were gracious enough to invite me to their studio in Scott’s Addition for an interview. They’ll be doing a signing at Velocity Comics on Friday, October 9th from 5:00 to 7:00 PM.

The story is about the titular Atomic Robo, a sentient robot built by Nikola Tesla in 1923, and his adventures throughout the 20th and 21st centuries. He combats Nazi superscientists, hangs out with Carl Sagan, figures out how to rescue stranded astronauts, fight “not-literally-vampire” vampires, and be frustrated by his nemesis Dr. Dinosaur.

If you’re like me and grew up reading comics during the boom of the early 1990s, you were overwhelmed with unrealistic anatomies, giant firearms, way too many pouches, and brooding anti-heroes. I stopped reading comics because they just weren’t fun anymore. The characters didn’t make me happy, the art wasn’t for me, and trying to follow story continuity in the pre-Internet age felt too much like work.

It wasn’t until the Comixology app for iPad shipped that I opened that door again. Fortunately for me, the first comic I bought digitally was Atomic Robo. The Big Two comics publishers (Marvel and DC) weren’t selling their comics on iOS yet, so people like me who wanted to try out this digital comics thing had to take a chance on titles we’d never heard of before.

I read the first Atomic Robo volume and was delighted. Seeing a robot hit a giant ant with a car just made me smile. It seemed like this comic was written just for me. I took to the Internet to discover who was behind it, and that’s when I found The Promise.

“We were huge comic fans as kids,” said Clevenger, “I wanted to make a comic book that I wanted to read.”

“And we were turned off by the [mainstream comics in the 1990s],” added Wegener. “We love the medium, but there was just nothing for us.”

From that place, the team came up with The Promise, which they made as much for themselves as for their readers:

Anyone can start reading Atomic Robo

Clevenger and Wegner make it easy for its readers to enjoy Atomic Robo. Atomic Robo comes out in volumes, which use 5 – 6 comic book issues to tell a complete story, from beginning to end. The volumes are not chronological–they can be read, understood, and enjoyed in any order. You could pick up a trade paper back of any of the volumes and be happy. Brian: “Because every volume is so different in tone, depending on person, we tend to gravitate towards recommending volume three, five, or seven.”

Because Atomic Robo is a story that spans a timeline of nearly a century, you can follow the same character through a gangster drama in the 1920s, a World War II mission, helping NASA’s Viking program, or arguing with “Steve” about how the iPad doesn’t work if you have robot hands. But, because each volume is its own story, you don’t need to know anything about the story-so-far to enjoy the story in front of you. Says Clevenger, “[In our current volume] you don’t need to know why Atomic Robo is just a head in a box, you just need to know that it’s a problem that it is.”

In too many comics, continuity is a slog. In Atomic Robo, it’s a reward. The volumes do overlap, but not in ways necessary to the central crux of the story. It all fits together, but it’s delivered to the reader in the form of little easter eggs and visuals that reward you for being a fan, not punish you for being new to the story.

At the heart of it, Atomic Robo is just plain fun. The characters take the world they live in seriously, but are not afraid of pointing out when ridiculous things happen to them.

Says Clevenger, “Superhero comics are absolutely ridiculous. You can, every now and then, as a point of narrative punctuation say ‘This is a little ridiculous.’ You should be acknowledging what the audience is already thinking, assure them that it’s OK. You’re supposed to be thinking that, now let’s keep moving and having fun.”

Atomic Robo is for everybody 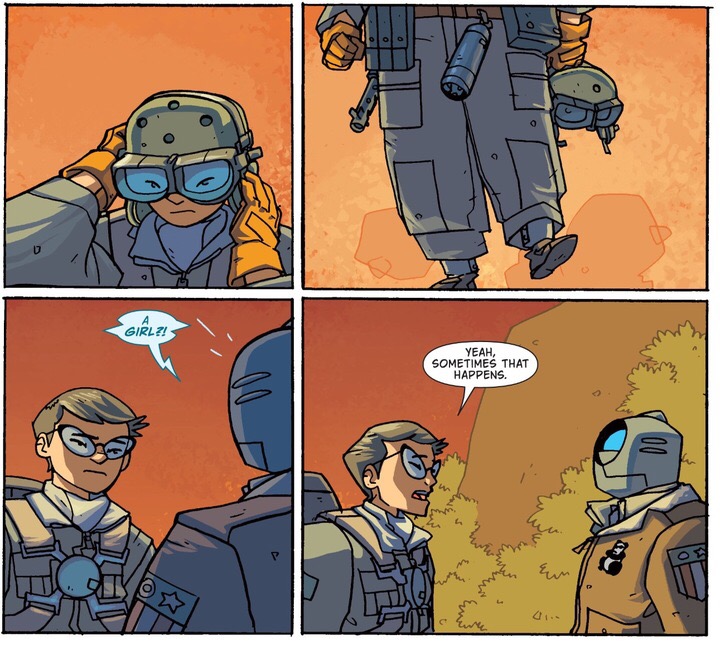 In Atomic Robo there are characters who are scientists, spies, and fighter pilots who just happen to be human women, who aren’t defined by “Look at me! I’m the Lady Scientist!” And they look like women. It’s refreshing to know that my young daughters can pick up an Atomic Robo story and not have just one or two women proxies. There are also women and men of color in the book, who just happen to be Action Scientists.

Clevenger said to me, “There are so many barriers to a new reader. The [mainstream comic book] aesthetic most strongly appeals to teenage boys. There’s all this weird sexist content, not necessarily on purpose, but if it’s just a room full of guys ‘being guys,’ that’s going to come out.”

As independent publishers, Wegener and Clevenger have more freedom to reject those out-of-date tropes. Says Clevenger, “When you are constructing the reality of the comic. You can just choose not to do that. It’s easy.”

“A lot of industry people have been having this conversation [about sexism in comics] for years, but the ability to push forward more progressive content was often shackled by whoever’s actually in charge and what they think will sell. We didn’t have that oversight, we got to do exactly what we wanted to.”

While not specifically labeled as an “all-ages” comic, Atomic Robo is kid-friendly enough for my daughters (5 and 8) who seem to enjoy it. There’s some violence, but it’s never graphic, always contextually revelant, and most of the time it’s a robot punching another robot. Atomic Robo’s favorite expletive is “Applesauce!”.

“We make sure to keep it no worse than anything you’d see on network television,” said Scott. And Brian added, “We aim for Ghostbusters or Indiana Jones. Stuff that’s not specifically made for kids, but it won’t warp kids if they do see it.” 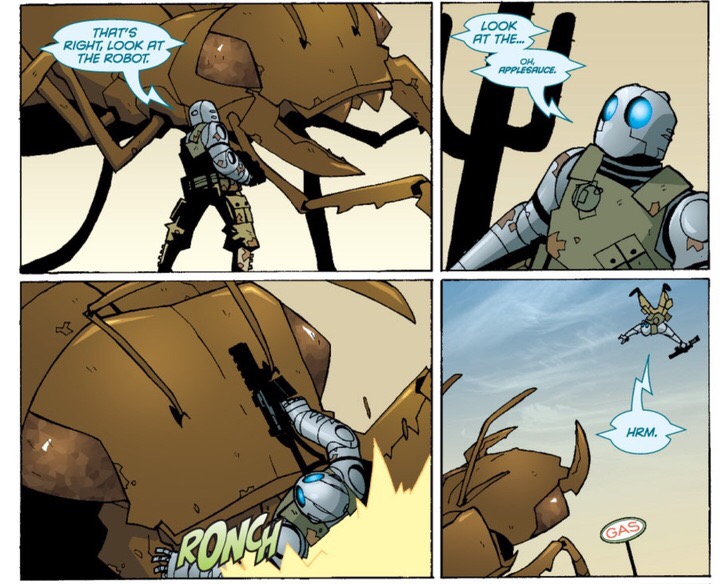 Atomic Robo is made in RVA

Scott and Brian live and work on Atomic Robo full-time in Richmond. They recently ran a very successful Kickstarter, receiving over $184,000 in pledges to help them print hardcover copies of the volumes so far. They’ve also entered into a new relationship with comics publisher IDW to make sure single issues and soft-cover collected volumes appear in retail outlets like comic book and other book stores.

You can also read all of their comics on any device that supports Comixology, or get it directly from their website 1.

Brian has lived in Richmond for some time, but Scott moved here just over two months ago. When asked why his family chose to live in the River City, Scott answered, “It’s got a really great music and arts scene. And Richmonders love to eat. Food, music, and art–It’s got my three favorite things. It’s large enough to support those communities, but small enough that those communities are accessible.

“You get everything that a larger city can offer you with the massive benefit that nothing is more than a five-minute car drive away. It’s one of those great hidden cities.”

And could a bigger comic books scene grow in Richmond? Scott thinks so: “I’m looking forward to meeting other [comic book creators] in Richmond and perhaps forming an art group”.

Without committing to anything, Brian and Scott said it’s possible that RVA may make a cameo in a future issue of Robo. They let me listen while they brainstormed what would happen if Atomic Robo punched a monster down Monument Avenue 2.

You can meet Atomic Robo‘s creators