Movies outside—perhaps the single best thing about summer. Richmond’s got a long tradition of open air cinemas, and Maat Free is here to tell you about it. This week on The #untoldrva 5 Things: Open Air Cinema Edition, we’re digging into the legends and lore of Richmond’s most memorable outdoor movie moments. Here, we have a well established local tradition that goes back 100 years to the delight and amusement of all kinds of people who enjoy the freedom of relaxing under a dark canopy of stars. Join us as we take you on a behind the scenes journey through the evolution of drive-ins and lawnchair film festivals, with an exclusive sneak peak of what’s to come.

So there used to actually be an outdoor movie theater in Byrd Park, did you know? Are you one hundred and nine years old? No? Well then, yeah, you probably wouldn’t have been there but thanks to the Bijou Backlight blog, this hidden history’s been preserved.

Apparently, people sat around with their lawn blankets and snack baskets in 1906, reclining on the rolling hills of Byrd Park to watch what is described as a “photo drama.” Not sure if anyone knows exactly what films they showed (there weren’t many in existence). Googled it, couldn’t really tell. Even the local experts were unclear. What they do know is that back then, the area was known as the New Reservoir Park, which was also right across from the Idlewood Amusement Park. The nighttime film component manifested from the vision of a sporty guy named Jake Wells, also known as the father of Richmond movie houses and one of the most popular folks in town.

Wells had one hellified hustle. He was always doing something edgy and cool–his friends were among Richmond’s most creative innovationists. This is definitely someone to look back and thank for sowing the seeds of indie film culture, new media, and basically elevating the whole theater scene here in RVA. His theater empire established 42 movie houses in the Southeast and countless outdoor screenings under the stars. Definitely look out for the resurgence of Wells’ legacy at the Bijou Film Center in Richmond, a new nonprofit independent art house cinema, café, and film center, coming soon to RVA’s downtown arts and cultural district. Everyone’s stoked. It’s going to be amazing. 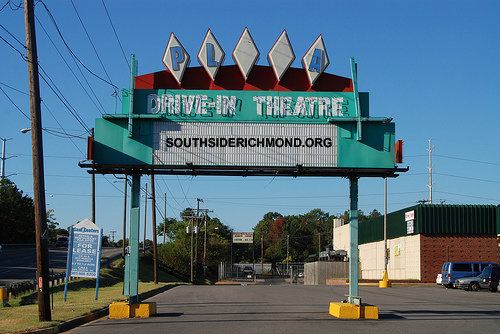 Drive-In movies were part of so many people’s childhoods. The Plaza in Southside is legendary. You’d head down Hull Street towards the gate, pay a fee, drive your car into a parking spot, and roll down the window. The audio to the film would come through the car via your car radio. You could buy snacks or bring your own. You could focus on the film or focus on your date. It was excellent.

What happened though? Whose hare-brained idea was it to close our beloved Southside drive in? What better place to have been able to see The Empire Strikes Back and Flash Gordon and The Goonies, right? By the time those films came out, the Plaza’s gates were rusted shut. Booo. But then, hoorah! They decided to open back up in 1994. It was a miracle…only the magic didn’t last very long at all. By 1998, it was wrap. In the end, it had a good run–originally opening in 1957, so what is that, like 41 years? It’s a good thing people decided to keep the outdoor movie thing going. Otherwise, we’d have to stop the timeline right here. Let’s keep going. 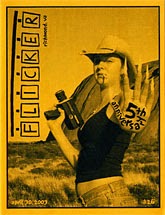 I got a chance to kick it with James Parrish last night at the grand opening of Studio Two Three in Scott’s Addition. James is really cool. Back in 1998, he started an organization called Flicker to support the development of Richmond’s Indie Film community. The more backstory he divulged, the faster I scrawled my notes with a black sharpie on printmaker’s paper. We must have looked like we were hatching a plan to overthow City Hall because TWICE we looked over and saw Harry Kollatz, Jr. ear-hustling for the lowdown on what we were so deeply engrossed in. Harry finally realized that he was more than welcome to come chill with us. I had to get a whole lot more paper.

Anyhow, after the three of us did a whole a lot of obnixious belly laughing about completely unrelated stuff, James told me about the outdoor Super 8 films he’d show on the river, down by the canal in the 1990s. They’d project experimental projects right onto the flood wall. People loved it. His series was actually a collabo between Flicker, InLight, and 1708 Gallery. Really innovative stuff for back then. We’re just catching up to their momentum 20 years later.

I wanted to know what inspired James to show outdoor indie films, and when I asked him, his face literally solarized itself. That’s when he began to tell me about “Grandma’s Biscuits.” Right around the same time he founded Flicker, James made a quaint Super 8 film of his grandmother fixing breakfast, just to make sure that this family tradition never faded away. Guess what? Here’s a link to the film. It’s a Richmond classic. You’ve gotta see this: 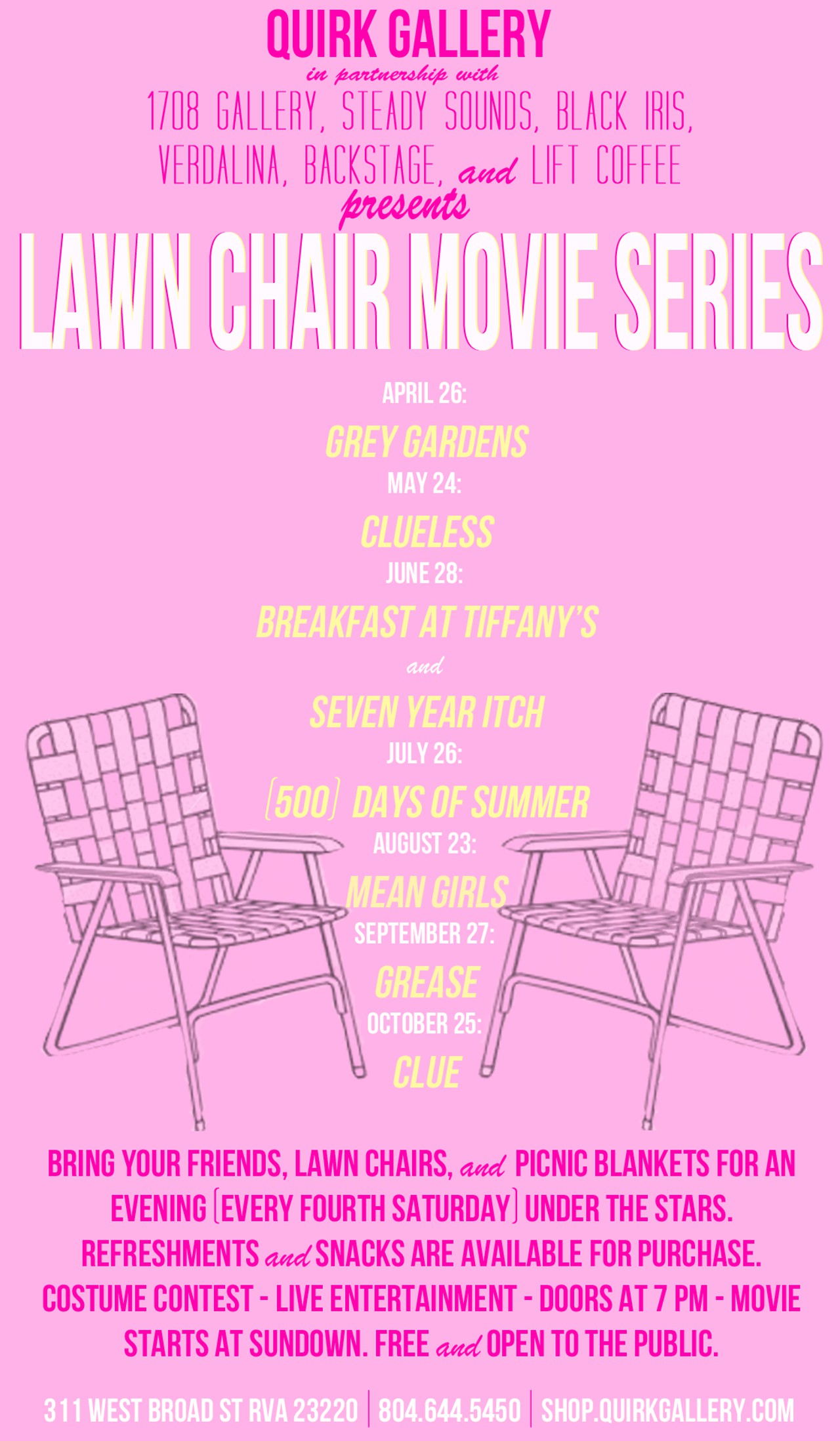 Quirk Gallery picked up the slack and made sure someone was holding it down for RVA’s outdoor movie scene. They began inviting people into their outdoor lot on the fourth Saturday of the month for a really laidback lawnchair film series. They’ve shown all kinds of stuff: comedies, classics, and off-center IFC type films too. All you’d have to do is bring something to sit on, something to munch, and they’ll do the rest.

The series was very well received and had its last run in 2014 from April to October as a collabo between Quirk and 1708 Gallery, Steady Sounds, Black Iris, Verdalina, Backstage, and Lift Coffee. They gave away prizes for people that wore costumes related to the film and always had free snacks to munch on, just in case you forgot to pack your own little basket of treats.

It’s definitely something people enjoy, and if they decided to bring it back, I’m pretty sure some of us would be over there in the side lot chilling out on the fourth Saturday with our goofy costumes on, vying for that grand prize.

5. RVA OF THE FUTURE

Last winter, Enjoli Moon began thinking about how to carry on in the tradition of outdoor films in a new, exciting way. She’s a dear friend and founder of the Afrikana Film Festival, sponsored with generous support from Croaker’s Spot restaurant. Enjoli’s been part of the Croaker’s Spot family for years, working her way up from server to general manager and now, as Director of Community Engagement. When she told her boss, Neverett “Sugarfoot” Eggleston, that her heart was leading her to establish a film festival to feature the artistic contributions of Indie filmakers who explore African diasporic themes with compelling narratives, he stood behind her 100%. This is where Afrikana began. After just having passed the one year anniversary a few months ago, Enjoli is set to roll out her new Starry Night Lawn Chair series next week.

Afrikana’s had a very impressive run so far. There was a Fela documentary at the Byrd that packed the house. There’s the Noir short film series, which runs in the fall/winter seasons at the most impressive art galleries in town. Then there’s the Starry Night Lawn Chair series, which will have three offerings this summer, two outside on the beautiful grounds of Tredegar Ironworks at dusk, and one on the rooftop of Art 180 in September.

Enjoli is a visionary. The support for what she’s building has poured in from all over the city. The Virginia Film Office has granted Afrikana with funding to keep the films accessible to anyone who wants to come out and enjoy this meticulously produced experience. There’s always an eclectic audience full of fascinating Richmond creatives in the building, delicious wine, fabulous morsels of food to enjoy…and the film selection is top notch.

The next event is this Friday, July 17th at Tredegar

Don’t miss this screening of acclaimed feature length documentary Fresh Dressed, which is the type of independent film that gets instant classic status. Come see for yourself the evolution of the outdoor cinema experience, brought to you by Afrikana Film Festival, dedicated to celebrating global Black culture in RVA through the medium of independent film created by and about Black people worldwide.

Wanna take a listen to an exclusive, next-level dialogue between me and a special Open Air Cinema Edition guest? Sure you do, you’ll love it! Tune in to WRIR 97.3 at 9:00 AM on Friday, July 17th for “The #untoldrva 5 Things” radio show. It’s a full hour of talk, music and random quickfire questions for our secret guest. We always have the most fun. You should check it out.

Don’t forget to keep up with #untoldrva on Facebook and stay tuned for what’s happening with our little side project COMMUNIVERSITY as we make a way for the brightest, brokest folks who deserve to be in the room. Get in touch by emailing <mailto:”joinus@untoldrva.com”>joinus@untoldrva.com.

Learn more about #untoldrva on the website or get in touch at joinus@untoldrva.com. Link up with us for more info about COMMUNIVERSITY as well.