The Twilight Saga: Breaking Dawn, Part 1: A study in efficiency

This…THIS is what you guys have been going on about all this time??

I almost began with a disclaimer that would have gone something like this:

I am not TRULY qualified to give an educated opinion on anything Twilight, having not read any of the books or seen any of the previous movies.

But I’m rethinking that position. I’ve got ears, eyes, and the Internet. I think I’ve got a sense of what it’s all about: A pale, sparkly guy gives an underappreciated teenage girl the attention she deserves, without deflowering her. Later, a werewolf will have abs. 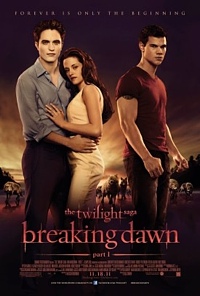 If there are some subtleties I’m missing, and I’m not saying there are, they certainly don’t seem to come into play during Breaking Dawn.

In fact, the whole film seems to be based on such a flimsy plot structure that the “filmmakers,” led by director Bill Condon were forced to spend an inordinate amount of celluloid stalling for time wherever they can. Jacob walks grumpily up several flights of stairs. Bella searches her face in the mirror for signs that she is finally ready for marriage/sex/demon-babies. Edward and Bella play riveting games of chess instead of doing it (all that passion the trailers promised us is relegated to about four seconds, sorry). And, best of all, venom shoots through animated blood vessels, coating them in undead brilliance, until even the toddler someone brought into our theater was clearly aware that Change Is Happening Within This Person.

But these little interludes are beside the point, I know. The main action is this:

Warning, the following plot summary contains facts that will spoil this film for anyone who has not seen a film before.

OK, it’s not much of a narrative, true, but people have done more with less. Not so here: Breaking Dawn feels like a staged reading at a high school with Kristen Stewart doing a passable imitation of an awkward teen–probably because she’s not capable of much else. Everything from the CGI wolves to the paleface makeup is phoned in (you’d think they could at least lightly swab the vampires’ necks with that white stuff), and every single shot is predictable, down to the final, dramatic reveal.

But then, after I’d apologized profusely to my husband for dragging him along (although, to be honest, I’m pretty sure he enjoyed doing impressions throughout of vampires-as-white-faced-lipsticked-mimes), I came to a realization. Why not make a crappy movie? Think about it! Every die-hard Twilight fan is going to see this film and the sure-to-be crappy one after it*, no matter what. So why spend the time and, more importantly, the money to hire decent actors or cultivate the talent of the ones you’ve got (I find Robert Pattinson both repulsive and wooden, but perhaps he hasn’t been given a chance to really, er, sparkle?)? Why have dazzling special effects? Why do anything except the bare minimum to get something into theaters that costs $10 a ticket and will break box office records no matter what it looks like? It’s pure Hollywood brilliance. The most ardent fans will buy all the merchandise and band together for repeat viewings, and the lukewarm fans will forgive it with a, “I liked it for what it was,” while quietly looking forward to Part 2. Hollywood doesn’t care about everyone else. Breaking Dawn is not for them.

So my advice is this: if you’re going to see this film, you already know who you are. Good luck, and bring a caffeinated beverage.

*And that’s OK, I guess. The overwhelmingly saccharine message seems to be, “Be super, super careful about who you have sex with, because you could have a demon baby in mere weeks,” and that’s not necessarily a bad thing to tell young people.