It’s a gross summer comedy about teens getting nasty, but hear me out, this one is different. Nothing has shocked me more than The To Do List, this summer’s sex comedy that stars Aubrey Plaza, Connie Britton, Bill Hader, Andy Samberg, and four billion other people. It didn’t shock me because it’s got pretty graphic descriptions (and sometimes depictions) of various sexual acts, and it didn’t shock me because high school valedictorian Brandy Klark (Plaza) goes about discovering those acts in a brazen, impatient, “let’s get this over with before I go to college” way. It didn’t even shock me that it Jason Street can walk again.1

No, friends, I was shocked and appalled that this comedy got mixed reviews—this beautiful, disgusting, awkward comedy about how girls view this whole “losing your virginity” process (often with scowls of disappointment, dudes). 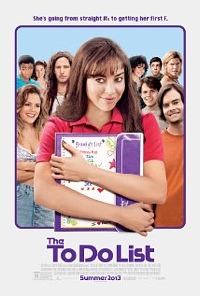 First of all, anyone who enjoyed Superbad but not The To Do List is doing it wrong. I don’t know what “it” is, BUT MAYBE IT IS LIFE. The jokes are funnier, the perspective is fresh, and the opposite sex (in this case, men) get a chance to be heard. Plus, the interplay between teenage sisters (who knew Rachel Bilson could be so funny?) is hilariously accurate, as is the cluelessness of an overly ambitious high school girl (guilty), the hero worship of a hot dude who doesn’t turn out to be an asshole (it happens sometimes), and the fact that we all used to stack scrunchies on our bedposts.2

Brandy has lofty dreams that thus far have not been dirty ones. She’s way into First Lady Hillary Clinton (it’s 1993, btw) and wrote her own, proud introduction for her valedictorian graduation speech. In three months, she’s headed for Georgetown University, but after an embarrassing gropefest with the town Hot Dude (Scott Porter, Friday Night Lights), she realizes that she’s going to arrive at college with a serious disadvantage: she doesn’t know what the hell she’s doing in the gettin’ busy department.

Her older sister, Amber (Bilson, The O.C.) is more than happy to gloat that she’s finally better at something than Brandy the Prodigy. And with her friends delighting in the prospect of a less-uptight pal, Brandy makes a list of all of the sexual terms she is going to add to her permanent vocabulary as well as her experience bank.

Did I mention it’s 1993? The Internet doesn’t exist yet, at least not for those of us who aren’t Al Gore, so Brandy has plenty of opportunities to misunderstand and misrepresent the things she wants. She’s pretty hard to embarrass, though. It’s the ‘90s, after all, and women are entitled to a thorough sex education if they want it. Brandy’s mom (Connie Britton) has some of the funniest moments in the film, as a medical professional (it’s not clear what kind) who just wants her kid to have the facts and avoid the trauma of being unprepared. Her dad (Clark Gregg) observes his household of sexually confident females with a lot of anxiety and a little nausea, while Brandy’s co-workers at the community pool (her boss, played by Bill Hader, Hot Dude, and her lab partner Cameron, played perfectly by Johnny Simmons) are mystified, amused, and a little stoked about the whole thing. Cameron, unfortunately, has real feelings for Brandy, whose drive to be the best has made her oblivious to the emotions and the egos of people around her. Poor Cameron starts to appear repeatedly on Brandy’s sex experience list, while he believes they’ve finally begun to date.

Bodily fluids abound in The To Do List, but in lower quantities than in any given Judd Apatow flick. And sure, the sexually curious female perspective is jarring at first, maybe even throughout, but ask yourself what the heck does that mean about the teen comedies I’m used to seeing?

I’m shooting this up to #1 on our current Best Movies of 2013 (So Far) list, so if you tend to like comedies that I like (Bridesmaids, Frances Ha, Tropic Thunder), you’re good to go. It’s got everything I like in it: jokes about grunge rock, vag jokes, evolved humor, and Caboodles™. For real, that’s the entire list!

The Bechdel Test was created to sadly demonstrate that this movie will never exist. Well done, 2013!