The Raven: eat my shorts

It’s 1849. Edgar Allan Poe is about to die penniless and alone. Good thing he has a few days to solve crimes before he sinks into eternal darkness! There’s nothing Edgar Allan Poe liked better than a creepy mystery with an ending that makes you go “Hmmm.” So it’s a good thing he died when he did. The Raven is many things, but thrilling whodunit isn’t one of them. But you have to give it credit for instilling a Poe-like sense of tragedy: it’s tragically miscast, not to mention poorly plotted, liberally infested with boring CGI, and even manages to tangle up an incredibly simple storyline.

Good ol’ Gothy Poe met his end, the movie tells us, on a park bench in Baltimore. BUT NOBODY KNOWS HOW HE SPENT HIS LAST DAYS! Nobody, that is, except John Cusack and the good folks at Intrepid Features. It turns out, Poe was a lovable, zany alcoholic, with a Cusack-like way of being both smug and earnest at the same time. In love with a rich girl (played by Alice Eve, who is actually quite good) who loves him back, Poe isn’t all that upset about the fact that his creative reserves are dry as a withered old corpse. Luckily for him and unluckily for just about everyone else in the story, there’s a serial killer out there, wreaking havoc among the denizens of a very grey Baltimore that looks uncannily like the London of 2009’s Sherlock Holmes. 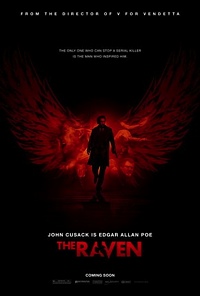 What’s all this got to do with Baltimore-I-mean-Richmond’s favorite literary hero? THE MURDERS ARE BASED ON DEATHS IN POE’S STORIES! Yes! The very same diabolical historical fiction short story plot idea you had during a particularly boring English class in seventh grade! Somebody got that idea made into a movie!

So there’s pits and pendulums, not to mention masques and hearts, and Poe keeps blundering around buffoonishly until the clues lead him right to…well, you know! A minor character who’s become every celebrity’s nightmare of a superfan. It’s all very unsatisfying, not least because the guy playing the impassioned police inspector looks almost, but not quite, just like McNulty.

I was all prepared to say that The Raven is a cross between Abraham Lincoln: Vampire Hunter and that oft-forgotten Jack the Ripper mystery, From Hell. But dang, if that doesn’t sound like kind of an OK flick!1

All kidding aside, The Raven is harmless enough and may even be a lot of fun if you take a swig of something strong every time you see an actual raven.2 Although a little dreary, Baltimore has never looked more charming, and John Cusack is entertaining as usual, if impossible to reconcile with our inner vision of Poe. Although who knows, maybe Poe was a swaggering, uber-confident, very tall wit after all.

You feel like you’ve seen too many good movies lately and you don’t want the bad ones to feel left out.

You know bad films deserve what they get.