The Pride: The right to have a voice Written by Alexi Kaye Campbell, The Pride follows the lives of three characters in two different time periods: 1958 and 2008. Set in London, the play focuses on the differences in their lives as a result of the era in which they were raised.

In 1958, Philip (Nicholas Aliff) is married to Sylvia (Stacie Rearden Hall). They are presumably happy, until a colleague of Sylvia’s—Oliver (Stevie Rice), a children’s book author—enters into the picture. The chemistry between Oliver and Philip as they share a glass of scotch before taking Sylvia out for the evening cannot be ignored, and even Sylvia “feels something” in the room. Throughout the scenes of this era, secrets, stereotypes, and suppressed feelings are painfully present.

In 2008, Philip and Oliver are working through a not so pretty break up due to Oliver’s chronic infidelity. Amidst drowning his sorrows in scotch, Oliver turns to his best friend Sylvia to rid him of his loneliness. Throughout the scenes of this era, feelings and actions are far less hidden. You can watch Oliver’s temptations as they present themselves, feel Philip’s heartache, and empathize with Sylvia’s frustrations. 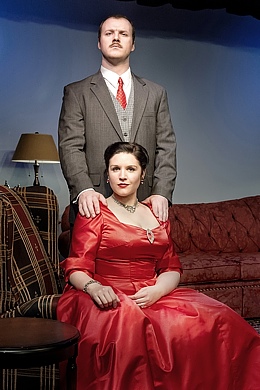 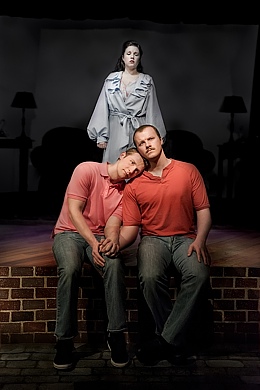 In 1958 and 2008, a fourth actor, Evan Nasteff, plays three different characters that introduce the public opinion of each generation, whether it be one that is spoken or inferred. He comes across as slightly naive in each of his characters, which allows the audience to interpret his behavior in the way they feel most applies to that time period.

Within each era there’s a connecting theme of hope: hope that life will become better than what each character has known, hope to be heard and accepted, hope to love and be loved.

The Pride is a beautifully raw love story that’s impacted in different ways by the harsh realities of two “present day” scenarios. Aliff, Hall, Rice, and Nasteff bring a distinct realness to the stage in the way they tell this love story. When delivering their lines and interacting with one another, you feel every ounce of their emotions. The actors and actress also strike a very appropriate balance in their display of humor, sadness, anger, and sexual activity—none of which seems to be overused or unnecessary.

Each actor and actress seamlessly flip-flops between years, picking right back up where they left off. Their ability to assume the same character while portraying a different story line in a different time period keeps your attention on the lines being spoken and not the transitions occurring.

The Pride runs April 27th with performances Thursday – Saturday at 8:00 PM and Sunday matinees on April 14th and 21st at 4:00 PM. Tickets start at $21 and can be purchased online.

You want to walk away from a play that leaves an open opportunity for discussion with family and friends.