The Muppets: still got it

Who’s your favorite Muppet? HOW COULD YOU NOT LOVE ANIMAL THE MOST. HE IS SO ALL-CAPS. DRUMMMMMSSSSS.

The reason for the enduring popularity of Jim Henson’s Muppets is a no-brainer–they’re cleverly written, they’re cutely designed, and we watched them cavort around on both the small and large screens when we were kids.* They’re basically screaming for Jason Segel to bring them back to us in the burst of nostalgia that is the new film, The Muppets. 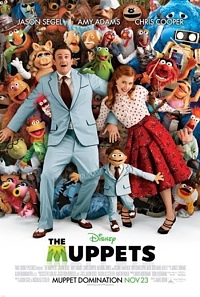 And what a job he did! Everything you’ve heard about the film is true. It has the exact same feel as a Muppet movie from days of yore (although the last one was as recent as 1999–not quite a 25 year hiatus or anything, but still…it’s been awhile), incorporating scads of cameos, absurd humor, and classic musical montages. As usual, a couple of sympathetic humans, in this case Gary (Segel) and Mary (Amy Adams), help the Muppet gang defeat an evil stereotype of an enemy. This time, that villain is an oil tycoon named Tex Richman, somewhat awkwardly played by Chris Cooper, and he intends to demolish the old Muppet studio for the oil underneath it. According to their contract, the Muppets have a finite amount of time to raise a finite amount of money to save it, and, my dears, we have the plot.

But the movie is purposefully and self-referentially simplistic like that, constantly mentioning its own plot points as such. As it points out, this plot is just a vehicle for whip-smart jokes, and we might as well call a spade a spade. While that goofball attitude is fairly refreshing, it doesn’t change the fact that the plot is kinda boring. I found myself becoming impatient for the things we knew were going to happen, although there’s certainly an argument to be made for sitting back and just enjoying the comedy.

That said, I could have used less of both Segel and Adams, whose wide-eyed characters didn’t serve too much of a purpose–apart from a couple of truly hilarious Segel scenes (the “Muppet of a Man” song is pure genius). And since we’re here to see Piggy knock over Kermit and Animal bang on the drums, their relationship wasn’t all that compelling.

It would be silly to list all the scenes that werecompelling, though, because there were seriously about a billion, all hilariously written and performed. They easily outshine any of the draggy parts, and, honestly, there’s a barbershop quartet scene that I could watch over and over again and still find hysterical.

So, no complaints about this film, really. It’s just a general celebration of all things Muppet.

* Personally, I was a little young for The Muppet Show, but enjoyed the movies and was a religious Sesame Street fan for years. Oh, and I watched the crap out of Muppet Babies, of course.