The Ides of March: Politics with that special Clooney touch

The coming election year makes me feel sick at heart. I don’t look forward to all the mudslinging and the griping and the soundbites and the bumper-sticker-puns-that-don’t-mean-anything. In fact, I sort of wish I could just pretend like it’s not happening at all and focus instead on my much less draining Netflix queue. I know that’s sooooo civically irresponsible and that I should be seriously ashamed of myself, but as political reporter Ida Horowicz (played by Marisa Tomei) says in The Ides of March, will the outcome actually affect my day-to-day life? 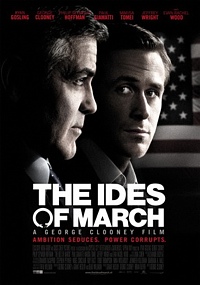 George Clooney’s new political drama asks this and more of an America that, like me, is weary of an election before it’s even begun. Is any one candidate ever perfect? How much of all of it is just marketing that’s carefully calculated by teams of professionals whose sole job is to turn the tide of an election by selling their human product to the masses. But then what? What do those campaigners do? Do they have lives beyond that? Does any of this actually mean anything?

Governor Mike Morris (played by Cloonz) is an obvious Obama figure, complete with posters that are almost laughably identical to Shepard Fairey’s iconic 2008 pieces. Weathered campaigner Paul Zara (Philip Seymour Hoffman) is doing what he’s been hired to do, but his direct report, RYAN GOSLING…sorry, hrm, Stephen Meyers (played by just some run-of-the-mill dude whose name I can barely recall) has some real emotions about his chosen candidate. He thinks Morris is the real deal, the guy that can really make a change. He’s impressed with his integrity, his unwillingness to make deals, his refreshing and honest candor with the people. When the other Democratic candidate’s campaign manager tries to poach Stephen, he refuses. He likes his guy, and there he’ll stay.

Stephen isn’t exactly wide-eyed and naive. He’s worked on a ton of campaigns, he assures us, but the Governor is unlike any politician he’s ever seen. Combined with a couple of episodes that prove Morris’s stand-up-guy-ness, Stephen’s zeal has us pretty much convinced. So it’s a huge blow to both of us when Morris turns out to be less than perfect.

Slowly, things start to crumble for Stephen, as he struggles with betrayal, disillusionment, and fear all at once. The extra-adorable Gosling does something genius with his face over the course of the film’s scant 101 minutes. By the end, you realize you’ve seen him go from staunch loyalist to stonefaced force of nature without ever seeing him totally lose his shit. It’s just something he does with his eyes, and I know this because I stare intently at them much of the time.

Call me crazy, but I feel Cloonz was miscast as the can-do, change-agent that is Morris. I’m surprised at myself. I thought that when the inevitable happens and he actually runs for our real-life president one day, I’d be first at the polls. But playing a candidate who’s supposed to be America’s Savior just didn’t work for him. He’s too sardonic, too cynical. Sure, he’s charming. He practically invented charm. But he just doesn’t have any of Obama’s earnestness. It was difficult and disappointing to imagine Clooney’s Morris doing the Bad Thing that he did, but it would be downright shocking to find Obama in the same boat.

I was fascinated by The Ides of March and how it so directly reinforced my desire to pretend like next year isn’t happening. The film doesn’t offer a solution to America’s political disfunction or even really surprise with any big exposés of the campaign process, but it does challenge some of us to reconsider dividing everything into simple, elegant reds and blues.