The Heat: Two women talk to each other about something besides a man Just last week we added The Bechdel Test as a regular part of movie reviews on RVANews. If you’re not familiar with the test, it’s a quick and clever method of assessing gender bias in a film. To pass the test, a movie must fulfill three criteria:

It’s not particularly tough criteria to meet, but so many movies fail to do so; it’s frustrating and embarrassing. But things are improving!–most recently through the work of director Paul Feig and actor Melissa McCarthy, starting with 2011’s Bridesmaids. Remember how awesome Bridesmaids was? Remember how Melissa McCarthy was nominated for Best Actress in a Supporting Role3 and Kristin Wiig was nominated for Best Writing? Remember when the world was shocked, shocked I say, that a female-driven R-rated movie could succeed both critically and at the box office? Which, honestly, shouldn’t have been all that surprising to anyone since both women and men are probably interested in seeing authentic and interesting portrayals of women on the big screen. 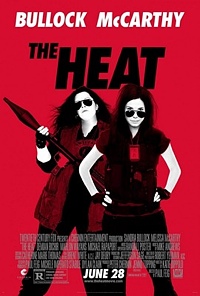 Undeterred by their blockbusting commercial and critical success, Feig and McCarthy bravely set out to make another massive summer hit–this time, The Heat, a buddy-cop film written by Katie Dippold (a woman herself!). Now, a buddy cop movie featuring two women is a very rare thing indeed. I mean, I can think of two buddy-cop movies featuring dogs, and that’s exactly two more than the entire set of all-female buddy-cop movies I can think of. But–other than exploring a crazy world where women have jobs, handle weapons, and take down bad guys–The Heat follows the ancient and proven ways set down by the hundreds of buddy-cop movies before it.

FBI Special Agent Sarah Ashburn is the Felix to Boston PD’s Detective Shannon Mullins’s Oscar (Sandra Bullock and Melissa McCarthy, respectively). Ashburn is overly clean, irritatingly straight-laced, and pretty much a huge loser. She’s brilliant in that “annoyingly always right” kind of way, which doesn’t win her any friends at the FBI. Mullins is also pretty irritating, but in a “may blow you up with a grenade” kind of way. Despite her sometimes…creative…policing methods, Mullins is also incredibly good at her job. A thing happens, and the odd couple is forced to work together. It doesn’t really matter what the thing is because you’ve probably seen a bunch of these movies before.

And that’s not a knock on The Heat. Can anyone remember the pertinent details from 48 hours, Rush Hour, or Turner and Hooch? These movies, The Heat especially, aren’t about whichever international villain or whatever crime ring, they’re about the, hopefully, brilliant interplay between the two buddies. The Heat does this really well and does so with two women–something I’m sure a lot of people questioned along the way.4

The best parts of The Heat are when the plot intentionally gets out of the way and lets McCarthy and Bullock do their thing. I’m not sure if it’s excellent writing or a willingness from Feig to sit patiently in the moment and let the scene unfold however McCarthy and Bullock see fit (I’m leaning towards the latter). Things do get heavy handed at times, when Dippold is basically shouting at the audience, “THERE ARE CHALLENGES FACING WOMEN.” But can you fault her for spoon feeding it to us? It’s 2013, and only four women have ever been nominated for Best Director.5 It’s like we’re having a hard time grokking the situation, here.

But still! It was a brave script to write and a brave movie to make. It will make everyone involved millions of dollars despite the prevailing opinions of Hollywood/America/humans. Unfortunately, we will still have the same conversation about the viability of the next attempt at a female take on a previously male-dominated genre, but this time we’ll be able to point to both Bridesmaids and The Heat. Baby steps.

The Heat is good, not great. It’s not as LOL-worthy as Bridesmaids, but your laughs will certainly be out loud. There are no dogs involved and only one cat.

What you should stay home

If you’re from Boston, you might be tired of the way Bostonian families are portrayed in movies. But maybe that stuff is accurate? Do you guys yell at each other all the time and wrestle a lot? Let me know.

This passes the Bechdel Test so hard, that I’m not sure it would pass a similar (and absolutely unnecessary) male-focused test.