The Great Gatsby: Explosions of grandeur

Baz Luhrmann is up to his old tricks, and that’s almost a really good thing. It’s 1996. I, my friends, and every other sixteen-year-old in the world are milling about outside movie theaters, unable to form coherent sentences1 due to the profound experience we just had watching Leonardo DiCaprio play a gun-toting Romeo.

This one guy we knew had delicate blonde curls and those thin, translucent fingers of the undead. He was too slender and almost too weird, and he danced like a pubescent Puck in a little ring around our group of miscreants, high on Shakespeare. Glancing about at the various pockets of baseball-cap-wearing normal dudes peppered throughout the parking lot, Translucent Fingers threw back his cape (yep) in anguish. “These PEOPLE,” he cried. “These PEOPLE don’t even know what ‘My only love sprung from my only hate’ even means!” And as he said this, I do not kid, he crumpled to the ground into a graceful, despairing heap. Possibly weeping. 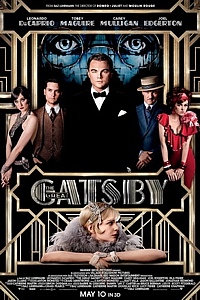 Yeah, I’m pretty sure everyone knows what that line means? But we were like “Oh totally, Greg. Those oafs! How dare they sully this cinematic triumph that was clearly made SPECIFICALLY for people like us, the sensitive ones. The ones who GET it.” The film, however, was that powerful that we weren’t the only ones who got it. Those baseball caps were as transfixed as we were, and it was all anyone talked about at school for a few weeks.

This transcendent piece of ‘90s teen cinema was known as Romeo + Juliet. And if you’re rolling your eyes right about now, may I remind you that THEY FALL IN LOVE THROUGH A FISH TANK (SOMEHOW THAT WAS A HUGE DEAL). Baz Luhrmann, who had heretofore produced only Strictly Ballroom, one of my all-time favorite films (then and now), was on a roll. After Leo and Claire Danes became fortune’s fools to a chart-topping soundtrack of Radiohead and…some other bands, Luhrmann came out with Moulin Rouge!,2 a successful venture all around. Then, in 2008, Australia, which didn’t do all that well despite graphic footage of Hugh Jackman taking an outdoor shower. So the quirky, gimmicky, and often brilliant Aussie director bided his time until this year’s The Great Gatsby, and I must say, it’s got a lot of the same energy.

Leo’s back, in case you’ve been living off the grid and haven’t seen the ads, but instead of Jules, he’s got his eye on Daisy, played by Carey Mulligan. I’ll fill in some facts for anyone else who’s rusty on their Fitzgerald:

It’s set in the early 1920’s, with Manhattan, Long Island, and the literal and figurative space in between as a backdrop, and that’s stellar, because it was a wild ride back then. Awesome parties, slick cars, loose morals, fountains of alcohol, and the best clothes since those Elizabethan ruffle collar things. Fitzgerald’s novel slowly and subtly peels back the glittery skin from it all and exposes the glamor for what it is: a naive and empty faith in the value of money—a bubble that is about to burst.

Luhrmann tells the story aptly with a dash of masterliness here and there. Mostly, I suspect, that’s due to the solid performances from everyone involved, particularly Leo, whose awkwardness with accents actually works for the not-quite-real Gatsby, and Joel Edgerton, who plays Daisy’s philandering, blue-blooded husband, Tom Buchanan. Leo’s no Robert Redford (sorry everyone) but he does a second-best job. The scenes between the two rivals are rare and electric with tension. Gatsby’s lavish parties are a delight to be a part of, even from the other side of the screen. Each set, prop, costume, and lighting choice was obviously very carefully considered for maximum effect. It’s safe to say there’s nothing subtle about this film.

But for the most part, that’s OK. The Great Gatsby is a wild ride, and we’re not behind the wheel at all. You know it can’t end well, yet you hope, like Gatsby, that fortune will favor you this one time.

I, for one, am hopeful that Baz Luhrmann can lose his fascination with CGI. We saw some foreshadowing in Moulin Rouge!, but it runs rampant in Gatsby. Huge vistas of the route between Long Island and New York are fine. Welcome, even, as it’s hard to picture how it all might have looked back then. But constant supertitles of Nick’s voiceover, literal castles in the air when discussing figurative castles in the air, and barely real-looking mansions—it borders on cartoonish. With a soundtrack full of anachronism and some sped-up editing once in awhile, it’s not wholly unlike R+J. But the real and often gritty locations of that movie as well as Strictly Ballroom make those quirks interesting and provocative, whereas Gatsby begins to feel like a graphic novel after awhile.

And the soundtrack gimmick (“Songs from another era adding some whimsy and also an otherworldly feel!”) grated. I found the fast-paced Jay-Z bits jarring in this setting, whereas Radiohead had seemed a fitting, lonely soundtrack for a cast-off, wandering Romeo. It’s as if Luhrmann used to allow himself to slow down once in awhile, but now feels obligated to maintain a breakneck speed. And while I appreciate his enthusiasm for remaking the greatest movie EVER MADE,3 and while it will certainly appeal more to adults than to teenagers, I don’t feel that the same devices worked quite as well with such a CGI-laden visual.

Yet, for all that, it’s two hours plus went by in a flash. You can’t say that about many movies, that’s for sure. Expect to see it in many categories next year at the Oscars, and (I can’t believe I’m saying this) treat yourself to 3D.

Huge spectacles are not your thing, just like glitter, fun, dancing, love, humor, murder, intrigue, bootlegging, pink suits, good-looking people, and fast cars aren’t your things. You should probably tend to the lucky objects that are your things, like snails, brackish water, and cold oatmeal.