The Girl with the Dragon Tattoo: Sweden’s Dän Brøwn

Even though I’m a couple weeks late on this, I decided to see The Girl with the Dragon Tattoo because 1) I’ve seen the Swedish version, and 2) the only other options were a movie about a horse who most likely dies in a weep-inducing fashion or We Bought a Zoo! Even though I’m a couple weeks late on this, I decided to see The Girl with the Dragon Tattoo because 1) I’ve seen the Swedish version, and 2) the only other options were a movie about a horse who most likely dies in a weep-inducing fashion or We Bought a Zoo!

So, off I went to the movies by myself. I’ve only ever seen two movies in the theatre solo: Eyes Wide Shut and The Girl with the Dragon Tattoo. Both times I’ve felt pretty awkward, but not as awkward as I would have felt taking someone there on a first date.1 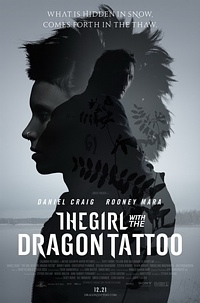 The movie starts with Blomkvist losing a libel trial to one of Sweden’s rich and powerful business tycoons. His future with both the magazine he works for and the boss he sleeps with is thrown into question. Meanwhile, Lisbeth Salander is hired by Henrik Vanger–the patriarch of one of Sweden’s oldest families–to conduct an indepth, less-than-legal background check on Blomkvist. She’s on call with a security firm as a “hacker”–which you know because she uses Terminal.app on her MacBook. She even writes some SQL!3

As Blomkvist awaits his prison term, he gets a call from Vanger’s lawyer offering him a job to investigate the 40-year-old disappearance of Henrik’s favorite niece, Harriet. The Vanger family has plenty of secrets to go around and about half of them involve aging Nazis, so of course Blomkvist accepts the job, requests Salander as a research assistant, and the mystery’s afoot!

Now don’t get me wrong, I love a good mystery as much as the next guy who read The Da Vinci Code in two days, but we ‘re not talking about The Usual Suspects here. Dragon Tattoo comes replete with (predictable) twists, forensic science, and casual sex between investigators.4 Craig’s Blomkvist is bookish and grumpy–which sounds about right for an investigative journalist, but the problem is James Bond and his abs don’t really do a convincing “bookish.” The Swedish version nailed it by casting Michael Nyqvist–who’s just a normal looking dude.

You might remember Rooney Mara as the girl in The Social Network who dumped Mark Zuckerberg not because he was a nerd, but because he was an asshole. She’s already been nominated for a Golden Globe for her performance in Dragon Tattoo, and I’m thinking she’ll get Oscar nom’d too. Mara does a good job playing Larsson’s Lisbeth, but he’s written a pretty one dimensional and wooden character. She doesn’t do much other than smoke, ignore questions, and solve mysteries. She also gets raped.

I think the excruciating, awful, gut-wrenching rape scene is one of the reasons this movie has an 86% on Rotten Tomatoes while The Da Vinci Code has a 25%. I also think it’s one of the reasons Mara will be nominated for an Oscar, and rightfully so. But take out that scene and you’re left with an American remake of a Swedish mystery movie without any of the cool Scandinavian vibe. Not only that, but what does it say when we are so excited about such explicit violence towards women? And most disturbing, at least to me, is that Salander gets revenge on her rapist by raping him. In my book, this is not a victory.5 But, Lisbeth moves on, shrugs off the whole experience, and goes about woodenly solving mysteries. The only clue we have that she’s been affected at all is a bad dream here and there, or her reluctance to be touched (sometimes).

However, the best part of Dragon Tattoo is easily Trent Reznor. Dude has discovered a serious talent for scoring films, and I hope he keeps it up. Reznor, and collaborator Atticus Ross, won the original score Oscar last year for The Social Network, and they should be nominated again this year. Their cover of Led Zeppelin’s “Immigrant Song” with vocals by Karen O (of the Yeah Yeah Yeahs) is awesome, but opens the movie paired with a totally weird non-sequitur of a title sequence. But whatever, the song rocks.

So, should you go see The Girl with the Dragon Tattoo? Honestly, I’d recommend the Swedish version over its American counterpart. Sure, you’ll miss out on Trent Reznor, but you could just buy the soundtrack. What you’re really missing in the American version, and what the Swedish version does so well, is subtlety.

An example: in the Swedish film, after Lisbeth is violently raped she staggers home, her insides wrecked. It’s painfully obvious to the audience what’s happened and why she can no longer sit down. In the American version, before her rapist begins he says, “Oh, I forgot to ask, do you like anal sex?” Why would you breakup a fast paced and emotional scene to insert, what is tantamount to, a joke? We don’t need to be told that’s what’s happening, we can see it. Also that line changes the character from a normal guy that I could encounter in my day-to-day, to a more nefarious villain–which is less scary. There are other examples of this type of thing6 scattered throughout the film, and each one makes things more obvious, less creepy, and more…American, I guess?

Save your dollars on this one, folks, and instead, feed it to the Redbox.