The Campaign: Shock the vote

In an election year that is sure to dismay rational thinkers, The Campaign is an entertaining comedy with a bone to pick. I’ve got a soft spot for Will Ferrell, and, while I’m on the subject, Zach Galifianakis too. Plus, political comedies? Who can resist!?

Answer: you. But only until the DVD comes out. For while The Campaign will elicit several LOLs, you don’t need to move heaven and earth to get into the theatre. Save that for…well, I’m not sure what. But certainly something more breathtaking. 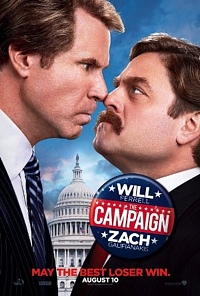 It’s election year for normally-unopposed U.S. Congressman Cam Brady (Will Ferrell). He’s got good hair, a tight platform (something or other about Jesus and freedom…even he’s not sure what that means), and a history of winning with no problem. Lately, though, his overt “I can get away with whatever” antics have gone above and beyond inappropriate, finally affecting the polls. So the super-rich Motch brothers, a thinly veiled reference to the real-life Koch brothers, decide to turn to another guy in the district. One who can be molded into whatever they want.

Lord have mercy on North Carolina, it turns out the GOP hopeful is Zach Galifianakis at his most unsettling. Marty Huggins is a portly guy with sibilant speech who trots pugs around town and eats Twizzlers cheerfully. At first glance, he’s not cut out to be a congressman. But as we probe deeper, we get more and more confused about what a congressman ought to be. Brady certainly seems despicable–he’s a Democrat who’s just in it for the career opportunity, boffing any woman in sight as his wife looks longingly at his poll numbers. But is Huggins any better? He bows to the Motch brothers’ whims just as easily as Brady has in the past.

The most intriguing thing about this movie is the lack of partisanship. The jokes fly fast and furious, and the jokes are good, but the main message is that both parties are broken. As spectators, our loyalties are divided because we’re not sure who the crap we’re supposed to be rooting for. Is it Brady with his empty promises and sickening extracurricular activities? Or is it Huggins with his blind reliance on slick, sponsored campaign managers like Tim Wattley (a surprisingly creepy Dylan McDermott)? Perhaps they’re equally as detestable. Or perhaps they’re equally as sympathetic. After all, everybody wants a career.

It’s up to you who you feel sorry for at the end. The clear villains here are not one side or the other: they’re the Motch brothers. That is, big business. Director Jay Roach downplayed party lines in order to emphasize the fact that neither side of the aisle is to blame for the state of things these days. And to back him up, the preposterous things the candidates do are funny, but not unimaginable. I wouldn’t be surprised if a campaign commercial featured an illicit sex tape at one point in my lifetime. Would you?

In the end, the laughs and the message outweigh any of the films silly and forgettable flaws. Not only did I guffaw mightily with everyone else, I applauded the cleverness of each joke. Our politicians suck, and this film makes the most of it.

You don’t find political humor funny. In which case, I caution you to bury yourself in a large hill of sand for the next 90 days, because otherwise, you won’t survive 2012.