The Artist: everything you ever wanted to know

For the record, I really wanted this review to have no words in it, but I was shot down. This year’s Academy Awards have come and gone, but if you live in a city that gets most awesome movies late, if ever, you’ll get a chance to relive the glory for the next couple of months. As you may have heard, silent film The Artist won about a trillion awards, including Best Picture, Best Actor, Best Director, and Most Adorable Acceptance Speeches. 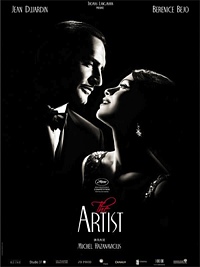 “A silent film!” you exclaim. “What on earth? How will I hear all the explosions?”

The Artist HAS no explosions! It has no violence, no sex, no genocide, no swearing (and if it did, we wouldn’t know). In fact, it’s the first movie to win Best Picture that hasn’t been rated R since 2004.

What The Artist DOES have is a lot of tap dancing. Tap dancing and an incredible attention to detail that pays homage to the, you guessed it, silent films of the early 20th century. Director Michel Hazanavicius took every possible measure to produce a film that looks, feels, and sounds (?) like one from the Twenties. He uses the same aspect ratio, applies filters and such, undercranks so as to get that slightly sped-up effect, it’s all there. Except where he wants it not to be. Hazanavicius plays with sound in a way that could have gotten gimmicky but ends up 100% rewarding. There are some really cool “We’re not in Kansas anymore” moments, and it ends up being just as memorable and exciting.

The major difference, of course, between this film and its predecessors is the subject matter. Hollywood’s hottest silent film star, George Valentin, is handsome, charming, and constantly accompanied by a really cute dog. A triple threat for moviegoers then and now. He’s played by Jean Dujardin, who not only has a killer smile but wears slicked back hair and tuxes like it’s no big deal. Valentin is a pretty good dude and does what he can to help Peppy Miller, a, uh, peppy aspiring actress who just happens to be dang sexy. George and Peppy (played by Bérénice Bejo) are continually drawn to each other in cute ways that involve dancing, but the tide of cinema is turning, and the the studio drops George’s films in favor of the new “talkies.” Peppy, however, fits right into the talkie culture, and tables turn.

So we have a silent film about the advent of non-silent film. And just like with the really well-made films of that era, you begin to forget that you’re even watching people speak instead of listening to them. Now THAT is great acting.1

I should mention that The Artist is a French film, in that it has French writers, directors, actors, and producers, but it was filmed in LA with a number of notable American actors as well (James Cromwell, John Goodman). This French-film-in-American-context situation is reflected in the film itself, although to explain more would spoil things for you.2 In fact, everything about everything is reflected in the film itself, and I’m not trying to be confusing. It’s meta, but in a pleasant, easy-to-figure-out way. The Artist is a celebration that does enough interesting and unexpected things (and includes enough tap dancing) to make it an innovation in and of itself.

You’re blind or deaf. There’s a lot going on here with sights vs. sounds, and you’ll need both of those senses IN ABUNDANCE. You might also want to stay home if you prefer explosions. It will also be an excellent film to see at The Byrd on a Saturday night in all the Mighty Wulitzer glory. Meta.