Studying the history of ballet without cracking a book

The Richmond Ballet’s Studio 2 showcases the breadth of talent of its performers, lighting designers, and commissioned choreographers. All you have to do is take it all in.

I don’t know what you were doing on Thursday night, but if you didn’t hear the thundering of lots of talented feet, you weren’t listening hard enough. On second thought, that’s probably not the right thing to say, as the Richmond Ballet wasn’t really “thundering” so much as they were “doing amazing feats with their incredibly lithe bodies that certainly didn’t seem to weigh heavily on a stage floor.”

That’s right, the Studio Series 2 is now open. The current program features three different dances that, according to founding artistic director Stoner Winslett, runs the gamut of 20th century ballet, showcasing the company’s diverse talents so aptly that you are liable to go home feeling really clumsy in comparison.

Ballet’s legendary George Balanchine choreographed the first piece, Glinka’s Valse Fantaisie, during which six dancers soar classically in a cloud of pink tulle. It’s ballet at its most recognizable — everyone doing what you most expect from people en pointe. At the show I saw, the magnetic Valerie Tellmann led the company with a cheerful talent, while David Neal provided the grounding force.

But these dancers, Winslett informed us, switch roles for each successive performance, exhibiting the breadth of their ability. And when the next dance begins, you start to understand why that’s such a daunting mission. Low lights and nude bodysuits set the tone for John Butler’s After Eden, with music by Lee Holby, first performed in 1965. One male and one female dancer represent Adam and Eve, after their fall from grace, and the jarring, emotional steps drive home the point that life wasn’t really all that swell after the doors of Paradise slammed shut on the Biblical first humans. After Eve springs from her coiled position around Adam’s ribs, the desperate, yearning expression on Maggie Small’s face and in her reaching movements contrasts with Fernando Sabino’s resentful, harsh angles. The most emotional moment of the program, After Eden sends you into intermission feeling simultaneously drained and impressed. 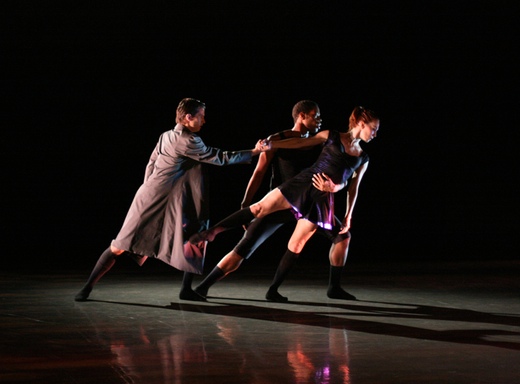 Colin Connor’s triumph, Always, at the Edge of Never, comprises the entire second act. Commissioned by Altria, the sponsor of the series, and enjoying its world premiere right here in Richmond, the piece employs dramatic costumes by Charles Schoonmaker and seriously genius lighting by the ballet’s own MK Stewart. Think 1984, with trench coats swirling in an industrially stark mood as a neon bar of bright red light begins the act at the top of our vision, moving downwards infinitesimally until the mixed group of dancers begin to incorporate it into their movements. Meant to instill tension, a beginning and an end, into an otherwise non-narrative piece, the light manages to keep you at the edge of your seat, without you even realizing it, until the sometimes-dissonant Kimmo Pohjonen music comes to its close. Dark, energetic dancing on the feet, on the knees, and rolling on the floor, brings us to the most contemporary aspect of ballet as the company ends their showcase by following dance up to the most modern minute.

You’ve got until November 14 to allow yourself to be educated on the last 100 years of ballet in only about an hour and a half. Whether you know anything about the discipline or you’re just interested in sitting back and being amazed, yet again, by this hotbed of incredible local talent, you’ll be in the right place.