Stoker: Not a vampire movie 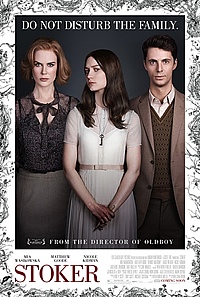 I walked out of Stoker muttering, “No way, Jose.”

The director of Oldboy brings you…Stoker! A disturbing tale about how some people are just really into killing other people and, weirdly enough, about how that’s OK? I don’t know! I didn’t write the thing! The guy from Prison Break did! And the script is only so-so, with potential for creepy greatness but not enough buildup or exposition in areas where it’s sorely needed and too damn much of it in areas where it’s not.

Yet, the directing, cinematography, editing, acting, and basically every other aspect flirts with perfection.1 Chan-wook Park’s beautiful film is filled to the brim with deliberate pacing, masterfully framed shots, illuminating flashbacks, and a color palette to die for. He’s created a stately and slightly dilapidated estate in…Tennessee, maybe?…where India Stoker (Mia Wasikowska, who is insanely talented) and her mother Evie (Nicole Kidman, who has still got it) mourn the sudden death of India’s father and Evie’s husband Richard (Dermot Mulroney, who is not Dylan McDermott). India and her mother have some seemingly standard teenage girl tension, but it’s exacerbated to the max when Richard’s estranged brother Charlie (Matthew Goode) shows up. Goode appears to have walked straight over from the soundstage of A Single Man, a film by the impeccably dressed Tom Ford about impeccably dressed dudes. He’s handsome, he’s well-dressed, and he confidently drives a really cool car. Lonely Evie is smitten immediately, but India is simultaneously intrigued and repulsed. Even if Charlie hadn’t quickly done a few really evil things right off the bat, India wouldn’t be stoked on this new Stoker trying to take her dad’s place.

Then things take a turn for the poorly-written. India’s meant to find a kindred spirit in her uncle, but why? The film’s introduction is India’s voice-over as she looks calmly out from the side of a road onto a bucolic field of flowers. She says something to the effect of, “We’re all just pieces of what came before us, and we’re not really responsible for our behavior. Get your mind around THAT, amigos, and you’ll finally be free!”

Okaaaaaay, but India never shows any inherent evilness until she witnesses a murder. It affects her in surprising ways2, and suddenly we’re supposed to think of India as this psychotic teen. Wasikowska doesn’t play Sly Woman as well as she does Sullen Young Lady. Her abrupt transformation is a big slip-up in the script and should have been built gradually in a way we could get behind (or rally against, whatever you think is best). And when she and Charlie start teaming up, it just doesn’t jive.

But, the longer I think about it, the more I’m willing to forgive the things about Stoker that made me feel panicky,3 give the script a free pass and hope for better luck next time, and turn the rich symbolism and quality filmmaking over and over in my head for awhile.

You saw G.I. Joe and wanted to chase it with something that would give you hope for the future of filmmaking.

See footnotes. I had nightmares.