Oliver Stone’s new shoot-em-up is both empty and bloody. Kinda like life, you know? JK, it’s not like any of your lives–they’re probably be more interesting. 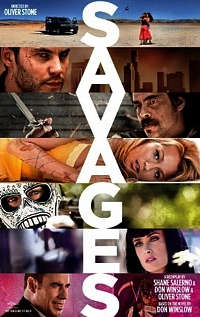 No wait, scratch that. At first glance, the trailer makes Savages look like a film about all those things. Our first impression of the film itself exposes those underdogs for exactly what they are: privileged white males living the good life under a mistaken impression that “growing marijuana” equals “saving the world and the environment.” Chon (a completely underused Taylor Kitsch, who I’m afraid is starting to be typecast into meathead roles instead of sensitive, noble jocks like he deserves) and Ben (the adorable Aaron Johnson, who you may remember from Kick-Ass) share some boring trade secrets, a sweet house in Laguna, and the languid caresses of a neo-hippie girl named Ophelia (Blake Lively).

Since it’s a movie about the drug trade, there are obviously going to be some intimidating Mexicans, right? It surprises me that respectable actors like Benicio Del Toro, Salma Hajek, and Demián Bichir don’t balk at playing members of a drug cartel. Their characters seem to have at least worked for their status, however shadily, but we’re stuck rooting for doofuses Ben, Chon, and Ophelia. Why do they get to be the good guys? They still sell drugs, right? Well, they have vague goals to save the planet one day as they drive around in sports cars and shop at Manolo Blahnik. They’ll never go to prison because they’re too beautiful, and they’ll never get tired of their own little love triangle, because “they all just love each other so much.” The Mexicans are not so naive.

So thank the heavens that the bad guys decide to kidnap Ben and Chon’s little designer beatnik ladyfriend in order to prod the two bros into working for them. Boom! The Oliver Stone bloodbath begins!

“What if we go to jail?”
“O IS REALLY IMPORTANT TO US! WE CAN’T LEAVE HER WITH THOSE MEXICANS! UGH, MEXICANS!”

“I don’t want to kill anyone!”
“WE LOVE O! OUR SHARED GIRLFRIEND! SHE IS VERY SWEET AND WE BOTH LIKE TO DO HER A LOT.”

“This is so dangerous, I am scared.”
“IF I DON’T GET TO HAVE SEX WITH O IN MY OUTDOOR CONCRETE BATHTUB SURROUNDED BY ROSE PETALS AND EXOTIC FABRICS I WILL LITERALLY DIE, SO TAKE THIS HAND GRENADE AND SHUT UP.”1

Over and over, they push themselves to do heinous things that don’t jive with their utopian view of Stonerdom so that their helpless damsel can be reinstated to her former life. No matter that her former life seems to consist entirely of lingering caresses and draping tapestries, luxurious order must be restored!

Stone’s got the chops to pull all of this off and more, provided he’s not working with a screenplay as sluggish as a pothead at 4:35 in the afternoon. Allow me to be blunt: Savages drags on until it burns out with an ending that just sparks more animosity. Maybe the book nailed some of the “We’re all savages in our own way” theme that Blake Lively’s weak narration overemphasizes again and again, but the film fell seriously short.