When Beau Cribbs first met the writers and performers who’d help him create RVA Tonight with Beau Cribbs, Richmond’s first live late-night talk show, he told them not to worry.

“I have been hosting a show like this in my head since I was 8-years-old.”

Cribbs, communications manager at Capital Results, a public affairs and consulting firm, has been versed in the late-night talk show formula since childhood. “I used to stay up late and watch David Letterman in the summer,” he said. “Mom used to let me stay up late.”

Comedy led him to improv in high school, some stand-up in college, but not much beyond that. “It’d been a really long time since I performed on stage,” Cribbs thought to himself earlier this year. Being friends with Matt Newman–who runs the Coalition Theater on Broad Street–since the fourth grade, Cribbs knew a stage was close. “I knew I wanted to do something,” he said. “But I didn’t know what.”

Epiphany struck while visiting former college roommates in New York City last spring. “We went to the Upright Citizens Brigade Theatre in the East Village,” Cribbs said. What played that night happened to be  Showtime with Anthony Apruzzese. The premise–a monthly show in the late-night format–seemed odd to Cribbs at first, but he decided to go in anyway.

“Their show is intentionally low rent. Their ‘band’ was a guy on a keyboard. The desk was very clearly a bench with a bed sheet over it,” Cribbs said. “And it was really, really charming. It was high-quality, but it was also done in a way that it looked like it was done in someone’s basement.”

A light bulb went off. “Why don’t I do something like that?”

He’d learn similar late-night shows exist across the country in places like Atlanta, Chicago, and others.1 “So this is not a new idea,” Cribbs admitted. “But to our knowledge, it’s the only time someone’s tried to do this in Richmond.”

Cribbs enlisted the people associated with the Coalition Theater to help write and perform the show. “A lot of them are on house improv teams, and some of them have taken classes at the theater,” he said. Of the 12 that came on board, Cribbs knew only half of them. The other half “were people I had either met once or twice, maybe never met before. I just thought they were funny.”

After establishing the roster of writers, Cribbs led meetings leading up to the premier show in June. “We would meet every Sunday afternoon” for about two hours. The team still meets regularly and keeps in almost daily contact via email and Basecamp.

Working within the late-night talk show form provides a clear blueprint. “There’s a monologue, there’s a little comedy piece at the desk, you’re going to talk to a local celebrity, there’s going to be music, maybe there’s a stand-up comedian–you know where these things fit into the formula,” Cribbs said. “The roadmap’s there. Steve Allen was the first one to do it even before Johnny Carson. Everything you see on TV right now is a scrambled version of what Steve Allen did back in the 1950s.”

“What’s fun is trying to figure out what’s new and interesting to do around the format that everyone does,” he said. One way RVA Tonight deviates from its TV counterparts is that Richmond’s late-night show produces its own commercials. “That’s one of the cool things that people don’t expect. I’ll say: ‘We’ll be right back after a message from our sponsors'” and writers of the show perform SNL-like commercial parodies. 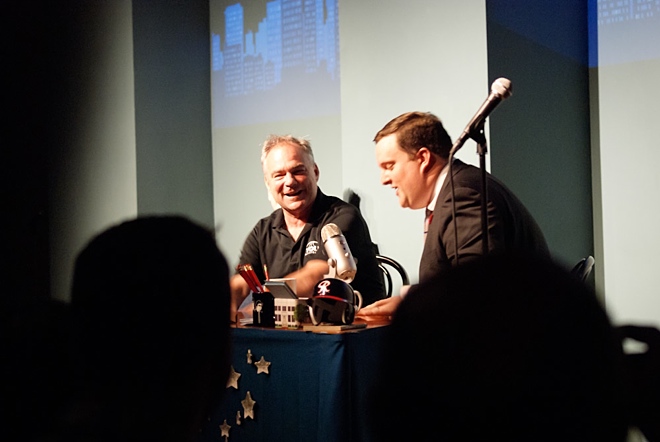 Cribb’s on-stage persona isn’t contrived à la Stephen Colbert on The Colbert Report. “It’s as close to a regular, loose interview with me as possible,” Cribbs said. “I feel like the interviews have gone fairly well because I’m just asking questions that, if I were sitting in the audience, I would want to know from these people.”

Instead of grilling Ryan Nobles about the ongoing McDonnell trial, “I asked Ryan about memorable things he’s covered over his career. We talked about the Final Four, we talked about Eric Cantor losing in the primary, things like that.”

Cribbs is still amazed that both RVA Tonight shows thus far have sold out. When Cribbs spoke last week, he said roughly half of tickets for the next show, on October 3rd, had already been sold. “The reaction has been amazing,” he said. “I’m so happy and excited that people have latched onto it.”

Although the work remains fun, and a labor of love as Cribbs makes no money from it, RVA Tonight is still work. “I have a new respect for the people who work on these types of shows” five days a week, Cribbs said. Producing shows every two months is challenging enough. “We’re all figuring out how to best put it together.”

He hopes the RVA Tonight team can become a well-oiled machine, enough that they can produce shows monthly. “I would love for us to be able to do this once a month, but I’m realistic enough to know that it’s been a mountain of work the first two shows, and I don’t want to take any years off my life trying to do this once a month,” he said. “I also just want it to be fun. I want it to be something new every time you go to the show, and I want people who come to show to know that they’re going to get a really solid product up on the stage.”

RVA Tonight returns October 3rd with guests Reggie Pace, Jennifer Lemons (The Checkout Girl), and a performance by No BS! Brass Band. “Having No BS on this teeny, tiny stage is going to be a funny visual,” Cribbs said.

What’s impressed Cribbs the most so far is the talent in his team. “I have been blown away by the creativity of the people that I’ve been working with,” he said.

“I am so happy to be able to have this big show once every couple of months because it gets some of my friends who have heard about [the Coalition Theater], but haven’t gone, in the door,” Cribbs said. “And its wonderful.”