Worlds collide in a typically graceful and beautiful way at this year’s New Works Festival. The New Works Festival is arguably the most exhilarating performance of the Richmond Ballet’s season. Perhaps some of the ballet superstars are meeting their life goals by dancing Swan Lake or something, but for audience members, the four short premieres tend to be avant-garde in style and energizing to watch.

Four choreographers descend upon these dancers, trying out a new idea that will be learned and executed in just a couple of weeks. This year, choreographers include Katarzyna “Kate” Skarpetowska, Rex Wheeler, and Nicole Haskins.

“I choose these choreographers from people from all over the world who want to create here in Richmond,” says Artistic Director Stoner Winslett. “And who want to work with the collaborative artists found here at Richmond Ballet.”

For the second year running, an RB-er makes up the fourth composer of the group. Matthew Frain, on his third year in the company, and known for his work in Fancy Free and as the Ugly Stepsister in Cinderella, goes back to his metal roots for his new piece, Inventory.

Well, maybe he’s not going back anywhere. Frain does and has enjoyed heavy metal for years, possibly just as all-consumingly as his relationship with dance. He happens to be friendly with metal star and Richmonder Randy Blythe of the band Lamb of God. Home from tour once, Blythe played Frain some snippets of music with which he’d been experimenting. “I’d been having trouble finding music to fit the image or the feeling I wanted for the choreography I’d been thinking about doing,” remembers Frain, “But this was totally the kind of thing I’d been wanting.”

I can hear those with more delicate constitutions almost audibly balking at seeing a ballet set to metal. But Blythe’s music only shares some qualities of metal–the moods and the tones, the droopiness. “I think a lot of times, the artistry and the musicianship [of metal musicians] is overlooked in favor of, like, ‘Who’s more brutal than the other??'” says Frain. 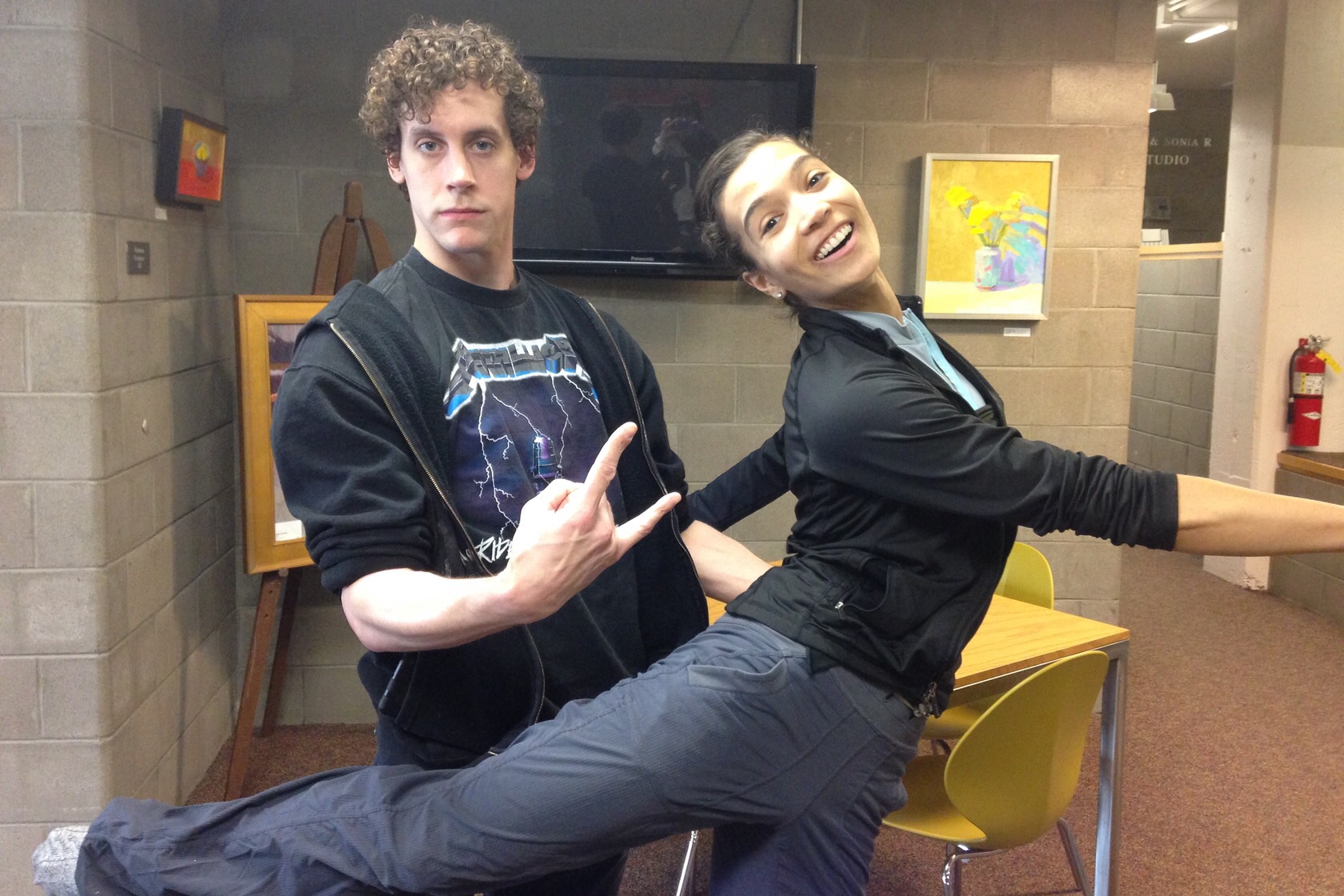 Matthew Frain sporting his favorite metal duds, with Maggie Small, who was gracious enough to strike a pose and unlucky enough to walk by just as I needed someone to.

His piece harnesses “some dark elements,” and arranges four dancers in a loose representation of how Frain’s life and perspective have changed from even a few years ago. “I used to fall back on a goofy mentality of ‘If I make them all laugh, I don’t have to show them all what’s going on in here,'” says Frain. “And that’s what the piece is about–honesty and moving on from stuff that can stick with you for a long time as it continues to hurt you.”

“It’s always hard to explain the juxtaposition of ballet and metal,” insists Frain. “But it’s not like I’m an anomaly–it’s all very theatrical stuff.” 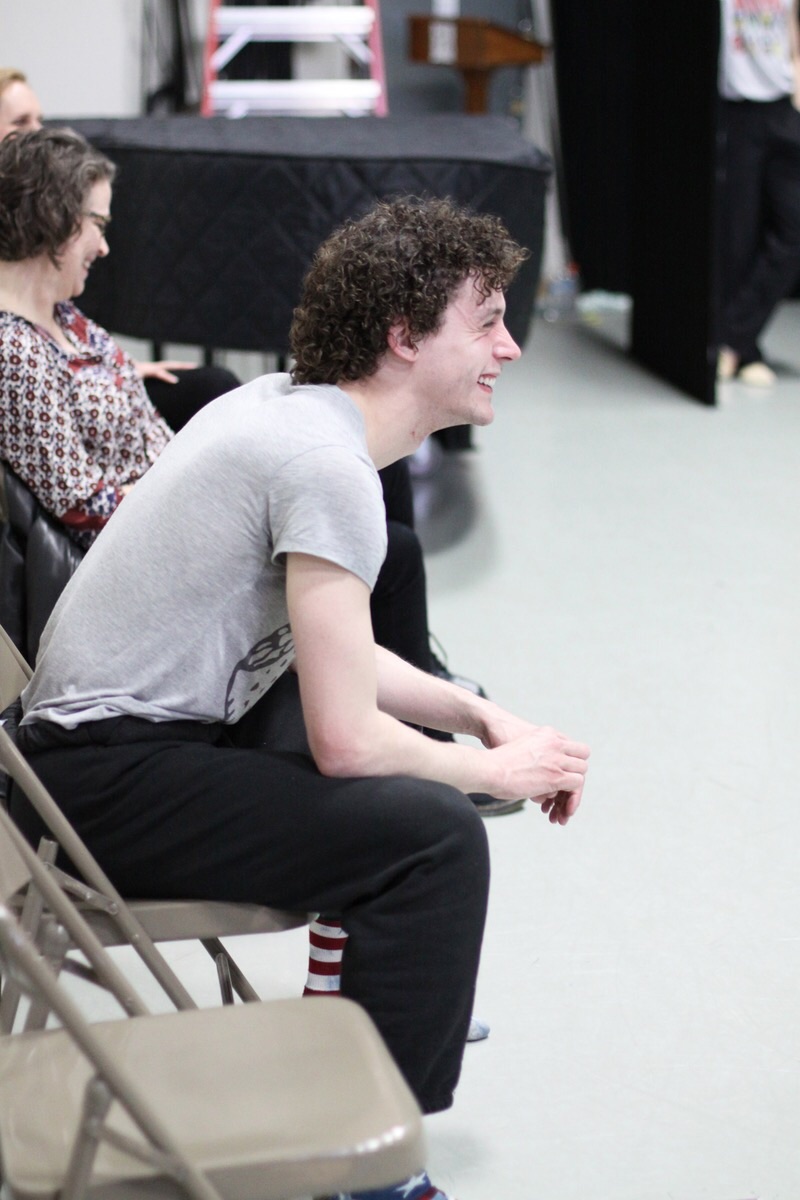 RVANews is a big fan of Blythe AND a big fan of the ballet (I’d link to something here, but there are too many), so it’s easy for us to see the appeal of combining the two.

But is it appealing to you? Let’s find out!

If you’re still interested after a close listen, you may proceed to:

And maybe, if you’re still feeling good about all of it, you can advance to:

Say you already like metal, but you want to see if you might join your brethren in the cross-section of this Venn diagram and find out whether you like ballet as well!

Chances are that you, as a metal fan, enjoy very precise and very difficult instrumentation, yet you also relish a well-expressed feeling, even going beyond metal’s angst. The new stuff is often expressive (though not always angsty) and Ballanchine is technically demanding.

The rest of the fest

All of this aside, the New Works Fest consists of Matthew Frain’s Iventory and…three other pieces! And that’s the best part, you get a grab bag of very different experiences for just one ticket.

Catch the last three days of performances of the New Works Festival this Friday, Saturday, and Sunday at the Richmond Ballet, 407 E. Canal Street. See site for schedule and various ticket prices or call (804) 344-0906.