OK, things need to start getting sloppy over at the ol’ RB, because yours truly is getting a little bit tired of trying to find new ways to spin glowing praise. Yet, like those perfect, musclely, beautiful jerks, I must be true to my craft.

One thing I discovered fairly quickly when I began to write movie reviews: it’s a lot more fun to lay into a terrible production than it is to praise the good ones over and over. So I’ve got a bone to pick with you, Richmond Ballet. These fan-girl litanies I keep cranking out are starting to get pretty, pretty old (not to mention borderline creepy*).

Yet, I can’t see any way around it! Every single thing that the decades-old institution does ends up strengthening the overall impression that these people are super stoked on their chosen form of expression. And I mean ALL of the people. Artistic direction, sets, costumes, lighting, music, and, of course, the dancing itself — all of these elements are pulled off with obvious enthusiasm and impressive skill.

In no way do you need to have any dance experience or knowledge to enjoy the ballet.** Having made a lot of first-time forays into the world of performing arts in the past few years, I can honestly say that the ballet is as visually stimulating as an art exhibit, more accessible than the opera, more athletic than a sporting event, and certainly more entertaining than the vast majority of major motion pictures. In fact, the Studio Series is probably not what you think it’s going to be at all. It’s a showcase of classic, contemporary, and original works that highlights every part of the spectrum.

So instead of gushing as usual, I thought I’d gather some information together for your consideration. This extra knowledge added another layer of appreciation to an already stunning form of expression, and they are my gift to you, prospective ballet-goer.

Turns out, dancing is hard — I spoke to David Neal, who dances Harpo in other performances during the run, and he patiently explained to me that, basically, the classical piece is wicked hard to do. “It’s fun, though, because it’s so technically demanding. You never feel totally comfortable because you have to be completely focused or the whole thing will go up in flames.”

Bros syncing up with other bros – Neal also pointed out that female dancers are classically trained to be part of a corps, but a male-centric piece such as this one shoves these dudes out of their comfort zone. For such a difficult workout, it all comes across as wonderfully light-hearted and effortless, but then again, all I had to do was sit there and watch. 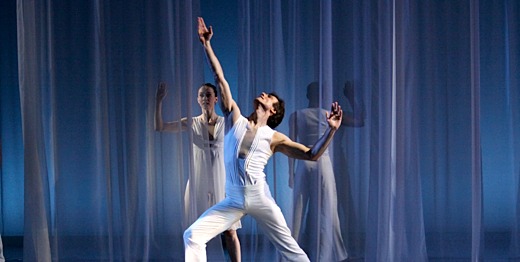 Female choreographers make a difference — Octavo, the second part of the program, is another world premiere. Inspired by the contemporary compositions of Max Richter, Gina Patterson choreographed this very modern number. I asked Valerie Tellmann, one of the company’s veterans and a Richmond native (woot!) (go Rams?),*** how she felt about Octavo. “It offers us a lot of range,” she said, going on to describe the dynamic between Patterson and the company. Apparently, female choreographers are few and far between, so it’s good to have someone like Patterson to work with — someone who understands exactly where the ladydancer is coming from.

Emotions! They’ve got ‘em! — It’s an emotional piece that feels like it’s about connecting people together. As Patterson termed it, it’s a “meeting place” that connects everyone who’s worked on the show to everyone who’s viewing it. We all come together for 30 minutes in this one space and time. I liked the idea of the shared experience. You have the choreographer’s passion, the composer’s passion, the dancer’s passion, and your own interpretation of it all. We all may be emoting differently, but it sure does fit together well.

A composer in the house — The ballet’s a/v engineer, Dave Watkins, composed music to dovetail with Richter’s, helping Patterson create the specific combination of intensity and playfulness that best fit her vision. “It was a huge compliment to be asked,” said Watkins. “But the biggest compliment of all was knowing someone was listening to something so amazing before coming to you to fill in the gaps.” The effect is a seamless one, and I look forward to hearing more of Watkins’s music in the near future.

It’s….really short? — OK, I’m not saying I wouldn’t be thrilled if the program went on and on, but this particular Studio clocks in around an hour total. So if you’re prone to dozing off during longer productions, don’t worry. Just two short halves before you pick your jaw up off the floor and stagger home.

* Don’t be mad, but at a reception, I may have insisted that some dancers start hanging out with me on the regular. Worse, I also may have demanded that they just admit outright that they can’t stand being around people who aren’t made entirely of muscle. In my defense, they were really intent on refilling my wine glass all evening, which is a little like feeding Gizmo after midnight and then wondering what the hell is up with his skin.

** I believe I’m your case in point, my non-graceful brethren!